Share
Tweet
Share
Pins
Share
Like
….from town to town, I’m a real cool head, I’m makin’ real good bread” A trip to Canvey Island on a wet, wild and windy April afternoon probably doesn’t feature in any Top 100 Days Out in England programmes, but for Lewes fans it was going to be THE place to be.  Through a combination of favourable results and some excellent performances, the Rooks came into the second to last game of the season still in the play off spots.  Granted Wealdstone and Cray Wanderers had games in hand, and the momentum was with The Stones, especially after their 6-0 away at keeper-less Tooting & Mitcham United in the week, but every manager knows it is better to have points in the bag than games in hand (that is unless you are the team with games in hand). 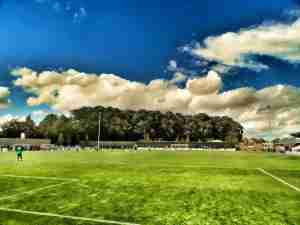 So this was our last away trip of a long season that had started for some of us back in early July with a friendly away at St Neots Town.  Fortunately, our hosts Concord Rangers had just ruled themselves out of the fight for the play offs and so they would simply open the front door and allow us to have the run of the house, right?  That is what normally happens isn’t it?  Perhaps they would also put a striker in goal for us like Tooting?  What are the odds of that? It has been a good season.  I had nearly achieved my aim of visiting every Ryman Premier League ground, although there was still hope that a play off place and a victory in the first game COULD take Lewes up to Bury Town which was my one and only missing visit (I was in Rome at the derby when Lewes visited back in March) and enjoyed every single one.  There is nothing like turning up at a new ground to see the same faces, drinking the same beer and talking about the same things week in, week out.  Familiarity never breeds contempt in these circles. And what would replace my travels over the summer?  Well, not that I was counting but it was only going to be 69 days after the final league game of the season before Lewes would be running out at Donkey Lane in the final of the Supporters Direct Shield against Enfield Town, and I did have a few little trips up my sleeve (Zagreb AND Belgrade derbies in same weekend thank you very much), so add in a few Rugby League games and a trip or two to the Touring Cars then I am sure I wouldn’t miss my fix. 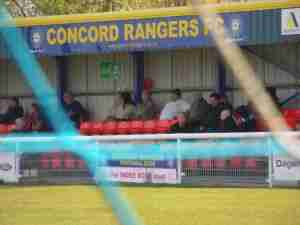 This was Lewes’s first ever trip to Concord Rangers.  The club have risen like a ghoul in Michael Jackson’s Thriller video through the local leagues since being formed back in 1967.  They finally gained promotion to the Ryman League back in 2008 after twice being denied entry for winning the Essex Senior League.  Two years ago they won promotion from the Ryman North and competed at this level for the first time last season, finishing comfortably in 8th place.  They are an ambitious side, living within their means at the end of a leafy lane in rural Canvey Island.  Very Terry & June it is two – well apart from the huge caravan park on one side of the ground, and the massive oil storage site on the other. The club are one of a rare few that have joint managers, who are both called Danny. In fact it seems to be the pre-requisite to be called Danny if you are employed by the club with top scorer Danny Heale, reserve manager, Danny Clare and Danny Boy.  Last season we visited them for the El Grande Islande Classico, aka the local derby versus Canvey Island. Whilst the Island, only has 37,000 people living on it, it has happily supported two teams who have a friendly rivalry for a couple of decades.  There was some paper talk earlier this season of a potential merger, but that is all it seemed to be.  Obviously it was a slow day in the Lobster Smack, the pub made famous by Charles Dickens in Great Expectations and our first port of call for the day. 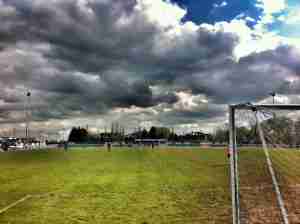 The Beach Boys (now do you get the musical intro?  Good Vibrations by the Beach Boys) had deemed this last game of the season a celebration of all that is good with football, and so admission was free, with an optional donation to a local charity.  A nice touch from a club I have always enjoyed dealing with. I picked up the LLF at South Benfleet, the nearest railway station to Canvey Island.  Deaks and Dave had packed their holiday bags – after all it wasn’t often we get to go to on an island holiday.  We headed down to the Lobster Smack for a pre-match stiffener.  “Have you got any ales on?” asked Terry.  “No, sorry luv”.  “Do you have a TV?” Joel asked, hoping to catch the end of the Arsenal game.  “Yes, darling…..but it ‘asn’t worked since that switchover thing last week”.  Fortunately they had plenty of flat warm Carling for us. We headed for the ground after the heady heights of the Lobster Smack.  In the ideal world we could have walked there from the pub.  After all, it was just half a mile away.  Alas in between the pub and the ground was a dirty great oil depot, with its razor wire topped fences, big dogs and unfriendly security.  We did offer to do our bit for the environment. Concord Rangers 2 Lewes 3 – Thames Road – Saturday 21st April 2012 Two weeks ago Lewes were denied one of the clearest penalties you will ever see in the game versus Aveley.  That penalty decision in the nil nil draw could eventually be the difference between a play off spot and not..  But today on Canvey Island that injustice was righted to an extend when referee, Lee Venamore gave the softest of penalties in the last ten minutes which Harry Harding converted and led Lewes to their fifth win in seven games. Whilst Lewes have had a bad habit of conceding in injury time this season, they also have a great habit of scoring very early.  And today was no different.  Just 93 seconds were on the clock when Chris Breach, again holding the midfield together, put the ball through to the red hot Nathan Crabb and his lob from distance bounced into the empty net causing Roger to almost drop his burger. Unfortunately because of the precarious position of the league we probably spent more time in the first half looking at scores elsewhere than the Lewes performance.  Everything was almost going our way.  Almost.  But then we forgot the fact we actually needed to hold onto the lead and despite Ingram hardly being troubled in the first thirty minutes (bar one shot he let go that hit the post), all of a sudden Concord Rangers were level when a harmless ball eluded the Lewes defence allowing the Beach Boys to equalise (probably scored by a Danny). 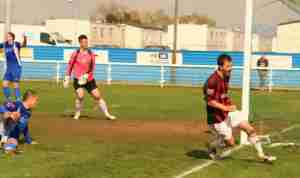 That goal wasn’t in the script and we headed to the bar at half time downcast, especially as the results around us were in our favour.  But the reason why we love football is that it can change in a heartbeat.  And so just fifty seconds into the second half we were back on cloud nine as Paul Booth jinked, shot, the keeper could only parry the shot and Nathan Crabb was on hand to score.  High fives all round. But the lead didn’t last long.  Concord refused to lay down and equalised with a brilliant free kick.  The fate of our season was once again in doubt.  But then the officials took over.  Substitute Hopkinson seemed to over run the ball in the area and a defender muscled in front of him to shepherd the ball out.  Hopkinson fell, the referee pointed to the spot. 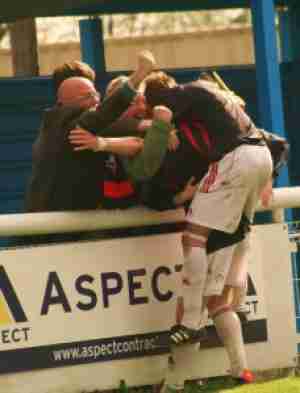 With Paul Booth off the pitch, one of the youngest in the team took responsibility.  Harry Harding blasted the spot kick home and ran to Cynical Dave to celebrate.  Or is that Cuddles Dave from now on – the players cuddler by choice. Concord were quite rightly furious, and in the ensuing moments they lost one of their managers (at a guess, called Danny) for his protestations. We willed the final whistle and when it came the sense of relief that washed over the traveling fans and players alike was huge.  Wealdstone, Hendon and Canvey had all won, meaning the final play off line up would go down to the last day of the season.  Who would have thought that six weeks ago when the team had lost away to Bury Town, relegating them out of the play offs, they had gone eight league games without a win.  Since then the Rooks had played ten games, winning seven and drawing two.  Ninety minutes is now all we have left, to dream what might be. One, two, three, four…Essex has the sunshine, and the girls all get so tanned. I dig a french bikini on Canvey Island dolls, by a palm tree in the sand.
Share
Tweet
Share
Pins
Share
Like

DOWN BY THE JETTY – Canvey Island

Some 30 miles from the centre of London in an easterly direction you will find Vange Creek which separates mainland Essex to the alluvial island known as Canvey Island. Formed fro...