It’s not a results business is it?

“Well I want you to understand somethin’. To me, being perfect is not about that scoreboard out there. It’s not about winning. It’s about you and your relationship to yourself and your family and your friends” So much pressure is put on sports players to perform. Win at all cost seems to be the motto at all levels of the game we should love. And why should we love it? Because it at the end of the day it is supposed to be a past time, something to enjoy, to relieve our stress of an ever increasing hard life. But there is more to life than the pursuit of winning. There is enjoyment. Relevance? Well ask any of the 600 or so Lewes fans how much they enjoyed the second half of the game versus Hendon last week. Whilst the last few minutes were nervous to say the least, the outstanding display from the team in the opening period of the half was scintillating. Attacking football, played with heart, passion and belief is all that our fans can hope for.

I have been brought up watching West Ham. The Academy. Brooking, Devonshire, Di Canio. Happy to be losing 4-3 than grinding out a 1-0 win. That is why so many people used to consider the Hammers their second team. But all of that has changed now – money has become more important than enjoyment and so it is all about the result and not the performance. And that is why I get my kicks at the likes of Aveley’s Mill Field, one of the least aesthetically pleasing grounds we will come across on our tour of the Ryman Premier League this season. Looking up Aveley on the internet, you can find very little information. Apparently it is named after Aelfgyth’s wood clearing, although quite who or what Aelfgyth is or was is not known. It sort of blends in with Thurrock, Purfleet and Rainham just north of the Thames close to the Dartford Crossing. The club not only have to fight for fans with the dozen or so non league teams within a 15 minute drive but also West Ham, Dagenham & Redbridge and Arsenal. It is no wonder then every season they can survive without sliding backwards is celebrated. But the good times were about to take a bit of a dent. Any other result against Lewes and they would be re-acquainting themselves with the Ryman League North next season, whilst Lewes could just put themselves into the race for the final play off spot. 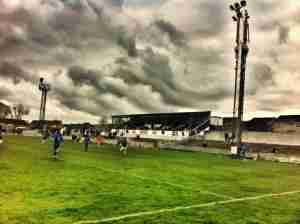 The last few days had been spent in the TBIR Northern HQ in Lincoln where we had taken in Darts (PDC Premier League in Nottingham), Rugby League (Doncaster and Wakefield) and finally Barnsley before we headed back down south before the Little Fullers started speaking funnily. A quick drop off at the dream factory and I was back across the Thames to Aveley. The car park wasn’t exactly overflowing and walking into the club house saw only a group of the usual Lewes away support, and few home fans. Aveley 0 Lewes 0 – The Mill Field – Saturday 7th April 2012 Football should not be a results-based business.  Remember I said that at the start of this tale?  Well when you are doing everything to score what would be a winning goal against an already-relegated team whilst all of the teams around you are losing then it is all about the result.  Enjoyment needs to take a back seat to a goal, any goal.  The fickle world of contradiction. 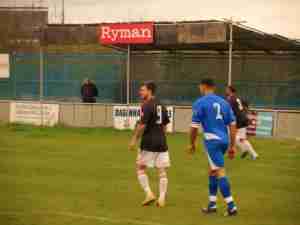 An hour after the game had ended all square and Aveley’s relegation had been confirmed, it was again a bitter taste of what could have been in the mouths of the Lewes fans.  Matt Ingram in the Rooks goal did not make one save in the ninety-odd minutes, whilst at the other end the Aveley keeper had a great game, stopping numerous chances when the Lewes players realised where the goal actually was.  But what if….A single goal would have taken Lewes above Hendon and Cray Wanderers into a play off spot.  And with a game against Cray next week, promotion could have been a step nearer reality. But somedays it is not meant to be.  The game kicked off with no more than one hundred fans in the ground, with nearly half of them following the Rooks.  On such a huge playing surface and with the wind blowing across from the Thames estuary any opportunity the Rooks had to play the ball to feet was limited.  Far too often the ball was lofted into the area, with Aveley’s keeper dominating his six yard box.

The second half saw Lewes getting closer and closer.  The Aveley keeper seemed to dislocate a finger yet he still managed to keep all borders away.  Draycott fired into the side netting, Booth almost headed home with a spectacular leap and Ben Billings should have earnt Lewes a penalty when he was clearly felled in the area but the referee, struggling with the size of the pitch, was so far behind play that he was still in the Lewes half when the challenge was made. Simon Wormull brought himself on as time ticked away and nearly broke the deadlock with a stinging strike near the end but at the final whistle it was the Rooks who seemed to be the relegated team as they bowed their heads, knowing that a massive chance to move into the play offs and have their fate in their own hands had slipped away. Football is supposed to be enjoyable, but on days like these it is really all about the scoreboard out there.
Share
Tweet
Share
Pins
Share
Like

Following an entertaining 2-2 draw at the Emirates a week ago, Arsenal and Chelsea locked horned again at Stamford Bridge in leg one of the Carabao Cup - with a very different o...