Share
Tweet
Share
Pins
Share
Like
According to history, the Ides of March (15th March) is considered to be an unlucky date. Many people think that Friday the 13th is the unlucky date but that came into play after the culling of the Templar Knights in the middle ages on the orders of the Vatican (apologies for the brief religious interlude). The Ides of March were a hallowed day in Roman history as it was the prime day of celebration for the worship of the god Mars. Just like today Mars was revered but not quite in the same way. Our worshipping of a chocolate bar is a bit different to their deference of the god of war but not far off if you have seen the scrum in Netto when they do a buy one get one free. It was also the day, back in 44 BC when Roman Emperor Julius Caesar was murdered by his back benchers for fiddling his expenses. As he uttered the words “Et Tu Brute” he created the immortal line about literally being stabbed in the back, made even more famous by Kenneth Williams in Carry on Cleo. 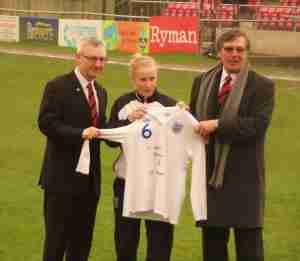 The Ides of March had raised their heads at Lewes this season already. Two excellent wins had put the Rooks back on track for a push for the playoffs, sandwiched by the news that the awe-inspiring, record-breaking Lewes Ladies had won the Womens South East Counties League without even playing. Their record so far thus season of just dropping 2 points is amazing and the club can now boast an England International with Naomi Cole.  The chance of the double came on the Ides of March – the Sussex Cup final versus Brighton & Hove Albion. Looking to defend their trophy, the Rookettes battled hard but fell agonizingly short. The Ides of March – stabbed in the back by those so close (I.e Brighton). There was still the matter of the League Cup to come as well as looking forward to next season when they would be taking their place in the Premier League against teams who could call on significantly more resources than the Rookettes. Oh, and there was the small matter of Naomi Cole’s recent England debut. Superstition? Who needs it? But there was another matter on the horizon. A monster of a two-week period would see Simon Wormull’s side take on the teams in 1st, 3rd and 5th in the league starting with the visitors of the Trawler Boys, Lowestoft Town. The Blues were tipped as promotion favourites at the start of the season alongside Lewes and in our meeting on the opening day they won the bragging rights by beating the Rooks 3-1. Despite an impressive home record with only one defeat, the long journeys to away games had taken a toll on their results where they had lost seven times. So there was hope that Lewes could pull off a result in the return fixture. 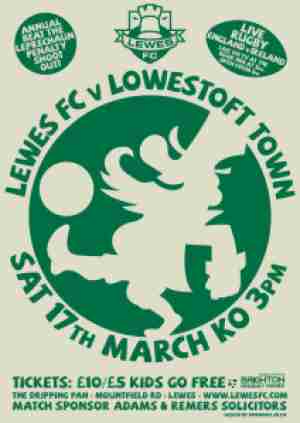 The match of course coincided with St Patricks Day – not quite the Ides of March but close enough. Of course Lewes were doing something to celebrate this hallowed day. The Annual Beat the Leprechaun Penalty Shoot Out. Of course it was. You can hardly accuse the club of being boring and simply doing a promotion on Guinness. In fact with the Lewes annual Beer Festival only finishing a few hours before, Guinness would be at the bottom of the agenda, with 20 guest ales making their debuts at The Pan. The afternoon started so well when we arrived at the ground to hear Anarchy in the UK blaring out of the PA system.  It looked as if Ed had been barred once again from the office.  But hope was short-lived as he had lured us into a false sense of acceptance by following up the Sex Pistols with The “bloody” Fall.  Stick to the complex financial modelling Ed and leave the music to us “young ‘uns”. One crisis averted it was time to sort the next one out.  Pie selling.  After the success of the RookPies last week we had doubled production and added a Lamb Hotpot to the menu.  But we had lost our pie sellers.  Fear not, I said, not wanting to see the bumper crowd disappointed.  I used my head and volunteered Lolly.  “I’m not wearing a hat…..or a bum bag” she said as she put in a good pre-teenage strop as she marched across to the portakabin.  I shed a tear – my baby girl’s first day at work – what more could a Dad ask for – selling pies at football. Lewes 2 Lowestoft Town 2 – The Dripping Pan – Saturday 17th March 2012 Even now, some three hours after the game ended I still cannot believe the result.  As the game entered the fourth (and final) minute of injury time I turned to Pan virgin Matt Lewis and said, tongue in cheek “Watch us concede one now”…Fifty six seconds later that is exactly what happened.  It wasn’t the first time this season we had dropped points in the last season but every time it leaves that gut-wrenching feeling in your stomach. BUT let’s not forget that we were playing one of the top teams in the league and for 94 minutes we had completely bossed the game.  This is Lewes mark II, the Wormull version.  Players playing with a smile on their faces, working for each other, showing high levels of fitness and above all creating chances. The game couldn’t have started any better for Lewes.  After just four minutes we were one nil up.  Crabb noticed some dithering in the Lowestoft defence and nipped in and poked the ball home.  Last week it was a third minute winner, today it was sixty seconds longer.  Golden goal ticket times – 71 and 79 minutes….Ten minutes later and Crabb had scored a second when he slotted home with ease after creating some space for himself in the area.  Lewes were rampant. The Lowestoft keeper, Andy Reynolds, was having a nightmare.  He looked shaky under pressure, so that is exactly what Lewes put him under.  He probably wasn’t helped by the “banter” from the Jungle and proved to be one of those keepers who decided not to join in (unlike the top chap from Carshalton last week). 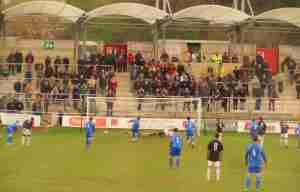 Lowestoft came back into the game with ten minutes left in the half when Kamara conceded a soft penalty.  He did what most defenders do when pressuring a forward, “leaning” into him but the referee deemed this was a penalty.  Two minutes later it seemed that another keeper error at the far end had resulted in a third Lewes goal, but the referee deemed that a Rooks player had touched the keeper and it was ruled out.Two-one Lewes at half time. Lolly had sold out her pie allocation (the top seller today was the fantastic Steak and Ale – the king of pies) and was in possession of a crisp £10.  I explained the economics of the situation to her.  For an hour’s work she had earnt more than she would in two week’s pocket money.  Children today – never had it so good. Ah yes – half time. The annual Leprechaun penalty shoot out.  Despite what Ian King from Two Hundred Percent may say (or report), I WAS NOT THE LEPRECHAUN!  The picture below proves that. 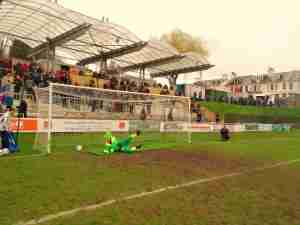 I was holding the “pot of gold” – the chocolate coins every one of the kids got for taking a penalty against the Leprechaun, aka Barry from the Club Shop who did a fine job between the posts. The second half was dominated by talk of the fantastic Eastbourne Star beer in the bar, Lord Plumpton’s fine looking moccasins shipped exclusively from Maine and the new website discovery Non League Chips.  On the pitch the battling Lewes team continued to harass, harry and hussle the visitors and it seemed they were always on the verge of a third.  But as the minutes ticked by nerves started to grow.  Ninety three minutes were up and Max Howell had the ball.  He jinked inside and looked to push the ball past the covering defender but he was muscled out of the way and pushed the defender to the ground.  93 minutes 43 seconds. The free kick was taken and pumped long into the Lewes area.  Robinson (outstanding all afternoon) appeared to leave the ball to Ingram (top notch) and in the confusion Lowestoft equalised.  Bugger. 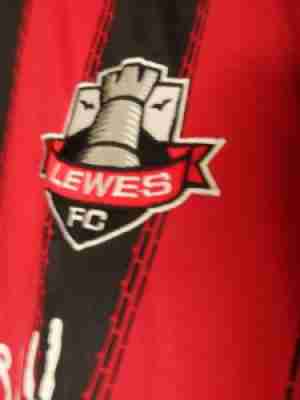 The final whistle brought disbelief.  Some fans booed the referee (apparently a fair number believed that Lowestoft’s number four had been booked twice), whilst others didn’t know what to do.  But here is the perspective.  We had just outplayed one of the top teams in the division and got a point.  As one of their fans said to me in the bar “You were robbed”.  We would have taken that point at 3.03pm.  This was a sign of our progress in the past month.  The play off dream was still alive. Other results weren’t exactly ideal but at least we knew one thing – a point on Wednesday versus Leatherhead would make relegation a mathematical impossibility.  Always look on the bright side of life, even when the Ides of March strike you down.
Share
Tweet
Share
Pins
Share
Like

This was supposed to be a happy report.  The sun was shining, in fact so much so that it was the hottest October day on record. Lewes were trying to extend their 100% home record and abov...