Share
Tweet
Share
Pins
Share
Like
We are not shy about extolling the virtues and pleasures about Non League football, and our merry band of writers are plucked from like minded people.  One such star is Andy Hudson, the editor ofganninaway and a champion of the Northern League.  Andy approached me a couple of weeks ago with an idea.  “Stu….what about I ask to travel to an away game on a team coach…will that make a good read?”  We, of course, said yes and below is the story of a day on the road with Hebburn Town.  Over to you Andy. The bus pulls into the Hebburn Sports and Social Ground to be met by the committee team of chairman Billy Laffy; secretary Tom Derrick; treasurer John Bolam, who is off to the Sunderland game later but helping to sort the kits out first; Paul Hill; and “kit man, press officer, floodlight operator and rubbish picker-upper” Alan Armstrong. There are no players in sight as the clock ticks past the scheduled departure time, only for John Toomey, Liam McBryde and Calum Charlton to hurry on board offering apologies for the delay: “I’ve had to work with me da this morning,” pants Charlton, “and I’ve had me tracksuit on since half six!” A large bag of Haribo mix emerges from Toomey’s pocket as McBryde, scorer of 35 goals in 33 appearances already this season talks about “how bloody lucky Newcastle were you to get a point against us last week”. With three quarters of the Sunderland based contingent on board, Lee Harrison is still at work and having to follow the team bus over once he finishes his post round, the bus heads off through the Tyne Tunnel for the next pick-up spot. A shout comes from the front of the bus telling the lads that “there’s nee solids allowed in the toilet; pissing only!” and we swing into a hotel car park where a few players clamber on board. We sit waiting for the Killingworth lads who are running late. The players on board wander off in search of a shop, returning ten minutes later to find Dean Nicholson complaining of having “had no sleep at all last night, man; I’m fuckin’ knackered,” while ‘keeper Dan Regan, who had finished his shift in one of the pubs popular with the Geordie Shore wannabes only a few short hours earlier, looks confused when he’s given a new polo shirt in XXL size: “Are you sure this is mine? It’s massive, man,” he asks, receiving the reply: “Aye, well I think so. Bolam just told me to give it to Dan…does he mean Kirkup?” 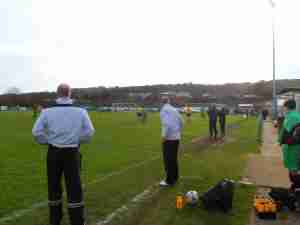 “I’m 37-years-old and I’ve been sitting at a bus stop for over half-an-hour,” manager Paul Bennett jokes as he falls back in a seat when we eventually arrive for him. “Benno, have ye seen this picture of Calum when he was five?””Hey, it’s Harry Potter there!” Having dragged ironing boards to Alnwick Town and plants to Gateshead, today every player has to have a childhood photo with them to avoid a £5 fine towards the players’ pool. The final players are picked-up, including ex-Premier League star Jamie McClen – who acts as mentor towards the younger players in his final season playing football, and has none of the pretensions that you may think would go with a player who made first team appearances for Newcastle United under both Ruud Gullit and Sir Bobby Robson – and ex-professionals Jeff Forsyth, who was once signed to a contract a year early by West Bromwich Albion to ward off reported interest from Arsenal, and ex-Carlisle United player Dan Kirkup, who is waiting outside his local Co-op store in Haydon Bridge and is greeted with the shout of: “How Kirky, are you a local celebrity?” when he takes his seat. The 100 mile trip to the west coast is passed with shouted out questions like: “Who reckons van Persie will still be at Arsenal next season?” and trying to solve conundrums such as how sheep don’t fall over when they are standing on steep hills. Ahead of schedule, despite the delays, the bus empties outside of a Carlisle supermarket, with cigarettes quickly smoked and players disappearing to buy bottles of Lucozade and to make sure Walker’s can afford Gary Lineker’s next fee for making more adverts. “Can we stop off at a bookies when we get there?” drifts a voice down the bus. “Aye, we’re gonna walk to the ground from the centre, man.” The walking plan is soon scratched when no-one has any real idea where the ground is from where the bus stops, just around the corner of a Weatherspoon’s pub. Everyone apart from the players, management and Tom Derrick, who has spent the last 20 minutes asking Benno if he has his team sorted – “Nar, not yet; I’ve been bouncing it around but I haven’t written it down yet” – jump off and head in search of alcohol. Whitehaven 2 Hebburn Town 3 – Saturday 10th March 2012 Match report for the Shields Gazette: The Hebburn Town manager, Paul Bennett, had talked before the match of “four hugely important away games coming up” that will shape the season for his side; after a hard fought victory in Cumbria that moved the Hornets up to fifth place in the Northern League Division Two, and within only three points of the promotion places, Bennett was a “relieved” man. 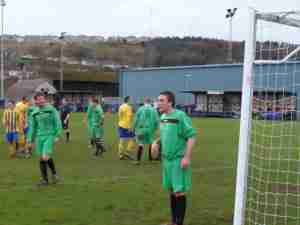 Lee Harrison, left, and Paul Gardiner, right, pose for a photo while defending a corner

The game plan was to snatch a goal and then shut up shop, and in a first half that they dominated, Hebburn should have been out of sight of the home side by the half-time whistle. Setting out in a 4-5-1 formation, Hebburn fashioned a number of chances and took the lead after only eleven minutes. A right-wing Jamie McClen corner was met by the onrushing Dan Kirkup who thundered a header towards goal. As the ball looped up in the air after being blocked on the line, it was Tony Stephenson who reacted first in the packed goalmouth to nod the ball over the line. With Whitehaven looking dangerous on the counter attack, the centre-half pairing of Dan Kirkup and Jeff Forsyth were comfortable dealing with any imminent threats to Dan Regan’s goal. On the stroke of half-time, a long ball forward by left-back Lee Harrison was brought down by Liam McBryde – playing a solo role up-top with Alex Benjamin benched for the game – who saw his attempts to turn towards goal hindered by a great deal of shirt pulling. The referee had no hesitation in pointing to the spot and McBryde confidently placed the ball on the spot. Hitting the ball to his right, the Hebburn hitman then watched as Stewart Pettit flung himself towards the ball to pull off a fine penalty save. Starting the second half having to weather some Whitehaven pressure, Hebburn conceded an equaliser through their own making after 57 minutes. A left wing corner should have been dealt with comfortably by Regan, but under pressure at the back post he dropped the ball and Leigh Dunn stabbed home to level the game. 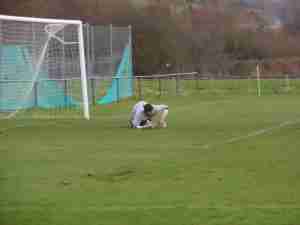 Dan Regan gets down to make a simple save

It took 60 seconds for Hebburn to reclaim their lead. McBryde broke free on the right side and made amends for his penalty miss by sending a cross-cum-shot looping over the head of Pettit with the ball dropping into the corner. The lead was extended on 67 minutes when Harrison hit sweetly struck free-kick that the ‘keeper could only parry back out. The first player to react inside the danger zone was Paul Gardiner and the centre midfielder stroked the ball in to make the score 3-1. There were still nervy moments for the visitors to endure, especially after 72 minutes when the home side reduced the lead to 3-2 when a Jonathan Donat shot deflected off Forsyth to beat Regan, yet the central defensive pairing held firm to see the game out with the three points deservedly heading to South Tyneside. Next up for Hebburn is a tricky trip to fellow promotion contenders Esh Winning on Wednesday night. With eleven games left of the season, the promotion dream is still very much alive. The return of the magnificent Hebburn…. Celebrating with sausage, chips and lager, the Hebburn lads get as much down their throats as possible before the driver calls everyone back on the bus for the journey back east. What had been eastern promises – pub stops along the A69 – turns into a supermarket stop to get some beers; the driver wanting to get home and clock-off his shift as soon as he can, and ahead of going over his maximum driving time for the day. 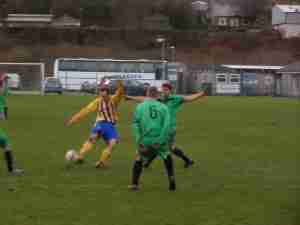 Asda is deserted until the crowd suddenly cascades down the aisle, sweeping up cans and causing panic at the tills with the sudden ‘Boxing Day Sales’ queue. “That was a massive game for us” Lee Harrison tells me, “they came to our place and beat us five nil earlier in the season”. Harrison draws on his cigarette and ponders for a moment. “We’ve still got some massive games coming up,” he continues, with a huge grin on his face and clearly savouring his starring return to the side after missing so many games through injury this season. Back on the bus we pass through small towns and villages; Carlisle is left behind us and the singing has been loud: “Eee aye eee aye eee aye ohh….up the Northern League we go,” before silence falls and McClen, wine glass in hand, gives his ratings out of ten; with each player taking their turn to stand and receive his assessment which fuses humour, genuine feedback and praise. Some of the players are dropped off during the journey back; most return to the Hebburn Town clubhouse to continue with the merriments, a sign of the strong bond formed between them all. Another of the ex-West Brom lads, midfielder Dean Nicholson, now recovered from his sleepless night, has stepped seamlessly into the role of assistant manager, covering Andrew Wood who has taken a few weeks off, is all smiles, despite an injured back keeping him off the wing and instead leaving him patrolling the technical area: “I’m loving it! I love these lads. D’ya want another Guinness, Andy?” I leave as the celebrations continue, with a match report to write early the next morning. I turn the corner onto Victoria Road and can still hear laughter and singing drifting over the football pitch. If promotion is achieved this season then I reckon that noise is one that you could hear for a few miles beyond South Tyneside.
Share
Tweet
Share
Pins
Share
Like

“Jealousy is nothing more than a fear of abandonment” For a number of reasons I found myself standing in the bar at the War Memorial Sports Ground in SM5 at 7.35pm i...