Share
Tweet
Share
Pins
Share
Like
“Can’t read my, can’t read my, he can’t read my poker face”.  So sang Stefani Joanne Angelina Germanotta, aka Lady Gaga in her 2008 hit single Poker Face.  But what actually is a Poker Face?  Body language expert Paul Ekman defined in his research the concept of a “micro-expression” back in 1990.  This was the split second (as quick as 1/100th of a second) change in facial features when someone is under pressure or stress.  Ekman’s research involved watching hours of facial expressions in a number of situations, specifically in  poker where players reaction to their dealt hands in the blink of an eye was often enough to give away their intentions. Footballers tend to play more poker than your average Joe.  Few are know to pick up a book and read on long away trips and whilst technology has meant that music and video is now more readily accessible and portable, old fashion card schools are still the order of the day on many coaches travelling up and down the country every weekend.  Many players have become experts in games including Poker such as Teddy Sheringham and coincidently his old Millwall striking partner, Tony Cascarino. It isn’t just footballer who get involved in a high stakes game or two.  Brighton & Hove Albion owner, and the man behind the dream of the Amex Stadium, Tony Bloom is a world-renown Poker player.  Known as The Lizard, he has won significant sums in high profile events, including finishing runner up in the Poker Million XI event in December 2010. 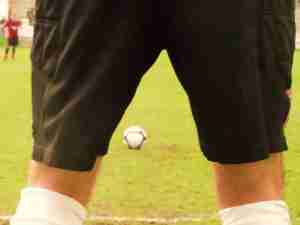 As of yet few academics have really researched the presence of a micro-expression in football.  On average a penalty is awarded every 4.5 games in the Premier League, and the success rate is 70%.  However, the actual number that are saved is still relatively low.  PenaltyHQ.com have studied over 1,000 spot kicks from all of Europe’s top leagues in the past five seasons.  Some keepers are better known for their penalty saving than others.  During the 1990 World Cup semi-final penalty shoot out, England’s ageing keeper, Peter Shilton got nowhere near any of the German spot kicks and has a pretty poor career record of saving them.  Compare that to West Ham’s Robert Green who has saved ten penalties in the past four seasons at West Ham with a success rate of over 60%.  Green has never revealed his technique, but as one of the more cerebral players in the game today, I would imagine he researches the potential penalty takers in advance, looking for tell-tale signs, the “poker face” changes that give a clue as to their intentions. Blink and you will miss it.  That is the story that is shared between poker and football. With such high stakes, any slight advantage is key with both, and it seems now that the battlefield has moved into the brain rather than the brawl.
Share
Tweet
Share
Pins
Share
Like

Twenty one days of pain and frustration

Twenty one days ago the sun was shining. There wasn’t a cloud in the sky as Lewes kicked off against Canvey Island. Twenty four hours later I landed in Los Angeles to temperatures that wo...