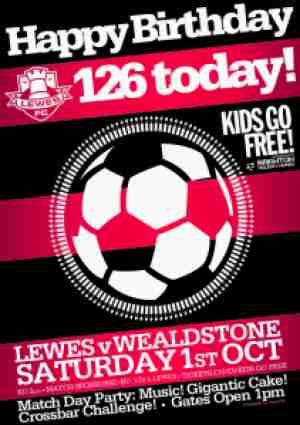 This was supposed to be a happy report.  The sun was shining, in fact so much so that it was the hottest October day on record. Lewes were trying to extend their 100% home record and above all it was the club’s 126th Birthday, and to celebrate they had planned a number of events at The Dripping Pan.  But it’s not really.  Because the actions of a small minority of away fans spoilt afternoon for the rest.  To put this in context – the club had to call the police in case things got out of hand, and the club were forced to lock the doors of the bar.  Why?  Well if you believe certain individuals from Wealdstone, “Because Lewes FC kept the bar open”…unbelievable and funny if it wasn’t true. One of the reasons why I have virtually turned my back on Premier League/Championship (don’t rub it in please) football was to get away from the type of supporters that we saw towards the end of the Ryman Premier League game this afternoon.  I have no idea what caused the small number of Wealdstone fans to react as they did, but whatever it was did it deserve the reaction we saw?  Sure the referee may have been wrong to award Lewes the penalty, and I have no idea why he sent off the Wealdstone player, but we all have days like this and 99% of fans never react in a way that causes a problem. It had all started so differently. The temperatures on the way down to the south coast touched 30 degrees on the car temperature gauge.  Sitting in a traffic jam along with thousands of other cars heading for the coast I listened to the feedback on referee Martin Atkinson’s performance in the Merseyside derby. Almost 40,000 fans were up in arms about his actions in the game….Still such hysteria wouldn’t have a home in Non League football, would it? Every team has famous (or notable) former players.  Unfortunately in today’s game so few top players ever started in the Non Leagues.  The huge amounts of revenue floating around the game means it is “better value” to buy or import foreign players than give a young non league player a chance.    In fact, look around the non league squads today and see how many of the players started off with Premier/Football League teams and released before they even got a sniff of a place on the bench. There are few teams in the non leagues who can claim as many famous former players as Wealdstone FC, visitors today at The Dripping Pan.  If only they could create a time machine and have one or two of them in their team today I doubt they would be playing still in the Ryman Premier League.  How about for starters a leader at the back like Stuart Pearce, who played for the club for five seasons whilst working as a plumber back in the glory days of the Alliance Premier League?  Or Vinny Jones, who passed Pearce as he was on his way to Coventry City.  Fulham fans will obviously know Johnny Haynes who played nearly 600 games for the Cottagers who ended his career at the club.  And finally, a current star – Jermaine Beckford, now at Leicester City who scored an impressive 54 goals in 80-odd games for The Stones. 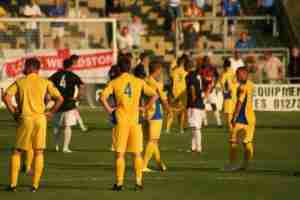 In the years BC (Before Conference), Wealdstone were one of the most feared non league teams in the land.  After they rose through the Middlesex and Southern Leagues they reached the hallowed land of the Alliance Premier League. In 1984/85 they claimed the first ever Non League double, beating Boston United at Wembley to win the FA Trophy and then capturing the Gola League (the Alliance Premier League), narrowly pipping Nuneaton Borough, Dartford and Bath City to the title.  At the time there wasn’t direct promotion to the Football League, but instead a closed shop vote by the 92 league clubs.  Since the creation of the top tier of Non League football Altrincham, Runcorn, Enfield and Maidstone United had tried but failed to gain election.  And that list would be joined by Wealdstone. But before they could apply it was deemed their ground was not up to scratch so another dream fell by the wayside. Today they are firmly at home in the Ryman Premier League, one of the best supported teams in the division.  They can even boast an international player, with midfielder Alex Dyer having played for Montserrat against Belize in June 2011. After the defeat on Monday night to Kingstonian, The Rooks only had their 100% home record to hang their hat on.  In fact after the games in midweek they were the only side in the division with this record and so the odds were on another win in front of the loyal Lewes Lunatic Fringe. Lewes 1 Wealdstone 0 – The Dripping Pan – Saturday 1st October 2011 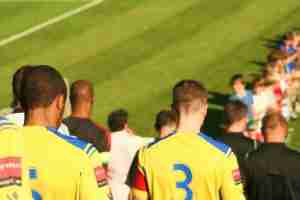 At the final whistle you would have thought the 740-odd fans would have been celebrating the extension of the 100% home record in the beautiful sunshine.  But no, most fans were starring in disbelief that a small number of Wealdstone fans were making their way around the ground to try to confront the referee as he walked up the steps to the dressing room.  Fortunately a gate separated them although they still had the opportunity to get their abusive points across.  So inflammatory was the situation that the away team’s manager came down to try to calm the fans.  It didn’t work and took the sound of police sirens to disperse them, although one of the “mob” appeared to be arrested outside the ground. I was surprised to hear little shock in the reaction from some of the people I know around the non league game that it had happened in this game.  I also witnessed a number of their club officials move from the bench to behind the goal to try to calm matters down in the second half.  But to suggest that the whole issue is down to Lewes FC serving alcohol during the game is like suggesting that the reason why someone is really fat is because McDonalds serve burgers or the reason why you are depressed is because you have spent your evening watching Michael McIntyre. All of these events really put the game in the shade.  It is hard to say whether the events on the pitch really fueled those incidents off it, but the referee, Mr Neil, was certainly centre of attention for the most part, perhaps inspired by that performance from Martin Atkinson in the Merseyside derby earlier on. The first big call came in the 17th minute when he deemed that Ciardini was brought down in the area.  Harsh on the defender for certain, but who are we to argue.  With normal penalty taker Paul Booth out injured, Nanetti fancied the kick and demanded the ball, but Ciardini was having none of it and he picked himself up, dusted himself down and after the obligatory yellow card for dissent was issued, his trusty left foot made it 1-0. 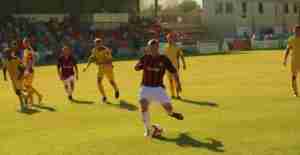 Wealdstone continued to press and had the better of the exchanges in the remainder of the half, with keeper Liam Mitchell sending out a message to his employers, Notts County, that he is ready for a shot at league football. Half time saw some cross bar challenge action on the pitch with a number of winners, including manager Steve King’s son, although his prize of a few pint of Harvey’s was soon “looked after” by Mr Marber.  We were also being graced by Sarah Flotel again, who brought her son and soon he was attired in a smart new Lewes shirt as well as the head of our Finnish Supporters club, Ville, who had sandwiched a trip to the Pan between two games at White Hart Lane. The second half saw the players suffer in the ridiculous heat, with Nanetti and debut boy Max Noble proving the difference between the sides.  Wealdstone looked the stronger of the two, and with Steve King having limited options available on the bench (only 3 subs named).  However, with eight minutes to go the Rooks appeared to get another rub of the green.  Peter Dean went up for a challenge with keeper Mitchell.  Both players were travelling in the air and with Mitchell reaching for the ball, Dean hit him (fairly in my opinion) in the midrift.  Mitchell fell to the floor, the referee pulled out the red card and he was off.  The fans behind the goal seemed to think that Mitchell was the guilty party here, getting Dean sent off.

Three minutes later referee Neil was at the centre of attention again, judging Sterling had pushed a Wealdstone player in the area, although it was as soft as the one in the first half.  Fortunately Mitchell saved the day, pushing out Richard Jolly’s spot kick much to the annoyance of the Wealdstone fans behind the goal and he became public enemy number one. After five minutes of injury time, the final whistle was greeted with ugly scenes and a need for the management to call the Police and lock the bar as a precaution.  The Wealdstone manager, legendary Gordon Bartlett tried to reason with them but to little avail. 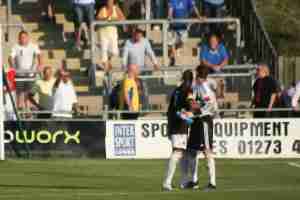 There is little more to say about the game apart from this. The celebratory mood had disappeared and the cake was left uneaten.  I am sure the story will roll on for a few more days but for now we headed home, sad that a day could have been spoilt in such a way. More pictures from an eventful afternoon can be found here.
Share
Tweet
Share
Pins
Share
Like

Former Manchester United defender Nemanja Vidic has revealed his admiration for Zlatan Ibrahimovic and has urged supporters to give Jose Mourinho more time to build a trophy-win...