Share
Tweet
Share
Pins
Share
Like
Monday night is not my favourite day for football.  Whilst I am an “addict” I would normally give Monday games a miss.  For some reason a number of Ryman League teams prefer playing their midweek games Le Lundi.  Aveley and Wealdstone have experimented, trying to avoid potential Champions League, Premier League and Football League games in the area. 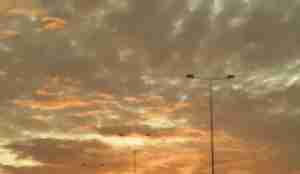 But tonight, Matthew, I was heading to Kingstonian around the M25 and its spectacular sunset where the Rooks were hoping to extend their unbeaten league run since the opening day defeat to Lowestoft.  They have favoured am Montag for a number of seasons, and attendance figures suggests that the get more people through the doors in the week than on a Saturday. Just five days ago this game was in doubt.  Someone had broken into the ground last week and put one of the sprinklers on.  Some hours later the water had caused a three foot hole in the pitch.  The groundsmen worked tirelessly to fix the problem, and the test was the win on Saturday versus Hendon which was passed with flying colours. For most travelling fans it is a pain in the arse, having to get into London from the South Coast, but for me it was an easy 25 minute journey to Norbiton, home of the K’s.  Well, sort of.  You see that they no longer own their ground.  Back in 2003 before Cash Converters and Wonga.com existed, the club needed a “payday loan” so approached tenants AFC Wimbledon as to whether they would accept the trophy cabinet as collateral.  They weren’t keen on that, but instead suggested the leasehold on Kingsmeadow, their ground of nearly fifteen years.  Since then the Dons have gone on to greater things, whilst the K’s have drifted down the leagues. Long gone are the glory days of the Conference Premier, or the back to back FA Trophy wins of 1999 and 2000 under the genius of Geoff Chapple.  Two seasons ago they almost made a return to the Blue Square South when they were favourites to beat Borehamwood in the Ryman Premier Play off final.  In a very stormy game, which saw a home fan enter the field of play and try to strike a Kingstonian player they were understandably upset by the incident.  The precedent would have surely been to replay the game at the very least.  But we are dealing with the Isthmian League here, where reason is suspended so after a long delay they announced the result would stand and Kingstonian would stay in the Ryman League. This was to be my first visit to see Kingstonian since 1995.  I was actually one of the sell out crowd that saw Ruud Gullit’s Chelsea debut in a friendly at Kingsmeadow.  I think the score was 8-0 in the end but my view of the game was basically a small strip of the penalty area between someone’s silly hat and another bloke’s large ears. You don’t get to stand between the Queen and Prince Charles every day I can tell you. Midweek Lewes games in London means a cast of thousands normally.  So who would be joining us on the terraces tonight?  Well, first up the draw of Lewes is now European wide and we were welcoming Polish Scout. Most clubs have at least one celebrity fan, and the K’s man is none other than Jamie Cutteridge, a man who adds value to every occasion.  And of course new Lewes owner Legside Lizzy was there, checking on her investment in the club along with her football mad (and TBIR’s newest/youngest fan) son plus of course our latest “celebrity” fan, Sarah Flotel. Kingstonian 1 Lewes 0 – Kingsmeadow – Monday 26th September 2011 Told you I didn’t like Monday night football, and neither did the Lewes team as they seemed to still be on weekend time.  As we stood behind the goal(s) as the impressive Kingsmeadow stadium we got the feeling that we were at Twickenham as the number of balls that kept sailing over our heads and into the car parks behind the goal. 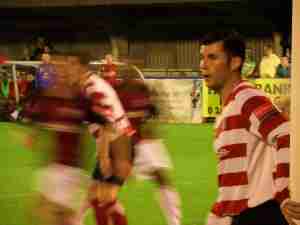 Let’s make no bones about this – Lewes were poor.  I actually think they were poorer than in the 4-1 defeat in the FA Cup last week to Chertsey.  At least on that occasion they created a chance or two.  Tonight there was nothing, despite King starting with three up front with Draycott coming in to replace Booth (perhaps to try and limit the amount the club pays out as Booth is on a goal bonus?).  Ciardini started on the bench due to his hamstring injury and in truth The Rooks only looked lively when he came on near the end. The set up at Kingsmeadow is impressive, and the burger van, genuinely named “Burgers and Fries” looked tempting.  Alas it wasn’t with customers coming away disappointed with the quality.  It didn’t stop one local going up to the counter and asking if they “did burgers?”…there was no irony in his delivery either.  So an impressive exterior led to a disappointing experience which was the complete opposite to the Kingstonian programme.  What a work of art.  It is simply full of stats, such as:- And how about this – instead of team line ups, they called it Dramatis Personae..absolute class. To be honest that was the high point of the game.  Well, there were two other incidents actually.  Firstly, in the bar before the game I managed to stump Cynical Dave for only the second time with a question.  Faced with a match programme from Manchester City versus Middlesbrough from 1979 he failed to correctly chose the one sole player from the twenty two listed who went on to become a manager (it was Paul Futcher who managed Darlington and Southport).  Such moments are like gold. 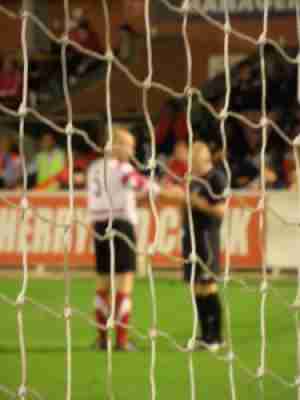 And then we had the strange case of Tom Hutchinson.  Tom was signed by Tim O’Shea, then manager of Lewes, at the back end of last season from Kingstonian. “He will do you no good” said Mr Cutteridge, but Tom was a bit of a rock at the back and our mini upturn in form coincided with his spell at the club.  Now back at Kingsmeadow he was immense until the 75th minute when he was booked for dissent after questioning a handball decision that wasn’t given.  The game restarted and he barely had time to walk 3 paces before he hacked down Nanetti and the referee pulled out a second yellow, 33 seconds after the first.  And as he was by the touchline his walk down the tunnel would have been missed by those sneezing or generally looking in the wrong direction. Not that it helped the Lewes cause at all as they huffed and puffed but failed to blow the defensive wall down.  Time can never mend, as George Michael once said, and that was so true tonight.  We hate Monday night football, we didn’t want to play anyway so there!
Share
Tweet
Share
Pins
Share
Like