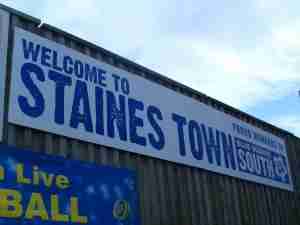 Staines. Probably most famous for being the setting to the Ali G movie, however to the council this is more hindrance rather than help. So much so, they changed the name to Staines-Upon-Thames. However to most people it is, ‘the staines massive’, home to Staines Town FC, Blue Square Bet South. Evidence of the football club not being bothered by tagline can be seen on their website, www.stainesmassive.info Staines have been in the Conference South for the past two seasons, finishing a superb 8th in their first season and 15th last season. Hopes are high amongst management that this could be a good season, they have kept the nucleus of the squad from last season and added a few additions, most notably Dave Wheeler from Lewes (ED – OUR Dave Wheeler), helped by the fact he’s studying at Brunel university and relocating to the area. They have lost their most promising player in Mario Quiassaca, who had his contract terminated immediately after being named and shamed as taking part in the recent riots in London. When I flew the nest of Gillingham and moved to ‘the massive’ five months ago, I found myself living in a house a stones throw from Wheatsheaf Park, a nice perk when needing my fix of non-league football. This was first weekend I have had since starting a new job, so was fully intent on watching any football, so off I trundled down to the ‘Beehive’ pub for Saturdays lunch time kick off of Arsenal v Liverpool. Having been suitably bored, I looked up who Staines were playing and low and behold they were at home to Salisbury City. Better yet still, entry was FREE. However this free entry was tinged with the sadness that their long-serving Chairman Alan Boon had passed away and his family’s gesture was to allow free entry to everyone to this game. I could not turn this opportunity down of watching what my local team is now for free.

I stepped in Wheatsheaf Park expecting a few hundred in the ground due to the inclement weather, however to my surprise the ground was abuzz with many young kids getting their 1st taste of live football, seasoned ‘Swans’ fans, families and the expected crazy old guy who has supported them since year dot. The ground itself is very nice indeed, 300 covered seats, 800 covered terrace and plenty of space to stand behind the goal and sidelines, it could easily hold 3000. In fact their biggest crowd was set in 2007 against Stockport County in the 1st round of FA Cup, standing at 2862. Their average attendance last season was around 2-300 people, in fact their commercial manager recently made this plea to stay away fans: ‘We have one of the best grounds in the league, where families can come and enjoy a game of football without subjecting their kids to bad language or behavior that often occurs at a higher level.’ Having seen the game, I can tell you there was its fair share of fruity language. STAINES TOWN 0 SALISBURY CITY 1 – WHEATSHEAF PARK – SATURDAY 20TH AUGUST 2011 I walked through the turnstiles and soon found the programme seller. £3 for the match day programme, but this wasn’t just any programme. Oh no, this was the winner of Blue Square South programme of year 2011 and you can see why. Stacked full of content, from previous game reviews to a big interview with their new signing David Wheeler. The teams were lined up on pitch as the stadium announcer introduced the Boon family to crowd with a touching speech about his life and then followed by one minutes of applause. The pitch itself was in superb condition and with the earlier rain, looked like a footballers dream pitch. 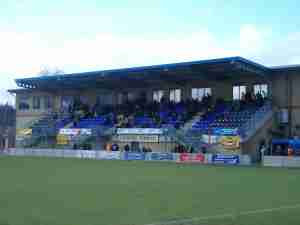 Having been soaked from the walk from the pub, I found a seat in the covered stand. As soon as I sat down, the sun came out. I sat there with my notepad and pen (pretending to look important) and started taking down names and numbers from the programme only to find out all the numbers for the Salisbury players and names in fact were incorrect. I did get hold of a team sheet to correct myself so alls well. Anyway, on with the game. Salisbury started with a 4-5-1 formation with a big Jake Reid up top and Matthew Wright playing just behind. Staines went with a standard 4-4-2 formation. The opening stages very scrappy and the only bit of action, barring a man falling up the stairs, was a good save by the Staines number 1 Louis Wells saving from a terrible defensive header almost nestling in the top corner. The first corner kick came on 15 minutes, the ball spending more time off the pitch than on it. In the 41st minute we were treated to the first shot by either team, coming from Callum Hart (ex-Bournemouth), a daisy cutter from 25 yards comfortable for the keeper. And that was first half. Sounds exciting hey? At half time, I made my way to the burger bar for the obligatory burger and Bovril. I’m delighted to say the burger was huge and handsome. The Bovril in case you’re wondering was standard. The Salisbury players came out 5 minutes early and took part in some drills. The same drills teams do before a game, an odd thing to see I thought but it turned out to be a masterstroke by their manager Darrell Clarke. Salisbury came out all guns blazing, passing the ball around and stretching the game from side to side and the on the 51st minute the breakthrough came. In fortuitous conditions I have to say, the ball passed back to the swans goalie, his clearance charged down by Matthew Wright and rebounding into the top corner. Salisbury 1-0 up and fully deserved. Almost immediately from the restart Staines almost equalized through Warren Harris, drawing a good save from Conor Gough following a sweeping move. Little more football action followed, however a boxing match did break out. Andre Scarlett throwing at least 2 punches towards a Salisbury player after handbags. It was not spotted by any of officials and he was only booked for his part in instigating said incident. As the game edged towards the final 10minutes, Staines almost scored through a close range header from their outstanding performer and captain Danny Gordon. Only a cracking save from Gough keeping it out. This was to be the last footballing action of the game; however the boxing match was not over. Staines’ Gareth Risbridger thinking it was fine to hand off a player. The ref spotted this one and duly sent him off to a crowd not applauding him, but calling him names due to his petulance. I put it down to a case of frustration as he had been run ragged all game and was by far the worst performer on the pitch. And that, was that. Staines failing to give the 1,002 strong crowd a win. The club will be hoping some of them fans will start coming on a regular basis, at £8 normal entry for adults, I will return. Oh and congratulations to Staines Simon Jackson on winning sponsors man of match. His prize… a bottle of Asti with a bit of paper stuck over label saying ‘man of the match’. He’ll enjoy that I’m sure. James Drobka ( on Twitter)
Share
Tweet
Share
Pins
Share
Like

Arsenal and Paris Saint-Germain to battle for Marouane Fellaini

Marouane Fellaini's time at Manchester United seems to be running out as the bushy-haired midfielder is yet to sign a new contract. Some reports claim the Belgian is unhappy with&nbs...