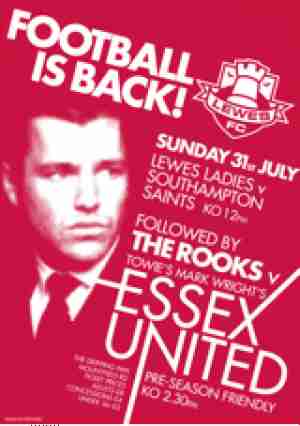 I kid you not there is now a team called Essex United.  They are the side put together by ex-Grays Athletic and Lewes footballer Mark Wright. Wright is of course better known from the ITV series “The Only Way is Essex”.  The team have embarked on a series of pre-season games this year, trying to boost their “popularity” as well as giving local women an opportunity to practice their “cougar” skills.  In fact they are due to play next this Sunday at The Dripping Pan against Lewes. Last weekend they took on the once mighty Grays Athletic, now in the Ryman League North after their chaotic resignation from the league/re-instatement/demotion/promotion from last summer.  They lost 4-0 which isn’t too much of a surprise considering the difference in skill between the two sides. Grays are going through another “re-birth”.  Last season with Julian Dicks at the helm, supported by ex-West Ham players John Moncur and Kenny Brown, the club flirted with the play offs for a while but had to look on enviously as landlords East Thurrock United waltzed away with the title. It is strange to think our last visit to watch the club had been on a sunny day almost two years to the day at their old Recreation Ground in the centre of Grays when they narrowly lost to West Ham United.

Two years later and the ground is a building site, the team who were looking forward to a season playing against the likes of Cambridge United, Stevenage Borough and Oxford United are now preparing to face Soham Town Rangers, Leiston and Thamesmead Town. But there is still the pride of Essex to fight for.  Last season that was taken quite literally in the remarkable games against bitter rivals Tilbury, where over a hundred “fans” were involved in a fight after the game at Chadfields. This season there will be league games against Romford, Ilford and Brentwood as well as “the Dockers” but first up was another all Essex affair against AFC Hornchurch. The visitors knew all about spectacular falls from grace themselves.  Touted as the “money bags” of the non league back in the mid 2000’s, the club were able to sign high profile players such as Ex-Chelsea keeper Dimitri Kharin thanks to some significant investment from their then owners.  Unfortunately, when the money ran out the players up and left, quite a few of them to fellow Conference South rivals Grays Athletic creating a little bit of hostility that exists today in the bars and clubs of Epping Forest. 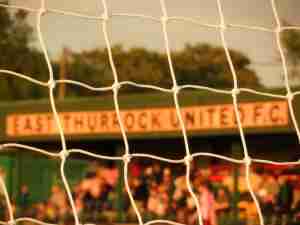 This was my first trip to the village of Corringham, home of East Thurrock United’s Rookery Hill.  And pulling up outside of The Bull just across the road from the ground I was pleasantly surprised.  It was almost rural.  If you could ignore the huge oil refineries in the distance this could be your quintessential English village scene.  I walked through the small churchyard and into the ground just as the two teams emerged. Grays Athletic 0 AFC Hornchurch 1 – Rookery Hill – Wednesday 27th July 2011 After 20 months in charge, Grays and Julian Dicks went their separate ways back in May.  Dicks felt he could and should be managing at a higher level, and as recently as last weekend he confessed so to the Non League Paper, expressing his disappointment that former team mates such as Paolo Di Canio with no previous managerial experience at all had been given the chance at Swindon Town.  The new Grays era is being managed by ex-Thurrock manager Hakan Hayrettin and judging by their attacking start, with ex-Lewes striker Jean-Michel Sigere causing a threat they will be one to watch this season. 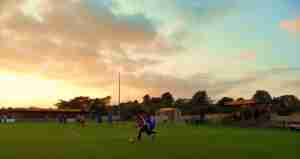 With the sun setting low over the ground and both teams forgetting that this was a “friendly”, the match made for a very interesting spectacle.  There didn’t seem to be much between the sides with the ball being played through the midfield and out wide as and when a crunching tackle didn’t stop play.  Chances on goal on the other hand were few and far between. Grays had the better of the earlier exchanges but it was Hornchurch who broke the deadlock just before the half hour mark. It followed a Jon Hunt corner which was played short to Tommy Black.  The ball came in but was cleared although only to the covering midfielder.  When the ball found its way back into the area Lewis Smith had space and seemed to miss touch it to Curley to buried the ball from ten yards.

Half time saw the usual raft of substitutes and with the daylight fading neither team could really take a hold on the game. With the ground bathed in the last bit of sunshine (yes, in this great British Summer I have at last been able to use that world) I took stock of the surroundings.  Rookery Hill is an odd ground.  Behind one goal are two of the smallest piece of covered terracing I have ever seen. Stands that I would have made in five minutes in my Lego world (see my article for In Bed With Maradona on the subject). One side of the ground has a strange double decker portakabin situation going on, and the dressing rooms were in what could be described by my generation in a “Scout Hut”.  But it is a welcome home to Grays, who would have been in a whole world of trouble if East Thurrock wouldn’t have thrown open their doors to help them last season. Despite a few good saves from Grays keeper Northwood there was much more action in the second period.  AFC Hornchurch can be pleased with a win over a local rival, and Grays can be pleased with the performance they put in.  After all pre-season is “all about the performance” right?  Or am I confused again. More pictures from the not so friendly friendly can be found here.
Share
Tweet
Share
Pins
Share
Like

STAND UP IF YOU LOVE DICKS! – Hayes & Yeading FC

As you will know if you are a regular follower of the blog, we have a soft spot at TBIR Towers for Grays Athletic.  This is due to a number of reasons.  I once trained for a full three we...