How was it for you? Part 9 – Fancy Dan and the drumming gorilla 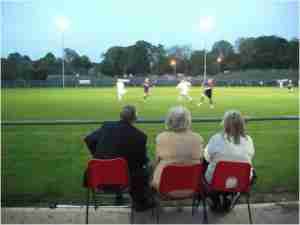 To close off our ten day jaunt down memory lane of the Non-League passed I needed a heavyweight, someone who could knock people out with a dramatic punch.  Instead Beat The First Man sent me something.  With no other options left, here is his take on his season in the style of Timothy Lumsden from Sorry. “Write a report of your season” said he. “I will” said I I didn’t. Then he mentioned it again two weeks later, and I couldn’t get out of it. So this is how I spent my Bank Holiday weekend. I hope you appreciate the sacrifice. Standard season reviews are easy. “We had hopes, they were dashed. Coggins was good, Miggins was awful. Next season, with two or three new players …” But what do you write when you don’t have a team? No-one wants to sit through ream after ream of poorly-constructed match reports from the Abacus Lighting Central Midlands Football League Black Dragon Premier Division. And I don’t want to write them. Christ knows I struggle in the immediate aftermath, never mind several months later. So instead, there now follows a slide-show of some of my favourite snaps from season 2010 – 2011, accompanied by some half-arsed descriptions. If I’m honest, you will probably enjoy You’re Supposed To Be At Home’s effort more. 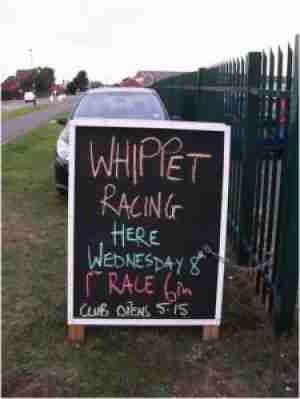 Outside Shirebrook of the NCEL, who were momentarily managed by the wonderfully monickered Rudy Funk. Unfortunately I arrived too late for the whippet racing, but there were definitely more cars for the whippets than there were for the football. The excitement got just too much for some as Gresley closed in on the EMCL title at Radcliffe Olympic. Jesus, but this is boring, no? It’s like all the worst 1970s sitcoms and I’m not even wearing an chiffon dress. No-one deserves this sort of suffering. How about I tell you about non-league football in Derbyshire, Nottinghamshire and South Yorkshire? That’s guaranteed to be enthralling. Well, in a word, it’s shit. A look at the top echelons of football tell you that all of Sheffield is crap at football. Forest, Derby and Leicester have tried to be any good, and failed. Around them, folks are feeding off the crumbs. Notts County nearly got relegated, Lincoln did. Mansfield lost the FA Trophy with the last kick of extra time. In short, proper football in this area is in the doldrums. And yet the non-league game keeps pottering along. Just. Times are tough at the £2 – £6 end of the market. Gedling Town died, and came back. Church Warsop have gone. Ilkeston Town have gone. (albeit Ilkeston are set to return next season, without the Town). God only knows what is going off at Glapwell. Retfordtook voluntary relegation as Worksop got a pass back home. Mansfield were locked out. Eastwood were phked over. And there would be so many more if my memory weren’t so shocking. The biggest crowd I have experienced this season, Lincoln’s relegation aside, was at Heanor v Gresley. An attendance of 308 saw what was pretty much a East Midlands Counties Football League title decider that was complicated by the nefarious exploits of the Hinckley manager knowingly playing ringers in previous games. It ended nil-nil. The lowest crowd was 12 at Welbeck Welfare in the Central Midlands League. A game which kicked off at 6pm as their landlords, Church Warsop, don’t have floodlights. Only, they couldn’t muster a team until gone half six, meaning that there was no halftime as the ref battled to beat the sunset. I saw a mascot called Elvis Gresley, and a gorilla playing the drums. Black eyesand Butcher-style head bandages. Too many fancy dan boots to be healthy. I sawfat officials and glamorous physios (photos kept in my own private collection, sorry). I saw dugouts on wheels and adapted supermarket trolley shelters. PA systems that could deafen you. I saw mud baths and dust bowls, mini tornadoes and major snow drifts. All of which those concerned just played through, around, over or under. I saw many players who could, arguably should, be playing at a higher level. And a good few who have reached their peak on a muddy and windswept field in the East Midlands. All of them worked alongside me and alongside you. They didn’t get gagging orders. They didn’t need to, no-one cared about them. But they played with all the enthusiasm of school kids much of the time. And for that I thank them all. It was, in truth, an odd season. I made numerous new acquaintances via Twitter. Hence this post, in fact. Yet my footballing exploits continue to be largely solo efforts. Watching lincoln on the last day of the season, I got all misty eyed for times when I was part of a gang, caring passionately about the result. But then I saw fans baying at referees and players, and I was happy to be rid of such traits. Maybe that sounds elitist and pompous. Tough. There are many things wrong with football, and so many better writers than I have analysed the financing, the player power, $ky, the Premier League, dodgy chairmen and all the rest. But we as fans rarely look at ourselves, and at our behaviour. I hate to say it, but I think by and large football fans have got the product they deserve. In a last ditch bid to restore some levity after post Jesus, that took an unexpetcted turn for sober contemplation! I apologise. By way of trying to steer this post back toward the lighthearted jocularity you come to expect from TBIR, please dust off your dinner jackets, prepare some speeches and hold on to your hats, as I unveil the inaugural, and completely unheralded Beaties. (On a side note, it turns out Beatie is the name of the world’s first sex change father. And I was innocently looking for unflattering photos of James Beattie or Maureen Lipman from the BT ads!): Favourite food – Glossop North End Favourite game – Radcliffe Olympic v Tipton Town Favourite clubhouse – Staveley Miners Welfare Favourite ground – Borrowash Victoria Fans of the Year – FC United Pub of the Year – Dead Poets, Holbrook Club Name of the Year – Thurnby Nirvana / Birds Eye FC So that was season 2010-2011 at Beat The First Man. Asides from a new home for the blog, and an alarming upturn in Twitter followers, it was much the same as the season that preceded it, and likely to be mirrored in the future. I should really work in marketing. You can follow Beat The First Man on Twitter here, and visit his excellent website there.
Share
Tweet
Share
Pins
Share
Like

You do feel for clubs that are penalised with points penalties through no fault of the current players or management team.  You feel even sorrier for the fans.  I know f...