Share
Tweet
Share
Pins
Share
Like
Whilst we have racked up over 50 Non League games this year, we had the opportunity to “de-flower” a virgin in terms of grass roots football.  Christa Norman lives up north, speaks like a northerner yet struggles with knowing her Chorley Bun from her Eccles Cake.  As she is part of the GTC Media empire she was charged with arranging our Christmas party.  And she chose an afternoon out at FC United of Manchester. My first non-league game ever was to be FC United vs. FC Halifax Town on a very chilly December weekend. It was cold enough to freeze my nuts off – if I had any. I was a complete non-league virgin in a foursome, both excited and apprehensive about the game ahead, even more so than the fact that one of the owners of GTC Media had turned up in Manchester having come straight from a Christmas party in Denmark still wearing make up (No comment – ED) 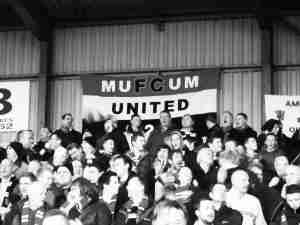 After a trip round a few of the dodgiest pubs in Manchester where those southerners razor sharp wit left me needing plasters (see we can do sarcasm too),  we headed by tram up to Bury, home of Black Pudding, Cherie Blair and Sir Robert Peel.  I didn’t know any chants, nor did I drink alcohol, which seemed to be the sole diet of the fans shouting “Bring on United!” at the north end for the pre-match warm up. Without the glamour of TV coverage and household names of teenage-boy heroes like Rooney, Fabregas and er Jermaine Jenas,  I could be facing a long 90 minutes. So what should a non-literate football girl take along to ensure enjoyment of the game? A cuticle remover, cuticle stick and a four way nail buffer of course. An escort by three football experts plus a timely donation of a thick coat to keep my legs warm was welcomed. Part way through the first half I had managed to push back my cuticles on both hands whilst quizzing the nearby expert (that would be me then – Ed) on football trivia.  I was becoming an expert on the game, and my nails looked pretty darn good as well.

I asked about female referees and whether they were in existence. Apparently so, referees such as Wendy Toms and Amy Fearn were two such examples. I was even more astonished to learn that a Premier League referee can be paid as much as £60k per annum. I’d consider the career change myself but I don’t think I could handle the abuse for unpopular decisions or a sweaty irate latino shouting at me inches away from my face.  I get that free at work anyway. At half time we got up and went down into the bar.  Of course the bar.  After all it had only been 45 minutes since the fans had had a drink.  We were in the moustached bar.  Or that seemed to be the theme, with every picture on the wall featuring a man with facial hair.  They boys looked aghast when I questioned who Derek Mountfield was so I shut up when I got to Micky Walsh. 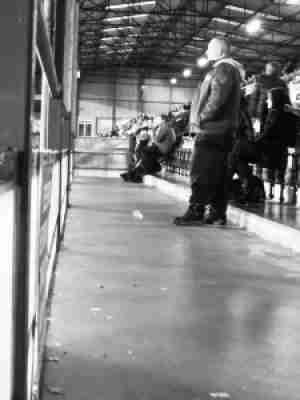 As the second half commenced it was time for filing and buffing. I wondered if real WAGs did their nails at matches, or whether they gazed longingly and attentively over the pitch watching their lover’s every move. Did she sympathetically share the disappointment of every lost challenge and the joy of dodging a tackle from a vexed defender? I doubt it. Conversation turned to the meaning of the “Ooooooh”, “Ooh”, and “Aaaah” exclamations from the crowd. I was told of the player called Park Ji-Sung, Manchester United’s Korean winger and his associated chant. “Park! Park! Wherever you may be, You eat dogs in your home country! It could be worse, you could be Scouse, Eating rats in your council house!” I felt I could laugh at this chant as I have a South Korean sister in law in the family. I don’t think she has actually eaten dog but I’ve heard of other delicacies such as live octopus and silkworm gracing an authentic Korean menu. My laughter was soon cut short by a goal by Simon Garner of FC Halifax followed by the hushed crowd around me and occasional swearing. With nails filed, my attention turned to buffing to occupy my thoughts for the remaining minutes and to sooth away the tension. 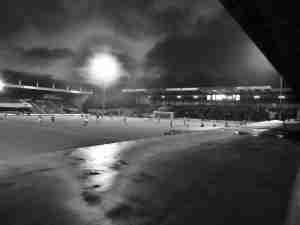 By the time of the final whistle I could walk into the bar with nails shining. I was greeted by a lonely old man, his gaze fixated on the TV screen which was reeling off today’s scores systematically from around the country. His half-drunk pint of indistinguishable beer lapped at by sorrowful bubbles in the glass. Despite the subdued smell of loss in the air, people were remarkably upbeat. People began to flood in to talk of the future and community work, soon the bar was buzzing with hope and ambition for the future. FC United is a club to watch. Perhaps with a little buffing and time, FC United will come up sparkling.” Christa is available to escort you to any football matches and look glamorous yet disinterested on request.
Share
Tweet
Share
Pins
Share
Like