Getting promoted with an 88th minute penalty, a loss manager Neil Young to the new Chester FC and large scale restructuring of the squad due the gutting that followed, and it was no surprise that the Seagulls were 33/1 to get promoted, one of the outsiders. As a Bay fan myself, I’d have taken 11th place with open arms, and doom-mongers had predicted that the best we could hope for was 17th. An average pre-season lead to the first competitive game of Dave Challinor’s managerial career with North Ferriby United, one of the pre-season favourites and a tough game. A game that the Bay won 3-1 and saw Colwyn Bay on top of the table on day 1 of the season. This saw many a Bay record the moment on Sky Sports.

Bay’s season was brought crashing down the next game, with a loss at home to Ashton United, but the Seagulls recovered. Two draws against two top teams (Halifax and Bradford Park Avenue), and Bay’s target of anywhere higher than 17th was back on. Results however started picking up. Early exits from the FA Cup (to Guiseley) and FA Trophy (to FC United), saw them focus on the league, and the Bay entered the playoffs following a 3-1 win at home against FC United, albeit playing a fair few more games than the opposition. A position they maintained at Christmas. 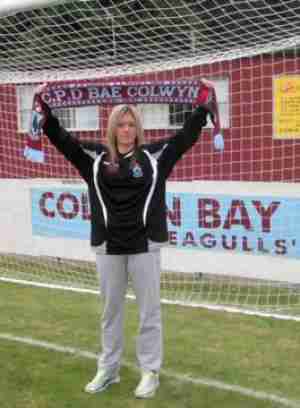 In the New Year, Colwyn Bay managed to maintain their position at the top. Demolishing Bradford Park Avenue 4-1 was however the last of the heavy victories, with Challinor operating a lot more defensive approach. It seemed to work, holding Buxton to a draw away and a Northwich Victoria victory which saw them hold a 1-0 lead for 75 minutes. All of a sudden, we were safe for another season, and second in the lead. A position consolidated on Titanic Tuesday (a Tuesday when all the top 10 teams played each other), and – although defeats to Stocksbridge and Nantwich saw us falter a little from our safety position – we secured the playoffs with a win away at Hucknall. A result that all but relegated Hucknall. The next game, following beating Nantwich and FC United slipping up against Kendal, Colwyn Bay secured second, two home games away from the Conference North. North Ferriby was first up, and a Rob Hopley goal after 11 minutes saw Colwyn Bay take the lead. On the stroke of half time, Jimmy McCarthy bravely threw his head onto the end of a ball that saw him clash heads with a Ferriby defender sealing his eye shut almost immediately and meaning he missed the playoffs final. However, the ball sailed past the keeper and saw Bay take a 2-0 lead. A lead they held onto for the entirety of the second half. In the other semi-final, FC United beat Bradford Park Avenue, resulting in Colwyn Bay vs. FC United at Llanelian Road. All ticket. 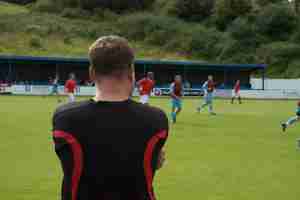 The fact that I had to queue for tickets to get into my club was completely alien to me, but 8:45am on Saturday morning, I was found outside the ground waiting for the tickets to go on sale an hour and forty-five minutes later. The previous day, word got out that tickets were being sold early, but this was abandoned when 3,000 “fans” turned up, each wanting 100 odd tickets. I managed to grab a couple, the game was Bank Holiday Monday, and two nights of restless sleep followed. The game arrived and we entered the ground three hours before kickoff. Bay fans were seriously outnumbered in the Bernabay (with FC fans also commandeering a bank above the ground). This felt like FC’s time. FC United had plenty of pressure in the first half, but with no clear cut opportunities. In contrast, Colwyn Bay had the better of the chances, admittedly coming from mistakes from the FC United back four. With that said, if the Bay could capitalise and one of these errors. Maybe, just maybe. The second half, 69th minute (yes, really), Bay did just that. A failed offside trap saw Jon Newby run onto a one-on-one situation with the keeper and slotted past keeper Sam Ashton, cementing his name in the 125 year history of the club. Colwyn Bay 1, FC United 0. Colwyn Bay were in the Conference North. I invaded the pitch at full time with delirium, injuring my ankle in the process (I can’t vault barriers gracefully), Colwyn Bay had been promoted. My work colleagues watching the game streamed online commented my celebration looked like “An over-excited, fat Pokémon Trainer”. The season culminated with a win of the North Wales FA Cup two weeks later. Favourite bits of the season? The final was unbelievable, even if it took a month of my life. The bad bits (of which there were few) paled in insignificance and really weren’t football’s fault (Northern Rail trains being an hour and a half late following an away Tuesday at Burscough was one of them). And what of next season in the Conference North? Well we’ve only one goal. Consolidation. You can follow Rhys on Twitter
Share
Tweet
Share
Pins
Share
Like

David Silva has signed a new one-year contract with Manchester City which will keep him at the club until 2020, mancity.com have announced. The 31-year-old joined the Citizens in 2010 an...