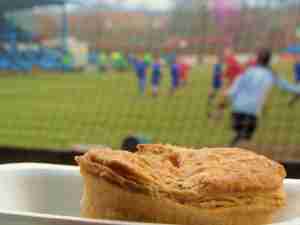 So after 54 games, about 350 pints of various beers and God knows how many miles covered in watching games in 9 different leagues our Non League season has come to an end.  It started just a quarter of a mile from TBIR Towers front door on the 9th July when we watched Greenwich Borough take on Leyton in a pre-season friendly.  Who would have predicted that the visitors on that sunny afternoon would be no more six months later. But that sums up Non League football perfectly.  The only constant is change. We’ve seen a few strange sights at Non League football this year.  Dogs, cats, a fox or two.  Non League Wags have started to make an appearance with their fake tan, fake D & G handbag and real tits.  We’ve met a few new friends along the way, as well as meeting a few complete dicks, but less so than we would ever see in watching 54 games in the Premier League. We’ve interviewed managers, players, owners, stewards. photographers, announcers and one or two celebrity fans.  We’ve seen some fantastic games such as the Lewes’s late win over Braintree United, or the first ever Canvey Island derby.  And we have seen quite a lot of rubbish games too.  But we never lost that “well that was a waste of time and money” feeling walking away from any ground this season.  So here below is our edited highlights of the season.  Enjoy.

Liverpool are chasing RB Leipzig youngster Dayot Upamecano according to German newspaper Bild and the Liverpool Echo.  The 18-year-old is considered to be one of Europe's ...