Share
Tweet
Share
Pins
Share
Like
After the successful launch of our campaign, and our feature on the BBC Non League Show no less we are ploughing on with points 4 to 6 on our agenda for change.  To review or comment on points 1 to 3 click here, otherwise forever hold your peace. 4. All clubs to offer free entry to under 16’s. Let’s face it, children should not have to pay to watch football.  In fact how many actually watch the whole game anyway? Earlier in March I took both of my young children to Chelmsford City.  They were charged £3.50 each.  £7 for two under ten’s who were then going to spend about the same on snacks, sweets and drinks.  They saw no value in the £7.  How is charging that amount encouraging parents to bring their children to the games. 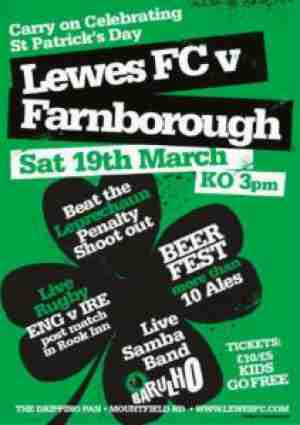 Families are being priced out of the professional game.  Even in League Two, a child of 7 years old can be charged at up to £10.  In the Blue Square Bet Premier some clubs charge up to £7 for juniors which again is far too high. My reasoning?  The pocket money test.  Apparently the average weekly pocket money for a ten year old in England is £4.92, well according to the Daily Mail so it’s not 100% correct.  In the Fuller household it is £2.50, rising to £3.50 for chores.  So according to Crawley Town, if a ten year old wanted to go to a game they will have to pay twice the weekly “salary” of my ten year old.  To put that in an adult context, if they charged the same twice the weekly wage to get in then a ticket to watch a Blue Square Bet Premier league game would cost over £1,600! At the start of this season I did some research on behalf of Lewes FC on ticket prices.  The cheapest basic entry in the league was £9, the most expensive £11.50 (Chelmsford City again).  But only two clubs offered free entry for the under 16’s – Lewes and Farnborough.  Since then a number of clubs have brought in the scheme realising the value it has as a marketing tool. As Peter Kay said, children are the future so clubs should be doing everything they can to get them in young AND engage with them.  It costs the clubs zero, not a bean, zilch, nothing to accommodate a child standing on the terrace, so why charge them at all?  You know full well that they will harrang their parent(s) for money to spend when inside so let them in free. Benefit for the clubs – it boosts their attendance figures, kids will want to come back if you engage with them and they MAY just realise there are more bragging rights at school about being an actual attending Dartford/Boston/Hyde fan than an armchair Spurs/Liverpool/Portsmouth one. No brainer really, but we all know that some clubs keep their brains in their wallets. 5. Allow fans to be able to drink beer on the terraces whilst watching the game. On the day that Lewes FC were relegated from the Blue Square Premier in March 2009 a number of fans actually rejoiced as the demotion back to the regional league meant that they could once again enjoy a fine pint of Harveys beer on the terrace.  One of the joys of the non league game is being able to have a beer and enjoy the game in front of you. 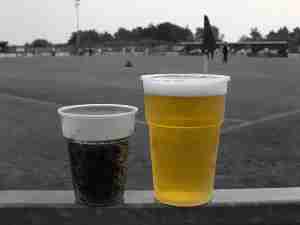 Not all clubs are allowed, or even allow fans to drink outside of their club houses for a number of reasons.  It may be down to specific licencing regulations, it may be down to covenants on the ground or it may simply be because they do not trust their fans to behave.  I would hope it is not the latter, but there does seem to be some huge inconsistencies on the regulations regarding alcohol and watching non league football.  So let’s make it simple.  Allow beer to be drunk on the terraces at all games. I simply do not see what the issue is?  We covered this recently on TBIR here so have a read of that as well. Bar staff can still refuse to serve fans who appear to be already under the influence, the club boosts its revenues as instead of a mad rush in the fifteen minutes of half time trade will be more spread out and their premises becomes more appealing to breweries for promotions. We’ve seen a number of large travelling groups of support down at The Dripping Pan this season.  Dartford came in their hundreds, drank lots, sang lots and thoroughly enjoyed themselves.  Ditto Chelmsford City and Woking.  One of the reasons was that Lewes is seen as a “good day out” in their calendar – and one reason is the fact you can have a beer whilst you watch the game.  Ditto The Beveree, home of Hampton & Richmond Borough. Let’s assume that you have a crowd of 500.  Of those, 250 are having a beer.  A sensible (chortle) man may have a beer every thirty minutes, so they may have 3 during the game.  A beer costs £3.50, of which the club makes £1.  So allowing alcohol on the terraces is worth in this case 250 x 3 x £1 = £750, times 24 games (league plus a couple of cups) = £18,000 profit for the club. If it is not allowed then this number will be reduced dramatically.

I am not going to get into this whole cricket/rugby debate as to why they can drink whilst a game is going on and at football you cannot.  Test matches go on for 7/8 hours but alcohol is served for the whole period (bar a one hour “cooling off period” after lunch) without any issue at all.  23,500 pissed up people at an Ashes test at the Oval or 100 watching Worthing versus Ramsgate?  Which one poses the biggest issue?  Well apparently the latter as alcohol would not be allowed to be served for such a game at the A2B Arena. One final point…The FA Trophy and Vase. The cup competition for steps 1 to 7 in the Non League pyramid.  Step 1 (Blue Square Bet Premier) clubs do not allow fans to drink in sight of the pitch….yet the competition is sponsored by….Carlsberg.  Insert your own “if Carlsberg did” tag lines there. 6. Play the FA Trophy and FA Vase at Wembley on the same day. Last May Wembley Stadium hosted seven “cup finals” plus an England International.  The level of criticism that was aimed at the FA for playing so much football on a poor pitch was understandable, but they claimed they could do nothing about it.  Well, with the UEFA cash cow rolling into town this year it is amazing to see that they have bent over backwards to ensure the pitch is used sparingly prior to the showpeice event. Two particular events do not need separate dates in the calendar.  The FA Trophy and Vase competitions are worthwhile for the clubs who play in them, but do they really need to be played at Wembley on different days?  Look at the attendances for each in the past three seasons:- FA Trophy 2010 – Barrow 2 Stevenage Borough 1 – 21,223 2009 – Stevenage Borough 2 York City 0 – 27,102 2008 – Ebbsfleet United 1 Torquay United 0 – 40,186 FA Vase 2010 – Whitley Bay 6 Wroxham 1 – 8,920 2009 – Whitley Bay 2 Glossup North End 0 – 12,212 2008 – Kirkham & Wesham 2 Lowestoft Town 1 –  18,000 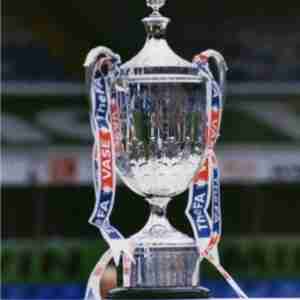 So in a good year the combined attendance is less than 60,000 or two thirds of the stadium.  Last season it was half of that.  How difficult would it be to play both games on the same day?  Make it a real Non league day out – a celebration of the grass roots.  Wembley can easily cope.  The stadium can be segregated in a number of ways, the changing rooms are big enough to cope with two NFL teams plus their huge entourages so four football teams will not be an issue, and then the ground staff have an extra day in the calendar to repair the pitch. In fact the FA could actively encourage neutral fans to the finals day.  Last season ticket prices for the FA Trophy ranged from £25 to £45.  Eventual winners Barrow AFC charge visitors to their fantastic Holker Street ground £13.and For the FA Vase they were £25 for Adults and £12.50 for concessions.  Again, call me old fashioned, but why should Kings Lynn (semi finalists this year)or Barrow fans be expected to pay almost 4 x as much for a final ticket as they would for a semi final one at their ground?  But if you make it a double header then there is value in the combined ticket – £30 for two games at Wembley Stadium.

And whilst we are at it, why not give every club in steps 1 to 7 (aka all the teams that could make it to either final) some free tickets to give away for the finals day?  This season a total of 815 teams entered the combined competitions.  If we assume that a maximum of 60,000 tickets are allocated to the four finalists, and that 10,000 tickets are used for segregation and the corporate bunnies, that leaves 20,000 that could be distributed.  Give each club 20 tickets to be distributed or used as competition prizes.  Fill up the stadium, make it a real Non league day out.  9,000 people who have paid £25, sitting in a stadium for 90,000 is not a good day out irrespective of the result. The third and final part will be published next week.
Share
Tweet
Share
Pins
Share
Like

Lose your pounds or lose your club

We all know that Non League football is going through a tough time.  At the top end of the pyramid, clubs like Luton Town, Wrexham and Grimsby Town are operating almost as League clubs st...