Share
Tweet
Share
Pins
Share
Like
The tie up is quite obvious when you think about it, but it still raised a few eyebrows when it was announced yesterday – Budweiser, the King of Beers has announced that they are entering into a partnership with Combined Counties League side, Wembley FC.  Being a firm fan of the non league ground, I welcome any “big business” getting involved in our grass roots game. 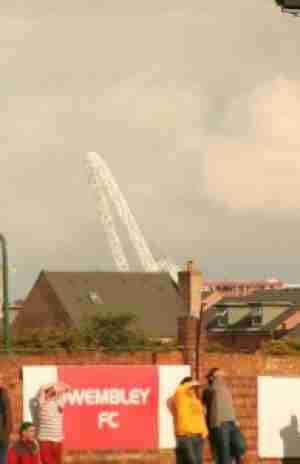 The deal forms part of Budweiser’s long-term FA Cup commitment to grassroots football, championing clubs at all levels and bringing the romance and heritage of the tournament closer to the fans. Budweiser will be working closely with Wembley FC to bring forward infrastructure improvements to enhance the club and player facilities, including a clubhouse upgrade and provision of a team minibus.  Other initiatives include the implementation of a new responsible drinking programme as well as promotion of the club in the wider Wembley community. Jason Warner, Global VP Budweiser, commented, “We believe that the best way to champion the FA Cup is to celebrate its uniqueness from the grassroots up. Wembley FC has an incredible heritage and story to tell. We look forward to helping fulfil their dreams.” Budweiser’s continued support of local teams in The FA Cup follows on from last year’s success with the first-ever live streaming of a sporting event on facebook which saw over 30,000 people worldwide view the extra-preliminary round match between Wembley FC and Ascot United. This ambitious move will hopefully see the football underdogs’ FA Cup journey continue further than their First Qualifying Round exit in the 2011/12 season. Iain Newell, Budweiser’s Marketing Director, added: “The sponsorship of Wembley FC is consistent with Budweiser’s commitment to the sport of football and our involvement with the FA Cup. The type of improvements with Wembley FC will showcase our intent of working with grassroots football in the UK. We have further exciting plans for a grant programme that other non-league clubs will benefit from. This is a joint initiative between Budweiser and The FA and more details will be announced in due course.” Brian Gumm, Chairman of Wembley FC, comments: “We’re not a big club but we have big ambitions. With Budweiser as our sponsor we now have a shot at making those dreams come true. For more information on The FA Cup with Budweiser visit www.Facebook.com/BudweiserUK
Share
Tweet
Share
Pins
Share
Like

About Westleigh Park Westleigh Park was home to Havant Town from 1982 onwards while Waterlooville F.C. played at the now extinct Jubilee Park. When they merged in 1998 it became home to ...