Revenge is a dish I’d rather not have to eat

Share
Tweet
Share
Pins
Share
Like
The term “after the Lord Mayor’s show” could not be more apt this weekend as Lewes play their first home game in a month. On Tuesday night I followed proceedings in the Ryman League Cup semi-final, using the Twitter equivalent of the refresh button on Ceefax. The most important game in almost a year for the club ultimately ended in close defeat to Essex upstarts East Thurrock United. If Ernie, the fixture computer was alive today, he would have raised a wry smile as the Rocks hopped on their fun bus and headed south to the Rooks. A chance for some immediate revenge perhaps? 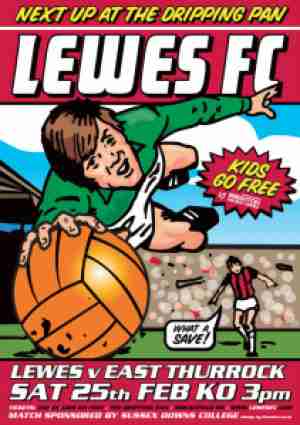 In early December East Thurrock United sat in the relegation zone whilst Lewes were in the play off places. A week is a long time in football, let alone 11 1/2 of them and coming into this game twelve points separated the sides, with the Essex team having four games in hand. In terms of current form the stats could not be more contrasting. In the League East Thurrock had taken 13 points from a possible 18; Lewes just 2. Why had there been such a reversal of fortune? That would be the power of the FA Cup. As of the 31st January East Thurrock had played 14 games in the FA competitions. They reached the first round of the FA Cup, drawing Macclesfield Town at home which was televised. The prize money alone for that FA cup run was £27,500. Add in the gate share in the seven games they played, plus the TV money and you will get a figure close to £50,000. Add to that the £14,000 from prize money in the FA Trophy and you will get a figure that is probably 75% of their annual playing budget. And with that cash the club has been able to strengthen their squad accordingly. Lewes, on the other hand, were knocked out at Chertsey Town in the FA Cup in the first qualifying round and would have got less than £1,000 as a share of the gate, and around the same after being knocked out of the Trophy at the first stage to Harlow Town. Success or failure can rest on a kind draw in the non leagues. An air of gloom had descended across the Dripping Pan with recent results and a few player exits. However, in Worms we believe and so the second best fans in the Ryman Premier League (based on average attendances) turned out in force to welcome not only our midweek conquerors but to also ceremonially switch on our new solar panels. Lewes had gone Green. 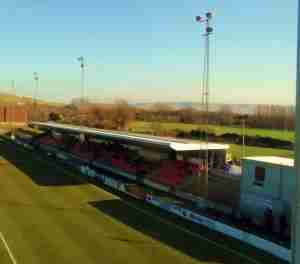 Lewes had become only the third football club in England to install solar panels within their ground in the past few weeks when 170 were put on the main stand roof. However, unlike Barnsley and Forest Green Rovers, Lewes offered the opportunity to the fans to “buy” a panel (or two or fifty) and generate some long-term revenue for themselves under the previous Government’s scheme on solar power stations that the Tories were trying to stop. Lewes don’t like to do things the normal way as you will be aware by now. There had been a few player movements since our last visit some four weeks ago to the Pan. Out had gone popular full back and our very own sponsored Nic Ciardini. Fans often forget that these players have day jobs and in an age when retaining a job is the best we can hope for, the chance of a promotion should be grabbed with all four limbs. Nic had been given a new opportunity but it would mean he would be based down in Bath most of the week and so initially he asked to go to a Non-Contract basis with us. As is the case in Non League football, you can play for two teams at the same time (not literally until time travel has officially been discovered by Dr Emmit Brown) and so he was able to register to play for Farnborough, being his local club. In Boys-own style he came off the bench and scored the winner in his first game. 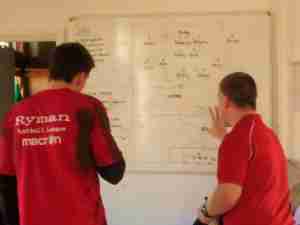 But back at the back would be Chris Breach. Last season’s captain and player of the year had returned after a spell along he A27 with Bognor Regis Town. Joining him in the squad was Nathan Crabb, brother of Sam Crabb who two seasons ago was part of theEFW/TBIR real life fantasy football challenge between myself and Danny Last. Crabb was a proven goalscorer at this level (and above) with Eastbourne Borough and Town and so the optimism barometer jumped with the news of his signing. Before the game we had two goodbyes to recognise. Firstly commercial manager Steve Duly was leaving us (ironically also going back to Farnborough as their new CEO). Steve had been a great asset to the club since joining but had been making the four-hour daily round trip from his home which is obviously not conducive for his family.  One of the good guys of the game, he will be sorely missed. 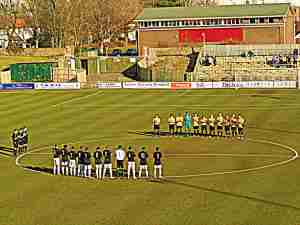 Secondly, we paid our respects to Simon Wormull’s father who passed away last Saturday.  A minutes applause prior to kick off saw the 444 fans in the ground rise and all join in, giving sentiment both to Mr Wormull senior but also to Simon who has carried on with his managerial duties all week, including leading the team on Tuesday night.  Formalities over it was time for the action to begin. Lewes 2 East Thurrock United 2 – The Dripping Pan – Saturday 25th February 2012 At 3:04pm as I was taking delivery of my pint of Harvey’s we did something we haven’t done for a while.  We scored a goal from open play.  A real goal.  I had heard the pre-match team talk from Worms and the team were fired up after their defeat to the Rocks on Tuesday.  And with their first real attack Paul Booth rolled back the years to put Lewes in front. With three “debutants” settling in well, and Charlie Leach and Max Howell getting another start this was like another team we were seeing from our last home game four weeks ago. Ingram especially in the Lewes goal, on loan from Wycombe Wanderers and our seventh keeper of the season, looked the part and made some early saves to get the crowd buzzing. 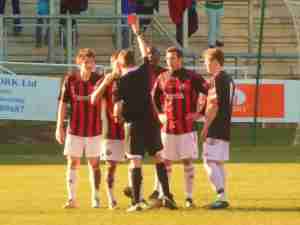 But our hopes were temporarily dashed in the 16th minute.  The FA have quite rightly invested serious amounts of money on their Respect campaign.  But respect has to be earnt, and with an idiot in charge such as Mr Laver what hope has the campaign got to succeed?  He booked Jack Walder in the 11th minute for no more than a block challenge, and then five minutes later after Walder had cleared the ball an East Thurrock player fell over his leg, rolled around on the floor and saw red for a “late” challenge?  He not only got to the ball first, he didn’t make contact with the opposition player – it was vice versa.  Laver is no stranger to controversy, having got a Brighton player sent off in their home game v Burnley in December when he was the fourth official. It wasn’t just this one decision.  Two minutes later an East Thurrock player went in late on Harry Harding, leaving them in a heap on the floor.  Free kick given, but no sign of a card.  Even the East Thurrock bench laughed at the decision.  We did obviously try to engage the linesman, but they too had no respect for anyone so they just ignored us.  The rest of the half was nervous. Ingram made a couple of excellent saves but the Rooks went into the break ahead.  Could it be? After my fill of boardroom food (Tesco Onion Ring crisps are an absolute winner), it was back to the action.  East Thurrock came back into the game in the 59th minute when they exposed Kamara down the left and Matt Hall scored.  Ten minutes later it looked like the same old story as Thurrock took the lead thanks to a thunderbolt of an effort from the edge of the penalty area that no keeper in the world would have stopped. 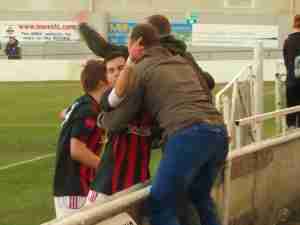 But is there a new Lewes just waiting to burst out of its shell?  Wormull threw on new signing Billy Medlock and he proved an instant hit when he headed home Nathan Crabb’s cross with five minutes to go.  He ran to the crowd, Jamie ran too him, throwing his beer up in the air to drench the players. Did they care?  Not at all. Lewes could have taken all three points when two minutes later Matt Somner’s drive was turned round the post by the East Thurrock keeper.  Instead it ended all square and the fans showed their appreciation of a battling performance which despite an incredibly poor display by the referee had stopped the rot of defeats.  Some may question why we would celebrate a draw at home against a team below us in the table, but if you have read the above you will understand why. It was an emotional end to an emotional day in East Sussex. From this point it has to be onwards and upwards (please?)
Share
Tweet
Share
Pins
Share
Like

Posted by stuartnoel on September 13, 2010 Life must have been swimmingly for South Park FC up until Trey Parker and Matt Stone shared a beer in a bar in Colorado in the mid 1990′ ...