Share
Tweet
Share
Pins
Share
Like
This was not in the plan. Today was all about Glapwell – the search for their fans and Joanne Guest. But instead the northern climate put pay to that idea early on Saturday as well as Plan B (not literally as we tend to like his tunes in TBIR Towers). But having good time management meant I had already scoped out a Plan C. Big tick in the box for that. The only problem is that Northern Steve’s gaff is the only place in the UK it seems without any mobile phone coverage, and when Sky decided to cause him terminal t’internet trouble we were catapulted back to the seventies in terms of communications. 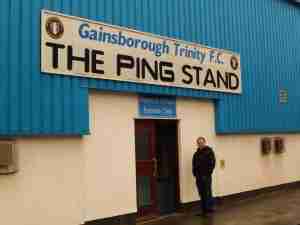 We sent out a carrier pigeon to the nearby town of Gainsborough, and a few hours later it returned saying “eh up lads, game is on”. So we were off, following road signs confusingly for a place called “Gainsboro’ “. It seems the local councils up here realised that by saving 2 letters off every road sign they could make enough money each year for their Christmas party. We drove through the flat Lincolnshire countryside, passing a second ex-Little Chef that had been converted into an Adult Shop (the 1st FYI is on the A1 going south just after Grantham). The poor locals must get terribly confused. One day they would be popping down for nibble on a muffin and the next, well , they could have a nibble on a muff in(side). Northern Steve is a bit of an expert on Gainsborough. He used to work there and in fact is responsible in some ways for its financial prosperity today. And by that I mean it now has a Next. A few years ago you could buy a house here for less than £10,000. Need a mortgage sir? No just a personal loan. Those days have changed and now a two up two down will cost you the price of a BMW X5, second hand with one careful WAG owner. The football ground is just a throw of a bottle of cheap alcopop away from the town centre. Northolme sounds so grand, conjuring up images of a stately home on the side of a river. Sorry to ruin your dream but the home of “Trinity” is not quite as utopian. It has one small stand, which is named the Ping stand after the sponsorship of the local and world famous golf equipment manufacturers, a covered terrace opposite and one behind the goal and then an open terrace at the west end of the stadium. The club had tried to build some interest in this important game and ticket prices were just £5 for adults, a saving of 50% (“Still £6 too much if you ask me” said one of the locals as we went in). However the main draw in these parts is league football and with Lincoln City (playing Chesterfield), Scunthorpe (playing Derby) and Nottingham Forest all at home it was going to be a tough job raising the average attendance by more than a few local armchair fans. Top marks for the club for trying something in the worrying times for the non leagues. 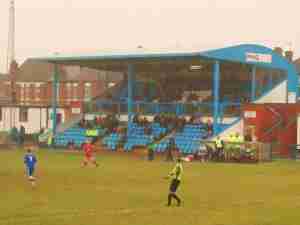 We parked in one of the side streets near the ground and it was disappointing that nobody wanted to “mind our motor” as we would have paid for the privilege in the “interesting” street. It has to be said that the noise coming from inside the stadium was impressive. Music and chat drifting out of the ground and filling the streets all around. The reason for that was some bloke had essentially set up his Saturday night disco kit (Dave’s Wheels of Steel – Weddings, Birthdays, Bar Mitzvahs, Wakes and Getting Out parties all catered for) on the terraces with his two huge speakers plonked down on the terrace. The crowd was an interesting mix. The old school hardcore Trinity fans all congregated around the halfway line. And by old school I meant they went to a very old school. A very traditional cloth cap support base who have probably seen the lot standing on the terrace. There was even someone with a pipe! When was the last time you saw a pipe at a football match? And then behind the goal was a group of young chaps and their “birds”, who had obviously been treated to a morning of shopping in Rodeo Drive Gainsborough style with their Matalan and Poundland bags. Still they were at least vocal and a few had scarves which at least shows there is some engagement between the club and the young fans. The visitors were Stafford Rangers who were in more Dire Straits than Mark Knopfler. Sitting in 20th place, one spot below Gainsborough but six points behind. After the early season sad demise of Ilkeston Town, the league only has 21 sides meaning that relegation this year will depend on who comes down from the Blue Square Bet Premier. At the current time it looks like it will be only one northern side (Altrincham) which would mean the number of teams relegated would be up in the air. They were once a mighty force in the Non Leagues, and were one of the clubs that could name Stan Collymore as an ex-player. Good old Stan has now moved onto presenting on TalkSport, talking crap to the nation. On the way to this game he told the listening public that “watching a football match streamed on the internet was illegal”. Really? So al of those people who subscribe to Sky TV Mobile are watching the games illegally? Buying services from people like FilmOn is illegal? He had obviously been reading up before his presentation beforehand as he used the phrase “The genie is now out of the bottle FOUR times in one rant”…world class. 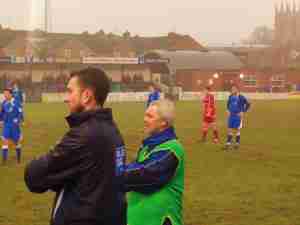 Brian Little is manager of Trinity these days. The same Ian Lavender lookalike (as your Mum and Dad about Private Pike in Dads’ Army kids) who once took Aston Villa to 5th place and into Europe twice. Quite how he fell so spectacularly is hard to fathom but here he is today planning strategies against the likes of Vauxhall Motors, Guiseley and Solihull Moors as opposed to Xamax Neuchantel, Spartak Trvana and FC Jazz. He came over to have a chat with us post game as we watched the teams warm up. “Alright lads, how’s it going?” I think we had a look of continental scouts from Azerbaijan looking for the next manager of FC Baku which tempted him to come and chat…. Gainsborough Trinity 2 Stafford Rangers 2 – Northolme – Saturday 20th February 2011 The teams came out, not from the same tunnel, but one from each side of the main stand. This must cause some confusion for the officials as they are only three of them so one team will get “favoured” with two of them. At the old Belle Vue ground in Doncaster they got round this issue by having a THIRD tunnel for the officials. After a minute’s silence for the passing of the old club chairman the game started. The poor weather meant that passing along the ground was impossible. With both sides fielding centre backs that made the England rugby back row look “slight” the ball rarely saw the ground in the opening exchanges. The away team took the lead in the 5th minute when Niall Maguire got his head to a Edwards corner, sending the Trinity faithful into further depths of depression.  “Bugger off Little”, “Little wonder we are so shyte” and “We have Little chance of winning anything with you in charge” were some of the comments aimed at the managers.  You can never get tired of Little-based comments can you. 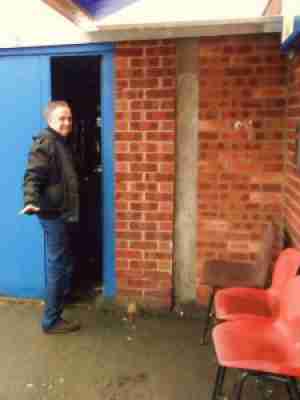 With time running out in the half we headed out of the “magic door” and into the bar next door where for just £2.30 we enjoyed a smooth pint of Mitchell & Butler’s Blueberry Ale.  “Smells like blueberry, tastes like blueberry but doesn’t have the feminine purple colour”.  A fair summation from Northern Steve who likes to be seen as a man when he is out and about in the bars of North Hykeham.  We also found out that we had missed Trinity’s equaliser, apparently a soft penalty given for a foul by keeper Lee Evans on Liam Mettam.  McMahon slotted home the spot kick. Talking of Lee Evans, there was a venue being advertised in the programme called, The Venue.  As a typical regional “entertainment” venue (think The Phoenix club in Phoenix Nights) I expect the odd tribute band such as Blurasis, YouToo and Take Twat.  But a Lee Evans “tribute” comedy act?  Really?  Why not just put on a DVD of him?  Surely it is just copying his jokes? 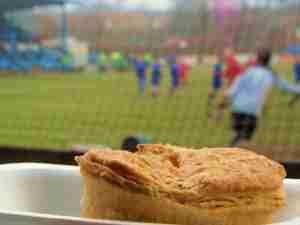 So we came back through the magic door and bought our Pukka Pies, and damn nice they were too.  As we put our extra gravy on there was a cheer and behind us Gainsborough had taken the lead as midfielder Peat unleashed a volley from 35 yards out (not my words but that of Ron – more of him to come).  Two goals in one game is a bit of a rarity here. We had a wander around the ground and popped into the club shop.  Lots of Gainsborough goodies to be had here and all reasonably priced.  We were approached by the woman who ran it who told us the story about the yellow away scarves.  Apparently at a recent away game, Ron (see he’s a big man in these parts) took 28 in his rucksack and sold them all!  As if on cue Ron came in and told us if we thought a yellow beanie hat would sell well.  Before we could answer a long ball wasn’t dealt with by the Gainsborough defence allowing Stafford’s Clarke to run unchallenged on goal before squaring for Levi Reid to tap home.  “Bloomin’ ‘eck” roared Ron, slamming his hand against the wall.  I could see cats being kicked all the way home later so we made our excuses and left. 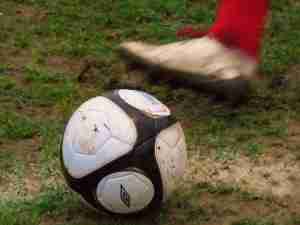 The last few minutes saw both teams threatening, with Gainsborough’s cause not helped by the two yellow cards given to Paul Mayo to complete a nightmare game for him as he was at fault for the Stafford second goal. A draw with help for neither team, but for Northern Steve and me we had the privilege of football, beer and a pie for less than a tenner – surely the whole trinity? Onwards and upwards as the next stop on our roadtrip is the Manchester suburb of Hyde for a Blue Square Bet North local derby.  We can’t wait! For more pictures from the day click here to view our Flickr feed.
Share
Tweet
Share
Pins
Share
Like

Chelsea keeper Thibaut Courtois has revealed that he has no intention of leaving Chelsea amidst speculation linking him to Spanish giants Real Madrid. Courtois, who’s been an insep...