Share
Tweet
Share
Pins
Share
Like
We’ve all seen those American movies immortalising the road trip, that carefree adventure on the open road, punctuated by freedom, adventure and hilarious consequences normally involving accidentally driving into “no go” areas, visiting churches dressed as strippers (or strip joints dressed as Nuns) and setting fire to hotel rooms. Well occasionally we get the opportunity to go on a road trip of our own. Who needs strippers and alcohol fuelled conceptual pranks when you could go to Cambridge, Mansfield, Hyde and Gainsborough all in the space of five days. We are really living the dream here I can tell you. And who needs a convertible to cruise Route 66 when you can have a 6 year old Zafira with crappy air conditioning cruising up the A1? It was of course Half Term and thus that means time with the family and football. The two go hand in hand right? Well, they do in the TBIR book and so we were heading up north to spend time with the extended CMF family, meaning some jolly japes with Northern Steve. And he had lined up quite a feast of football fun for us. A Evostik Premier League double header with Glapwell versus Stamford followed by a trip to see Gainsborough Trinity versus Gloucester City with the Blue Square Bet North game sandwiched in the middle between local Manchester rivals Hyde United and Stalybridge Celtic? Jealous yet? Well how about if I tell you they would be book-ended by Cambridge United versus Kidderminster Harriers and Lewes versus Ebbsfleet United. An 800 mile road trip encompassing five games in five counties. Green with envy now? Non League football is important to me, and it should be to you dear readers too. Because if Non League football dies, then eventually so will the game at the highest level. I love nothing better these days than heading off for some new grass roots destination and feeling the history ooze through the pores of a ground with real history. Attendances in all levels of football are falling on the whole. Premier League, Championship, Football League and Non League. Some fans are being priced out, but in general we are now reaping the reward of the lost generation of fans, the teenagers and young adults who were priced out of attending games in the past decade. And the situation is just going to get worse. Unless clubs start to encourage Dads and Sons back onto the terraces/shiny plastic seats those seats will sit empty in ten years time. 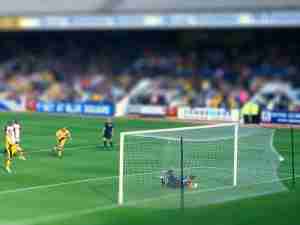 Non League clubs are doing their bit to grab this space. Many clubs at the Blue Square Bet level offer free admission for children, others charge a nominal pound or two. So I was going to do my own research as to how five different clubs were approaching the situation, starting with a Friday night visit to The Abbey Stadium to watch Cambridge United host Kidderminster Harriers in the Blue Square Bet Premier league. A few weeks before the game there was some doubt if there was actually be a game on at all. Despite a decade ago this game being a Football League clash, Kidderminster had come into the game in a whole world of financial trouble. On Sunday 6th February The Non League Paper had led with the headline of a potential move into administration for the club, the result of trying to chase the dream back of the Football League. Cambridge United themselves were hardly out of the financial woods. They too had invested in trying to get back in the league, and went into the Play Off Final in 2009 against Torquay United as favourites, only to see the Seagulls win 2-0 on the day.  Manager Gary Brabin was announced as the Conference manager of the season and was then promptly sacked by the board for not getting them back into the lead.  Nothing like a dose of realism from the men in charge. He was replaced by ex-Leyton Orient manager Martin Ling, who lasted just 8 days, resigning over “irrecoverable differences of opinion with owner George Rolls”.  Rolls then left and a new board was appointed and guess who they chose as new manager?  Martin Ling. Cambridge finished Ling’s first season in 10th place. This season, with the club sitting again in 10th place in early January the club’s owners put the club up for sale citing the need for new funds to take the club forward. Despite interest being expressed from a number of parties, no new owner has yet been found. The club’s landlords Grosvenor Group revealed the plans for a new community stadium, including potential new locations both within the city and outside it.  As if this wasn’t enough for the long suffering fans, Martin Ling left the club and has been replaced for the time being by Jez George. Who needs stability in football eh? 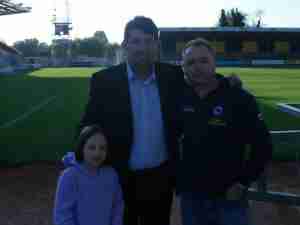 Our last trip to The Abbey Stadium had been in September 2009 in an eventful game for more than one reason. On that sunny day we had seen the home team take a 3-0 first half lead against ten-men Luton Town, only to end up losing 4-3 in a game that ended with riot police on the pitch. On that day we had been guests of Luton Town manager Mick Harford and after the game we sat down with him and discussed his tactical genius and what he said in the dressing room at half time. Harford was a hero to the Luton faithful and so hundreds, if not thousands of fans were amazed that just four days later he was sacked by the club as they sat in 5th place after just a handful of games into their first game since relegation from the Football League. And where did they finish eight months later? In 5th place of course. Football madness at its best. Cambridge United 1 Kidderminster Harriers 2 – The Abbey Stadium – Friday 18th February 2011 I simply cannot get my head around some of these ground names.  Earlier today I read an excellent blog post on European Football Weekends about the Hamburg derby, which was being played at the Intech Arena.  Where?  Well apparently HSV’s Volksparkstadion had been renamed AGAIN this summer.  AOL Arena, HSH Nordbank, Colorline, Mighty Mouse Arena – it’s all the same to me.  So forgive me Cambridge fans for not saying I visited the R Costings Stadium for this game.  It is the Abbey, and will always be the Abbey.  Rant over. 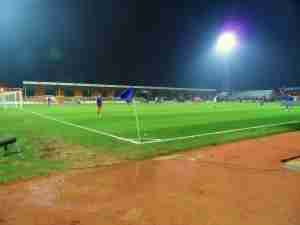 There was a time not long ago when Cambridge United won an award for the best League ground to visit(a scoring matrix from a book written by Jon Ladd) primarily due to their bacon rolls.  Unfortunately the bacon was not as I always remembered it and so I headed for a drink instead.  After a quick beer in the Green King portable pub in the car park (a portakabin done out with a bar inside) I headed Stand behind the south end goal at The Abbey and you can feel the history seeping its way from the old Main Stand or the covered terrace, in a time when John Beck played it long, and Dion Dublin well was simply long.  On a cold February night with the TV cameras from Premier Sports in attendance the locals had come out to support their team. Ah Premier Sports.  Now that is a strange deal.  Picking up the pieces from the collapse of Setanta, Premier Sports are showing 30 games this season on a pay per view model.  So far they have not released any subscription figures but I would not imagine many nationwide fans would have paid their £6.99 for this one.  So it is unclear who is the winner in this deal. The game started with a flurry of open play with both teams on the front foot.  Both keepers were called into action during the opening twenty minutes and a goal looked imminent, ruining my 8/1 on a goalless draw. 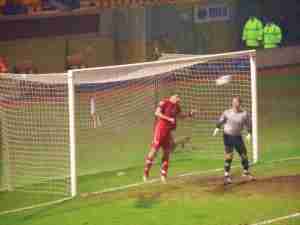 Almost on the stroke of half time Kidderminster opened the scoring, perhaps against the run of play.  A long cross from the right was missed by the Cambridge defence and found its way to Sean Canham who drilled the ball home.  Just two minutes later Cambridge were almost level when a free kick from the edge of the box was headed off the line by a Kidderminster defender. The main talking point in the half was the five yellow cards shown by the referee.  Was there a bad tackle anywhere?  No, but he fell into the trap of booking one player so early on that any similar tackle had to result in a booking.  Shame really as it spoilt an attacking half. Oh, I forgot to mention that one the way I heard a cringeworthy advert on the radio on the way up.  “A right old cockney knees up” can be had by all on Monday night at Upton Park for the game versus Burnley.  For ONLY £49 you get a pie and mash supper, a pint, a programme, a padded seat and “much much more”…well based on the fact a ticket is £15, a programme £3.50, a pint the same and pie and mash is lets say a £5 it must be more than £23 worth of “much more”.  Desperate measures from an increasingly desperate club.  Back to the Blue Square Bet Premier… 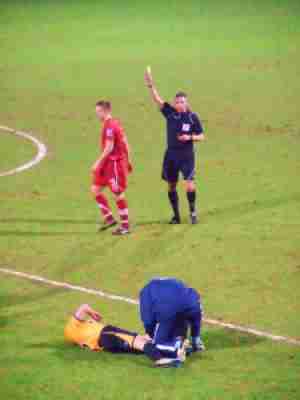 How’s your luck! Five minutes in, Cambridge break and Kidderminster full back Vaughan who has already been booked hacks down the Cambridge forward.  The referee calls him over, and it appears he is going to get a second yellow.  Harriers captain Briggs protests, the referee sees the linesman’s flag up for offside and so cannot book Vaughan for the tackle but books Briggs instead for his protest! The game ebbed and flowed after that.  Both team had chances and with the last throw of the dice Cambridge used up their substitutes.  With the first minute of injury time played Adam Marriott looked to have rescued a point for the home side as he scored from a free kick some 25 yards out.  But when the luck isn’t with you, it really isn’t with you and two minutes later Kidderminster’s substitute Jamille Matt headed home the winner from Matty Blair’s excellent cross. The defeat meant that Cambridge had now gone eight games without a win and slid further down the table, whilst three points game the Harriers a vital boost upwards towards the playoffs. The roadtrip was well underway…next stop Glapwell, or so we thought! More pictures from the evening can be found at our Flickr stream here.
Share
Tweet
Share
Pins
Share
Like

Draxler puts an end to speculation linking him to Arsenal

PSG midfielder Julian Draxler has put an end to speculation linking him with a move to Arsenal in January, Marca reports (via  ESPN). The 24-year-old, who signed for PSG i...