For he’s a Jolly good fellow

Share
Tweet
Share
Pins
Share
Like
Over Christmas we finally managed to get a game in after the weather decimated the fixture programme.  The one game we managed to get to was the local derby between Carshalton Athletic and Sutton United.  This wasn’t just a game of local pride, nor was it the chance for the home team to get one over on the league leaders, but it was also the first return to Colston Avenue for a previous legend for the Robins – striker Richard Jolly. Jolly is a bit of a superstar in the non-leagues and few people who I have spoken to have a bad word against him.  Wherever he has gone, he has been prolific in terms of his scoring.  He won the golden boot (for the second time in just three seasons) with Carshalton Athletic just two seasons ago, and openly said he wanted to move on in the summer to try and win the league with Sutton United.  As 2010 became 2011 his decision looked vindicated as his goals had helped Sutton open up a decent lead in the Ryman Premier League. However, a week is a long time in football, let alone the three it was between seeing Mr Jolly and then catching up with him as in mid-January he rejoined Ryman League rivals Wealdstone on loan.  We caught up with him on the trip across town to his new club. Do you class yourself as a Professional footballer?  What else do you do? No I don’t. I work in the Pensions Industry for the Local Government Pension Scheme. Very far removed from being a pro footballer! It is rare to see such a prolific striker in the non-leagues who is not built like a brick shithouse.  What is the secret to your success? A good meal and a bottle or two of wine on a Friday night! I think I score a lot of my goals from being one step ahead of the defenders in and around the box and always being on the move. I enjoy playing football and being relaxed plays a big part. Sometimes you can try too hard and you don’t do the things that come naturally. 31 goals in 2008/09 won you the Ryman Golden Boot.  Did you think some bigger clubs may have come sniffing around Colston Avenue? 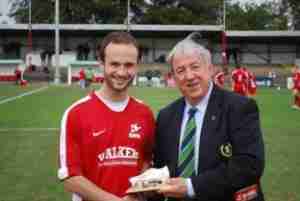 There were a few clubs who contacted me but the money that was on offer wasn’t enough to be worthwhile and to give up my day job. Some pro clubs feel they can offer a low package because they are giving you a chance of becoming a pro. I wasn’t willing to give up the career I had created for myself just for the off chance of a few years of being a pro footballer. Any particular teams that you always struggle against? Not really. I never really look at who I score or don’t score against. Having seen certain Football manager’s siblings be given chance after chance to make it without success at Football League (and Premier League) level, ever wish you would have been born Richard Wenger? No. I wouldn’t want to people to think I was only there because of my Dad, Uncle or Brother. I wouldn’t feel comfortable knowing it was my Dad and not my ability that gave me the opportunity. But I’m sure I’d cope if they was offering me thousands of pounds a week!! Sutton United look good this year but how far in reality can they go with teams like Crawley Town ready (and able?) to spend £300k to bring in a non league player? 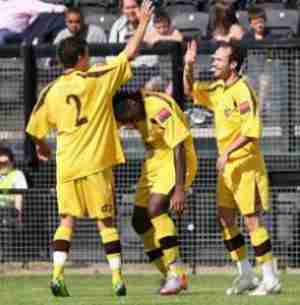 There will always be one or two clubs who have limitless pits of money & it makes the game exciting. Money buys good players but it can’t always get you that team spirit. There is a good group at Sutton with a lot of potential & spirit so who knows how far the team can go. Without agents at the level you are at, how do transfers materialize? A cheeky phone call from a manager or over a beer in the bar after a game! Ever fancied taking the route of other ex-step 3 non league players such as Martyn Lancaster (ex-Northwich Victoria, Leigh RMI and Southport) who is now at Miami FC, and Kenny Pavey (ex-Sittingbourne United) now with AIK Solna in Sweden in playing abroad? I had the possibility of going to America and doing a football scholarship there when I was 16 but in all honesty I was scared to leave home and live in another country at such a young age on my own. When you first started playing, what level did you think you could reach? I thought I had something when I was younger but I was never the best player in any team I played for. I thought if I could nick a professional contract at any club then I would have been happy. How do you motivate yourself to play on a wet winter’s night at Horsham? Strangely I like playing in the cold. It makes me run around more to stay warm. Also I prefer midweek games to Saturday games. There’s something about playing under floodlights that makes a game seem more special and professional. Who would play Richard Jolly in a film about your career? I’d play myself and demand a huge multi million pound pay check from 20th Century Fox so I can buy an island and retire! Every played in front of one man and his dog and thought “What am I doing here?” Yep. One game that sticks in my mind was a Tuesday night game for Heybridge Swifts at home. I scored in the first minute and they played a crowd cheering on the tannoy as there were only about 10 people in the ground by then! Snoods, gloves with short sleeve shirts, music when goals are scored – three things we would banish to Football room 101.  What would you put in there? 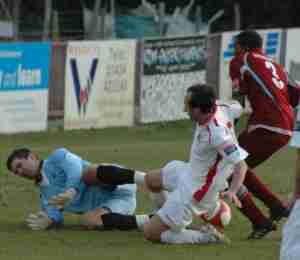 Ice baths. Pre season training. Injuries What team do you support?  Ever had the chance to train or play for them? I support Queens Park Rangers. I used to be a season ticket holder until I was 16 and started playing on Saturdays. I never wanted to play for them just in case it didn’t go as planned, got sacked and ended up hating the club. Did you know that Caroline Barker from BBC’s Non League Show is a big fan of yours?  Anyone else well known in your phone book? No I didn’t know she even knew of me! I don’t have any well known people in my phone book Sum up Richard Jolly in a 140 character Tweet A man of simple pleasures. Give me family, friends, food and an endless cellar of the worlds finest wines! And a few million quid! And there we go. It’s not that glamorous being a Non League star on a Saturday and then having to go back to work on Monday morning.  But thousands of players like Richard do just that every week.  And without them the world would be a much duller place.  So for adding some enjoyment into our lives, Richard I thank you!
Share
Tweet
Share
Pins
Share
Like

About the Kingfield StadiumThe ground has an impressive and fairly new single tiered stand situated at one end of the ground. This stand, the Bellway Homes Stand, towers above the rest of...