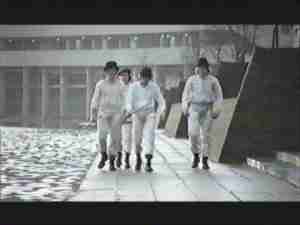 The word Thamesmead normally drives fear into the heart of South East Londoners.  The town was seen as innovative when it was constructed in the late Sixties on the old Royal Arsenal site by the GLC.  Flooding had been an issue in the area so the initial developments were built so that the flats were on the first floor and linked by a series of walkways and bridges.  Sounds idyllic right?  Well not quite.  Mismanagement of the whole project that initially was planned for 100,000 was rife from the start. Promised transport links never materialised (even today with 50,000 residents there is not train station), instead replaces by a dual carriageway that dissects the development, a sewage works and of course Belmarsh high security prison. To me the word Thamesmead means five things. 1. It was used by Stanley Kubrick to represent the desolate and lawless future in his classic film A Clockwork Orange. 2. It was supposed to be the starting/ending point of the third London river crossing, and a ground breaking ceremony was arranged.  Unfortunately today commuters still have to suffer the daily queues at the Dartford and Blackwall Tunnels. 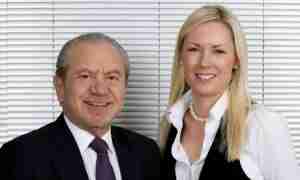 3. Thamesmead was exposed by the BBC in 2009 as the “fraud capital of England”. 4. 2010 The Apprentice winner Stella English was born and grew up in Thamesmead. 5. Andy “The Viking Fordham, once BDO Darts World Champion has a pub, The Cutty Sark, there. But we are not here to discuss more trifling matters of society.  Today is all about football.  Football and Thamesmead are hardly two words that people fit together naturally, but I think that soon they will. At last – 200 words in and I can stop my social lecture and start talking about football.  Thamesmead Town are currently in their third season in the Ryman League North, having been promoted in 2008 from the Kent League.  What is remarkable is that the club have simply continued to grow year in year out, and it can only be a matter of time before they end up in the Isthmian Premier League. The club made their debut in the Isthmian League Division 1 North in 2008/09 with great anticipation, but also trepidation. It turned out to be a long season, which took time for the team to adjust to losing games by just the odd goal, it was a steep learning curve in season where the club avoided relegation and which was followed behind the scenes by BBC London in their fly on the wall documentary, “The Gaffa”. However, in 2009/10, the first team consolidated their Isthmian League Division 1 North status finishing the season in the highest position in the clubs history, in 7th place, just outside the play off positions. 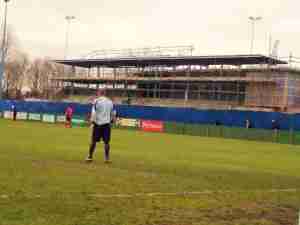 Coming into the Christmas period the club were again in 7th place.  As with most clubs at this level, December was a terrible month with just one game being playable meaning not only a potential fixture pile up but also a loss of revenue from a lack of match day activities. With so much money being invested into the Bayliss Avenue ground, it has been a crippling time for the club.  Building work on the new stand and club house had been delayed due to issues with the builders, rendering the club’s car park more like the Hippo enclosure at London Zoo. So, New Year, new weather?   Absolutely, so we made to short hop across from SE9 for the game against the Motormen of Redbridge.  As the crow flies this was the second closest ground at this level or above to TBIR towers (Welling United being the closest) so it was quite amazing that we had not yet made the trip to see the Mead.  It would also be a chance to meet their coach “Baldy1974” aka Hugo Langton who loves his banter and doses of realism via his twitter feed. Thamesmead Town 0 Redbridge 2 – Bayliss Avenue – Monday 3rd January 2011 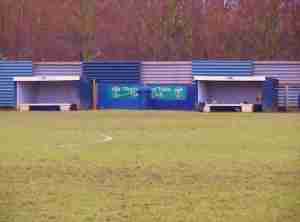 Thamesmead has certainly changed over the past few years.  Smart new houses had gone up on the land around the outside of the “town” and driving down to the ground you could see that at last the authorities were putting in some infrastructure for the residents.   After negotiating the mud bath car park, we went into the cavernous club house for a swift half.  This was possibly the most unusual room we had seen.  It was essentially a bar, but on one side were doors marked “home”, “away” and “referee”.  Players and coaches kept popping in and out, tempted by the smell of beer and bacon rolls. The ground will be dominated by the new stand and club house when it is finally finished.  For now the “main stand” is a five row temporary structure behind the north goal, with just standing around a barrier for the rest of the ground. 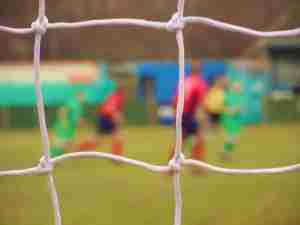 With the A206 passing almost overhead to the south, and planes coming into land at City Airport it was refreshing to see  both teams keeping the ball on the muddy ground.  Thamesmead would have fancied themselves for the win in this one, but in a cagey first half it was Redbridge who created the best  chance when Hyun-Jin Lee pulled his shot across the goal when put through near the end of the half.  Lee was lucky to be still on the pitch after appearing to stamp on a Thamesmead player right in front of the bespectacled “Assistant” referee, who of course didn’t see it. During the first period we saw the return of the snow, albeit quite light but enough to have fixture secretaries crying into their beer with the prospect of more games to re-arrange.  It is bad enough as it is that at this level clubs will be expected cram in two or three games a week, simply to adhere to the League’s rules about when the season has to finish.  Flexibility is not a word in their vocabulary. 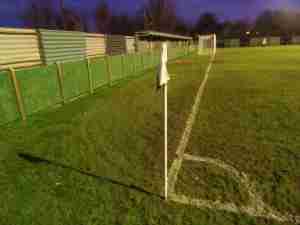 We ventured back into the warmth of the bar at half time, and caught up on events down at The Dripping Pan where Lewes were losing 3-1.  Amazingly enough, as perceptive Lolly pointed out, Lewes could be visiting Thamesmead in a league game in just eight months based on current form.  Three seasons ago the Rooks were heading for the Blue Square Premier, whilst Thamesmead were still in the Kent League.  Football is a cruel game sometimes. The second half was already under way by the time we headed back out of the warm bar.  Whilst both teams were committed in midfield, spread the ball wide when they could, and looked assured at the back, there was few chances going begging.  If I could get bloody T-Mobile to actually work then I would have had a bet on 0-0 there and then.  Lolly, bless her, after her 30 minute queue in the pouring rain on Saturday for chips, was not on tip top form and so being a great Dad (I was accused otherwise on Saturday for letting her queue up whilst I was in the dry and warm bar) I suggested she went back to the warm bar.  Just as I came back into the ground Redbridge took the lead as Hyun-Jin Lee powered the ball home after Thamesmead had failed to clear the ball into the penalty area. 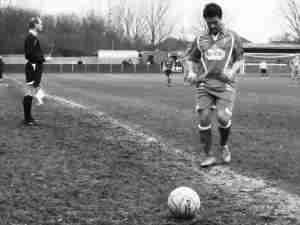 One became two a few minutes later, although I really cannot tell you what happened.  In a game where the attendance looked less than 100 one of the 2 or 3 people actually taller than me decided to stand in front of me.  Apparently the ball went over the line, although the home team appealed for a foul on the keeper, who lay prostrate on the floor.  When I asked the chap in front of me what happened, he told me he had no idea as he was on the phone.  Thanks for that! Thamesmead threw the ball forward in a more direct style in the dying minutes but the Redbridge keeper, Nathan Fletcher, was rarely called into action.  For a game that was played at such a pace, and along the floor with tackles flying in from all sides it was amazing that the referee did not have to reach into his pocket at all.  Full time brought some big cheers from the Motormen, and some long hard looks into the ground from the Thamesmead.  Whilst they have games in hand, they would have expected to have beaten Redbridge and pushed themselves into the play off spots. 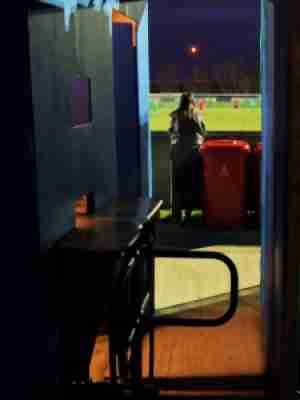 After the game we caught up with Hugo to talk about all things Non League football. Here is a man who lives and breaths football.  Every name I dropped into the conversation he seemed to know.  I would hate to see his phone bill at the end of the month, but without men like Hugo there would be no football at this level. We could have chatted for ages about football but we had to get back to TBIR towers.  But don’t fret dear readers, we will be back to see and chat to Hugo soon as part of our “Unsung Heroes of Football” series. So a chilly January afternoon in SE28 brought to an end our Christmas treble of games.  From Carshalton to Thamesmead, via Copenhagen and Gravesend it had been an eventful few days.  But would we do it all again?  Hell yes!  Bring on the Easter extravaganza! More pictures from the afternoon in Thamesmead can be found at our Flickr stream here.
Share
Tweet
Share
Pins
Share
Like

When the Drip became a Torrent (Pan)

We like things continental style in the Fuller household, celebrating Christmas with a huge family feast on the 24th rather than the 25th December. Over a glass or two of port, my Dad sta...