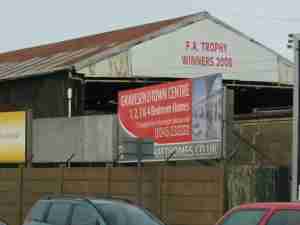 As a young chap growing up in Gravesend there was little in the way to get excited about apart from a friday night fight in Kenneth Chows and a quick grope outside The Royal Victoria Shades.  However that all changed in 1992 when Gravesend & Northfleet FC signed a young chap called Steve Portway from Barking who had scored 36 the previous year. The club had just dropped back into the Southern League.  Expectations weren’t exactly high but Portway broke every scoring record both for the club, and for the division as he netted 61 times!  In one game versus Bury Town Portway netted six times in a 7-2 win.  This was even more amazing considering that Portway also held down a full time job with Nat West Bank. Despite his goals Gravesend finished 4th in the league, thus missing out on promotion.  However, the following year they went on to take the Beazer Homes League title.  Portway went onto score 152 goals in four seasons for the club – at average of nearly 35 per season. At the age of 42 most footballers have long called it a day. The namby pamby professionals of today will tell you that the reason they need to earn £150k per week is that it is a short career “‘innit” and they have to think about what they want to do when they retire. Most players never work their way down the leagues, essentially playing for the love of the game. Instead they demand a testimonial and ride off into the Sandbanks sunset, making the occasional appearance on TV as a “studio expert” at a random game, showing the footballing world that they actually have no value to add as well as their poor dress sense. Players who have spent their careers in the non leagues tend to stick around a bit longer. Football at this level is predominantly a part time career and so they do not put their bodies through training every day which whilst is beneficial at the time, takes its toll in the longer term. They also have their own jobs, ones which in some cases stop them ever going the whole hog and becoming professional.

Many people remember the urban myths in this respect about Steve. The striker was coming off another fantastic goal scoring season when Charlton Athletic came calling. What actually happened has never been understood by the fans of both clubs so we took it upon ourselves to track down Steve and ask him about his career, and the Charlton Athletic story. We were eventually passed his number after a plea on the Steve Portway Appreciation Society Facebook pageand we gave him a call. Firstly it has to be said that we rarely speak to people who talk with such passion about the game. We only had fifteen minutes before we had to fly back to London but Steve filled that and probably could have continued for another hour. This is a man who still simply loves the game. So Steve. Let start with your time at Gravesend & Northfleet. You were, to say it lightly, a goal machine. What was so special about the team? We had an incredibly attacking team. Most weeks we played 4-2-4 with two wingers including Peter Coffill who could drop a ball on a sixpence and up front alongside me was Mickey Cotter. Mickey did all the hard work, rarely getting the credit he deserved. My job wasn’t all about scoring but it was the bit I will always be remembered for. Why do you think you scored so many goals during those few seasons then? Well apart from the support I had all around me I suppose it was a case of being in the right place at the right time. From a young age I developed a sense of anticipation. I tried to read defenders and goalkeepers so that I could second guess them. If I could second guess where a ball may end up or where a defender would try and clear the ball I could get there first and that would give me a better chance of scoring. So, the question everyone wants to ask. Charlton Athletic. What happened? 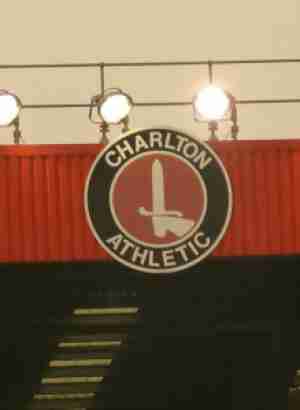 Let me go back a bit first. I was working at NatWest at the time and enjoying my football. I was a big Spurs fan and would have walked over hot coals to play for them. I was aware that a number of clubs were watching me – in fact at one game there were scouts from over 15 clubs including one from Tottenham. I heard they were keen on me so I approached the manager and asked if I could go on trial there. The rules concerning non league contracts allowed us to play two games for another club (the dreaded “trialist” on the teamsheet) and that is what Spurs wanted me to do. However, Gravesend & Northfleet told me that they had other ideas and had actually agreed a fee (believed to be about £20,000) for me. I could see some of their logic in this – relatively local club, may build some bridges between the teams and there could even be a money spinning friendly built into a deal. I went up to Charlton and spent two weeks with them in New Eltham, training with the first team squad and then playing in two reserve games against Palace and Chelsea. I thought I had done OK and on my last day there Keith Peacock called me over and said the Gaffers wanted to see me. I went into the office and sat down with joint managers Alan Curbishley and Steve Gritt. I was in their office for over half an hour but after I heard them say “We want to sign you” I went into a daze. They could have said anything to me and I just nodded along. Play in goal Steve, how about 50pence a week as a wage, wear a silly wig. It didn’t matter. I had just been told by a professional club that they wanted to sign me. Simple as that. It was the stuff of boyhood dreams. I went back home and on the Sunday received a call from Keith Peacock saying they were excited about having me join. Everyone at Charlton was brilliant. However, the Gravesend board had other ideas and now wanted £100,000 for me instead of what had already been agreed. Charlton were slowly rebuilding themselves financially and weren’t prepared to take that sort of risk so the deal was dead. I was heartbroken. My dream was shattered. I found it so difficult to motivate myself to play for the club after that. That must have been a massive kick in the teeth – especially after they also stopped you having a trial at other club. What happened next? Well unsurprisingly it affected my form and the club could see that bridges had been burnt. So they sold me to Gloucester City for £17,500. That is the crazy thing – Charlton Athletic had offered more and the club would have probably done OK out of any spin offs yet here they were selling me to another Non League club for less money. You picked up a really serious injury whilst you was at Gloucester City. How did that impact your career? Yes I badly damaged my eye. In fact I am permanently blind in one eye. But as I said earlier I always worked on anticipation in terms of creating chances and that didn’t change. I continued to score goals for them. So after stints around the Non Leagues are you still playing today?

Yes. I now play for Harold Wood but in their Veterans side. I was playing for their first team up until the end of last season in the Essex Senior League but it was getting a bit too serious. I still play because I love the game. I am 42 now but still get the same thrill when I step on the pitch. And are your still scoring for fun? Haha…well I am still averaging a couple of goals a game, but as time has taken its toll on the knees I have become more of a provider than a scorer. I enjoyed playing in Chelmsford City’s game against the Arsenal XI in the summer and managed to find a burst of pace in the game to score. There is now significantly more money floating around the Non Leagues today. When a small Conference side can afford to pay £275,000 for a striker from another Conference side there must be a pang of jealousy from you that you are not playing at that level today? Too right. Clubs are also a bit more sensible these days. Transfer deals are rarely done upfront. So a £100k deal will be spread over a longer period meaning the risk to an extent is mitigated. Also loan deals are far more common these days. Still I would love to be playing at that level today. Talking of today, what are you up to? Well funny you say that as I am just about to go out and do some coaching! I am a qualified electrician as well as holding my coaching badges so I combine the two. I coach almost every day and still absolutely love it. Have you never been tempted to go into management? I’ve got a young family – three boys with the oldest just in his teens and I enjoy spending time with them so management wouldn’t really fit into that at the moment. I help out at the clubs they play for and maybe I will try my hand further up the chain but for now its coaching that takes up my time. Finally, you must have some fantastic memories from your career. What were the high points for you?

There are two that spring to mind. Firstly walking up the steps at the old Wembley Stadium to collect a winners medal with Cheltenham Town in the FA Trophy final. Whilst the new Wembley is one of the best stadiums in the world, the old one had so many memories and as you walked up those steps all you can think of is the famous people who have gone before you to collect their medals. Secondly it is actually a goal. It was for Gravesend against Leyton Orient in the FA Cup in 1993. The ball was sent over from the wing and I was running towards the penalty area. Most players would have tried a volley or controlled it but I threw myself headlong at the ball, connecting perfectly with a diving header that flew into the net. I was pals with the Orient keeper,  and he said to me afterwards that he simply had not expected that and that is why he simply couldn’t save it. Anticipation was the key again! With the final call being made for our flight we had to say thanks to Steve and head off. He signed off our conversation by thanking us for the call “Its nice to reminisce once in a while”. I have a feeling that Steve has a million and one stories that would be of interest. But they will be for another day. Steve Portway, we raise a glass of Tuborg Christmas Ale in your direction as a true Non League Legend!
Share
Tweet
Share
Pins
Share
Like