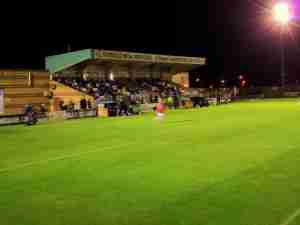 Now here was a turn up for the books.  Me, in London, on a Tuesday?  Well too bloomin’ right.  And lo and behold not just one game this week, but TWO!  First up was a trip up the M11 to watch the mighty Rooks trying to extend their 3 match unbeaten run under Tim O’Shea at Bishop’s Stortford and then just 24 hours later I was making my long heralded return to Upton Park to see Giggles Grant’s team take on West Brom. Confidence was obviously high in the Rooks camp after their biggest, in fact, only away win of the season at Weston-super-Mare on Saturday.  The team had discovered a hard belly, being prepared to fight to the death for their points.  Exactly what the team had lacked in previous seasons, but a little over the top after mass brawls against Bromley, Dartford and Weston had resulted in two red cards and countless bookings. Fixtures sometimes seem to conspire against teams, and after the longest away trip of the season to Weston on Saturday, Lewes headed north up the M11 for the 3rd longest road trip just 72 hours later.  Despite it being a cold and wet Tuesday night, the number of Rooks who arrived at Woodside Park was surprisingly high.  Of course the board were well represented with Mr Marber, Mr Williams, Mr Leith and Mr Dobres all wearing their colours and joining the dozen or so hard core regulars – well they could hardly all fit into Stortford’s compact and bejous boardroom at the same time. A quick turn around at TBIR towers, and a dream journey saw me pull up in the car park in Woodside Park less than an hour later.  I headed into the bar and found the Lewes Lunatic Fringe propping up the bar along with Chairman Ibbo, complete with his mysterious Chairman’s bag (similar to Danny Last’s Non League Bag but with added cigars and fine wine). Bishop’s Stortford 1 Lewes 0 – Woodside Park – Tuesday 9th November 2010 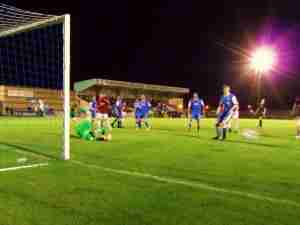 Last season when Lewes came to the furthest corner of Hertfordshire the home fans generated some real noise and passion.  Bash the Bishop, a member of the clergy who had a big drum and wasn’t afraid to use it, generated some real noise for the “Blue Brazil” but it was sadly lacking tonight.  A quick count of the crowd saw varying numbers close but ultimately under 200 (later “official” figures suggested it was 268 although I am sure you cannot count the players as part of the crowd) which was very disappointing.  The draw of Lewes at home on a Tuesday night in November obviously didn’t match an evening of Australian Masterchef – what is wrong with people today. The Lewes players looked fit.  Not in a FHM Swimwear special way but in an energetic way.  They used the ball well, with Murphy in his fancy dan boots providing some tricks down the left.  And it was the youngster who came closest to opening the scoring when his well struck free kick hit the foot of the post and rebounded too quickly for Hutchinson to take advantage of, before Hutchinson then saw his header well saved by the Stortford keeper. 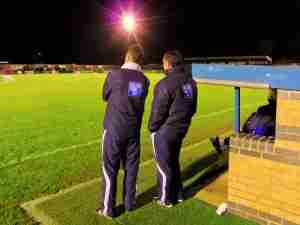 The response from the LLF was a Marber inspired rendition of “We are Community, I’ve got all my members with me” to the tune of We are Family, although the take up rate was rather muted.  Seconds left in the half and a rare slip in the Lewes defence saw a Stortford forward through on goal.  Winterton tried to push him wide but clearly took him out.  With the home crowd baying for a red it was with relief (and some laughter) that the referee produced a yellow for the keeper.  And of course just to rub salt in the Stortford wounds, he proceeded to save the resulting penalty. The second half was a battle of attrition with both teams flirting around the edge of the area.  Lewes’s new secret weapon, the “Rory Delap” throw in of Porter caused a few problems but not enough to really worry the Stortford keeper.  Twenty odd minutes to go and a rare mix up in the Lewes defence saw Hutchinson dawdle, Winterton hesitate and Stortford’s Duane Jackson pounce to score the only goal of the game. Defeat is not a word in O’Shea’s vocabulary at Lewes and so there would be no beer stops on the way home tonight, which meant that Deaks and Dave had no intention of travelling back on the team coach, opting for Fuller taxi’s back to Bromley.
Share
Tweet
Share
Pins
Share
Like

Former Arsenal striker Ian Wright has suggested that it would be better for Alexis Sanchez to leave Arsenal following the Gunners' failure to challenge for trophies, BBC reports. Wright,...