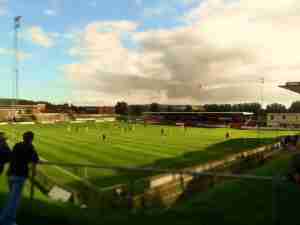 It’s old hat now talking about the fact I used to be a West Ham season ticket holder, and how I fell out of love with the club due to the change in owners, and the direction they were taking the club.  No?  Well refresh your mind here.  And it is no secret that I have decided to share my overflowing cup of football affection with Lewes FC..no?  Well just read back over the past few weeks and you will see why. But strangely enough both teams seasons have run in almost complete parallel.  Lots of player injuries, although David Wheeler’s stomach parasite is much more interesting than Carlton Cole’s groin I am sure (to most fans anyway), new owners trying to win over fans (again, I prefer the Lewes under 16’s go free approach to the West Ham £36 for a kids ticket to watch them lose to Chelsea) and a surprising  run in the cup for both.  But it is the league position that is the greatest cause for joint concern.  Coming into this weekend’s games both West Ham and Lewes were rock bottom of their respective leagues.  And to add more spice to the next game, both were playing the teams second to bottom.  West Ham travelled to Wolverhampton Wanderers whilst Lewes entertained Dorchester Town. 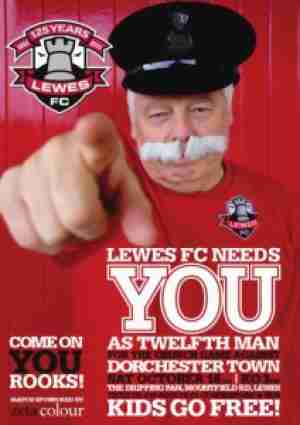 So guess which game I was going to?  I still haven’t returned to West Ham this season, although I will admit I have already paid my £80 for a ticket for the games versus West Brom and Blackpool in a few weeks time.  But for now Lewes needed my support so I was making the 130 mile round trip to pay them my £10 and enjoy football the old fashion way (beer on the terraces, a chat with a Hollywood celebrity or two and having a chat with the manager after the game in the bar). This week Charlie Anderson wrote on Twitter that “The sheer amount of media coverage Lewes FC get is illogical”.…then followed it up with “But if it is written by The Ball is Round who cares?” Never a true word spoken I think so instead of having an extra pint of Harveys I picked up my pen and jotted a few observations from “Demotion Destiny Day”. Lewes o Dorchester Town 2- The Dripping Pan – Saturday 16th October In this fixture last season Lewes desperately needed a win.  With just three games to go, and still sitting in the bottom three, The Rooks needed to beat a Dorchester team who were technically safe from the drop.  And did they just do that.  Their biggest win for over two years saw them rise out of the bottom three….so what chance a repeat performance today? 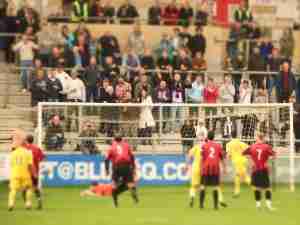 Err.none actually.  The high point of the afternoon was the continued progress in the Rooks Inn where Danny had started on our European wall, but that was soon forgotten as Lewes couldn’t make the most of their early pressure that saw Tom Murphy hit a post.  Halfway through the first half with the news filtering through that West Ham were losing at Wolves, Lewes gave away a needless penalty when Scott Manning tripped up Guiseppe Sole, and the Dorchester man picked himself up and dispatched the ball into the corner to send the 8 away fans into ecstatic rhapsody. Injuries have been a major issue for Lewes this season, with every major player suffering at some point bar keeper Winterton.  For this game the treatment room included TBIR’s own David Wheeler, Simon Wormull, Lewis Hamilton and Chris Breach and this bad luck seemed to seep onto the pitch. 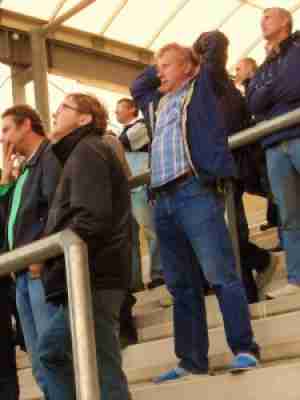 The rest of the half passed most fans by, as did most of the passing.  An invite into the boardroom at half time lifted our spirits but in truth most fans realised based on that half that this was going to be a long season’s fight against relegation.  With a sausage roll in my pocket I headed back onto the terraces, narrowly avoiding the latest clutch of celebs to visit the Pan (Mark “Arthur Weasley” Williams and Dave “Come Dine with Me” Lamb) just in time to hear that West Ham had equalised at Wolves.  So there was hope after all! Alas it was not to be.  Dorchester kept the door shut, despite constant “fattist” abuse being rained down on their slim keeper (thank God I wasn’t out there – I would have been an easy target) and created a final chance in the last minute when just announced Man of The Match Pullen allowed Danny Igs to lob the ball over his head and follow up with a neat finish. The goal was the signal for most of the crowd to filter out.  Frustration was the key word here. Progress is evident off the pitch but on it the team need a run of luck.  The attendance was down by a few hundred on last week’s cup exploits but still higher than the same stage last season, in most part due to the initiatives undertaken by the club (and of course our European Football inspired Rook Inn).  With a trip to Cambridge United next week in the FA Cup to look forward to it is hard to see where the inspiration will come from. 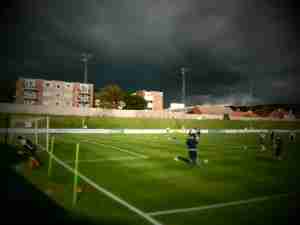 But football is a funny game and there is always hope.  Last season the club were all but relegated with a month to go before pulling out 3 wins from the final 4 games to avoid the drop and with the likes of Wheeler and Wormull back in the side things will improve. Thirty minutes after the final whistle and there was still no sign of the home players.  Dorchester Town’s squad were digging into seconds of their post match meal unaware that their extra portions were actually for the home team, but for once perhaps the victors did deserve all the spoils. More photos from the day can be found at our Flickr stream here.
Share
Tweet
Share
Pins
Share
Like

Liverpool is a celebrated club with long and illustrious history. Its popularity first skyrocketed when they dominated football in the 70s. It has continued to do so today. But who were ...