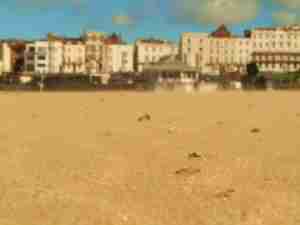 “Well I’ve been working hard to reach me target To earn a few bob for a day trip down to Margate I’m gonna blow the lot tomorrow on all me family We catch the coach at eight so don’t be late, were off to see the sea” Margate – so many memories for the TBIR team.  Many a summer we jumped on the train from our north Kent home, and spent the hour or so journey getting on and off the train to avoid the conductor.  In the olden  days trains used to be in “toast rack” carriages – compartments that could only be entered and exited from the outside and thus no ticket inspector could get you unless they got in at a station, so we simply looked out of the window, jumping into the next carriage when we saw him coming. “Along the promenade we spend some money And we find a spot on the beach that’s simply sunny The kids will all enjoy themselves digging up the sand, collecting stones and winkle shells to take back home to Nan” 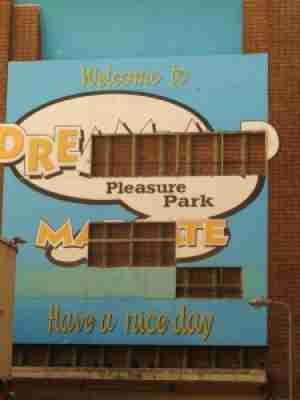 In the mid 1980’s Margate was all about Bembom Brothers White Knuckle Theme Park aka Dreamland.  These were the days when Chessington was simply a zoo, Thorpe Park was a farm and Alton Towers was the derelict stately home of the Earl of Shrewsbury.  It was THE premier attraction in the UK, and in 1981 the Looping Star rollercoaster opened, sending the park into meltdown.  Add in the BBC Radio 1 Roadshow and you could not get a better day out (especially with a Watney’s Party 7 and 10 Marlboro’s for the journey down). “Down to Margate, don’t forget your buckets and spades and cossies and all Down to Margate, we’ll have a pill of jellied eels at the cockle stall Down to Margate, we’ll go on the pier and we’ll have a beer aside of the sea You can keep the Costa Brava and all that palava, going no farther, me I’d rather have me a day down Margate with all me family” How times have changed.  Today the amusement park is closed, with all of the rides now dispersed across the corners of the UK.  The Looping Star can be found today in the Loudoun Castle Theme Park in Scotland, but there are plans to transform the site into a heritage site – a theme park for classic rides that other parks no longer want – a sort of Battersea Dogs Home for rollercoasters.  Already in place is the Scenic Railway, the UK’s 2nd oldest wooden rollercoaster that was first opened in the park in 1919 (and a replica of the one found on Coney Island in New York).  The park is still a few years (and a few thousand pounds in donations) away from opening but when it does it will be a real trip down memory lane. 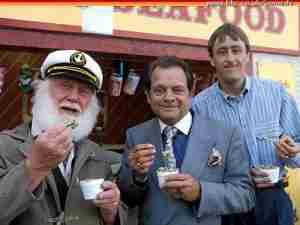 But we weren’t coming down to Margate on a Jolly Boys Outing as Del and Rodney had done in the classic 1989 Only Fools and Horses Christmas special.  We were here to experience the magic of the FA Cup with a club who have an amazing cup history.  It is rare to find a Non league team feature as heavily in the FA Cup stories as Margate but they have written themselves into the record books in more than one way. 20th November 1971 will be a day that Margate will choose to forget from their history, but it is one of those that they will always hope they don’t.  Margate came to visit Dean Court in the first round of the FA Cup.  Margate were a Southern League team and had done well to reach the first round.  Third division Bournemouth were having a mixed season but over the next 90 minutes they banished all of those worries, scoring ELEVEN times, with Ted McDougall (later to play for West Ham and Manchester United) scoring a English record 9 goals. Fourteen months later the club had fought their way to the 3rd round, beating Swansea City and then Walton & Hersham to set up a game with then UEFA Cup holders Tottenham Hotspur at Hartsdown Park.  The club was the real winner on the day despite the 6-0 reverse as over 14,000 crammed into the ground to see the North Londoners turn on the style in a 6-0 win. 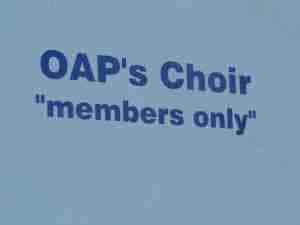 The Southern League side continued to plod along before some bright spark decided to rename the team Thanet United, looking at a Robert Maxwell-esque idea of creating a “super club” from Ramsgate, Herne Bay and Whistable Town.  No doubt Inter would have sat up at this point, with world domination the next step.  After all, Milan couldn’t boast a rollercoaster like the Looping Star!  The idea died a death a few years later and the club found the Margate FC name in the lost property bin of Dreamland. The FA Cup heritage continued in the 1990’s as the club welcomed Kevin Keegan, Ray Wilkins, Mohammed Al-Fayed and even Sky TV for a first round game with Fulham.  A 2-1 defeat was as close as the score suggested and the word Margate was again on the lips of the footballing nation.  All seemed to be going in the right direction for the club, and at the start of the 2001 season the club kicked off in the Nationwide Conference – the highest level they had played at. At the end of the season they finished 8th, just a few points off a play off place.  Could they make that next step?  Well not without significant work for Hartsdown Park so the club moved down the coast to share with Dover Athletic’s Crabble Ground.  The FA Cup again provided the highlight with a win in the first round against Leyton Orient before a 3-1 defeat at “home” to a strong Cardiff City.

However, the Conference were getting impatient with the lack of development at Hartsdown, and after the club missed the deadline for completion, they were relegated from the league despite finishing in 16th.  The club appeared to be in free fall and the following season, this time sharing with Ashford Town saw them relegated again into the Isthmian Premier League where they have remained ever since. A few famous names have been in the managerial hot seat, trying to lift the club back up.  Gabby Logan’s Dad, Terry Yorath (amazing she is now probably more famous in football than her Dad who won the lot in Revie’s Leeds team) and Neville Southall have had a go with no success. So what of the club now?  Well this season they have started well.  Sitting just outside the playoff spots with a game in hand has given the fans something to cheer about, especially as coming into this game the club had been on a run of four wins.  The visitors, Kingstonian had come so club to winning the Rymans League play off at the end of last season, losing out in a dark day for football at Boreham Wood. 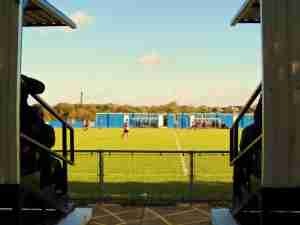 We weren’t going to be on our ow.  Our host with the most was Jeremy Jacobs, “Mr Margate FC” .  Not to be confused by his namesake who owns the Boston Bruins Ice Hockey team and ranked as the world’s 476th richest man (according to Forbes).  No, we were meeting up with public speaker, event presenter and general all round top chap.  The man everyone was talking about in the build up to the game wasn’t only Margator, the excellently named mascot but Sierra Leone International Foday Ishmail Kamara, a man who was going to be in the view finder, snapping away at the Kingstonian players and hoping to expose his talent to us (do you see what I am doing there?)…anyway let’s move on! Margate 1 Kingstonian 1 – Hartsdown Park – Saturday 25th September Time alters memories and so when I pulled up in a parking space on the seafront I was saddened to see the decay in what was once a prime location.  The once famous buildings were now either boarded up or looked like they should be.  However, the beach was still as inviting as ever, and on a sunny day it would have been a crime not to have a little walk on the sand.  That was until I saw a sign advising me “not to play near the pipe at the end of the pier”…well at least they are honest! 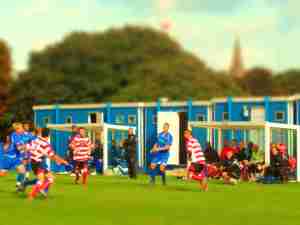 One portion of excellent fish and chips later and I was on my way to Hartsdown Park.  It was sure to be a good day when a parking space literally outside the turnstiles opened up and I slotted in.  Literally seconds later I was through the magic door and within seconds in the bar with a pint of Tuborg, eating a hot dog and watching the Man City game.  A real home from home. Hartsdown Park is in the middle of a major redevelopment.  Well, in terms of work and not time.  Two sides of the ground have been cleared, and there are plans almost in place to build a hotel and a new stand that will augment the small temporary structures.  The dressing rooms were brightly painted blue portakabins on the edge of the pitch.  So that begs the question – if you are sent off then can you just watch the game from the doorway of the portakabin and thus get a better view than the dugouts? The oldest part of the ground is the structure at the Hartsdown Road end of the ground.  A decent bar, the club shop and a covered terrace provided the right acoustics for the crowd to actually make a decent noise for once.  In fact the 400+ crowd generated more atmosphere than I have heard at many a Premier League game. 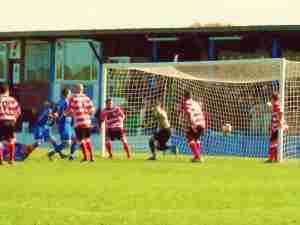 Both teams started cautiously.  They had met a few weeks ago with Kingstonian winning 1-0 and the visitors defensive approach seemed to suggest that they would be happy for a draw.  Margate grew in confidence during the first twenty minutes and when Welford headed narrowly wide you could sense a goal coming.  I think I have a sixth sense in terms of predicting these things and so when a corner was floated in I was camera poised to capture Pinnock diverting a Robinson flick into the net.  Such events always fill me with pride and in the process of showing off my fine work to the fans around me I missed Kingstonian going up the other end and equalising.  Bugger. Cup games featuring teams who are occupying the same league space are rarely edge of the seat stuff, and this was no exception.  There was a temptation from Damon and myself to star in the bar, watching Jeff Stelling but we are professionals and had a job to do so we took up our spot on the terrace (careful not to use foul and abuse langauge which may lead to ejection if you have already been warned). 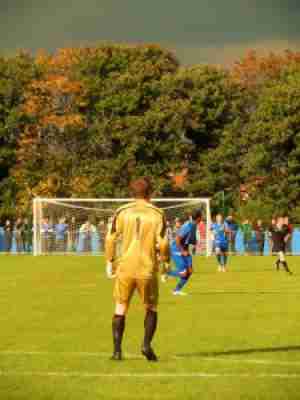 Margate continued to push for a winner and they thought that had it on 87 minutes when Cloke turned in a cross but the linesman’s flag was already in the air.  Kingstonian then had a chance of their own when Dali had his moment of Salvadoration in hitting a fantastic shot from the edge of the box which struck the crossbar and bounce to safety. So the teams will have to do it all again on Monday to decide who moves one step closer to Wembley.  Our trip down memory lane had just made us sad.  Oh to be able to go back to that beach in 1984 with my bottle of Diamond White, my 10 Marlboro reds and a girl on each arm listening to Bruno Brooks.  Hmm, on second thoughts I’ll stick with a curry and Skins on DVD. More photos from our day out at the seaside can be found at our Flickr stream here.
Share
Tweet
Share
Pins
Share
Like