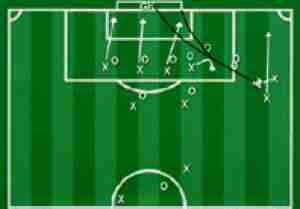 After a weekend of FA Cup excess I returned to the office on Monday, looking forward to my next game, the class of the titans in the Swedish Allsvenskan when 1st place Malmo were due to take on 2nd placed Helsingborgs.  Whilst I love my non league games, and all of the quirkiness that comes with it I do enjoy returning to a packed stadium full of atmosphere (you can see why I stopped going to West Ham now!).  At 11.30am I had a routine email from Mr Boyes informing me that Lewes had been drawn at home in the FA Cup 2nd Qualifying round to Bethnal Green United or Harlow Town who had drawn 1-1 on Saturday. Now I knew that because I noticed that this was the only replay in London and the South East from the crop of games played on Saturday which was in itself unusual.  For a few seconds I contemplated going to the game as it was so close to home but thought a third game in as many days, coupled with my weekly trip to Scandinavia may result in a straight red from CMF and a subsequent ban from the “bottom draw”.  And of course this particular Monday saw the long long awaited return of the Inbetweeners on E4. But then my life turned upside down.  A simple email from Mr Marber.  “Could I just pop along to the game and take a few notes?”.  Of course I could.  He said an email would follow from Ibbo (The Lewes Manager) with what was required, and he kindly sent a “get out of jail free” email for CMF that read:- “Dear CMF.  It is not your husband’s fault that he has to go to football.  The Club Board insist that he goes.  He has no choice in the matter.  He didn’t want to go to a football match on such an important night but circumstances commanded it” She couldn’t refuse, and with a promise of some petrol station flowers, my pink note was duly signed.  I then got my instructions from Ibbo.  So much for “a few notes”.  He even sent me a template to fill in.  Of course not knowing who we could play I would have to complete one for each team until it became obvious who the winner would be.  Some of the things he wanted were:- This was on top of a breakdown of strengths and weaknesses for each player plus a comment on their type of play – direct, physical, counter attacking.  And there was me thinking that all of these options in Championship Manager were irrelevant. Bethnal Green United 0 Harlow Town 4 – Mile End Stadium – 13th September 2010 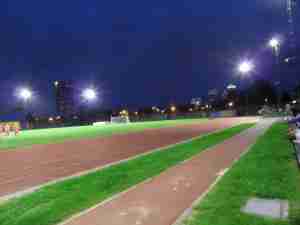 So at 7.30pm I walked into the Mile End Stadium, home of Bethnal Green United.  I put on my special Lewes hoodie to add some authenticity to the night, as well as carrying my clipboard.  Oh how well prepared I was – apart from one item.  My glasses.  I can see well enough on a bright sunny afternoon with a nice elevation in the stands, and the pitch close to the terraces.  But put me at pitch level, at night in an athletics stadium and I struggle a bit.  Well, OK not a bit, a lot. The Mile End stadium is one of the most basic grounds you will see an FA Cup game being played at.  Bethnal Green were playing regional football until a few seasons ago, moving up to the Essex Senior League after only 10 years in their existence.  This is essentially level 5 of the non league pyramid.  Facilities are in keeping with the status of the club.  So it was with some surprise that I entered the ground to find a programme and printed match tickets.  I went in search of a team sheet so I could start preparing my reports but was told there wasn’t one.  Instead a chap from the Essex Senior League wrote the numbers down in my programme – useful if it wasn’t for the fact that he listed visitors Harlow Town with two number 9’s and a number 31. 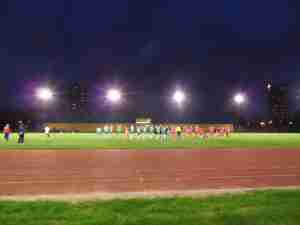 The original game had been Harlow’s for the taking, and it was only a last kick/head of the game that salvaged a draw for Bethnal Green.  The Isthmian League North team had obviously been firm favourites for the game and were probably none too happy to have to replay the game. The game kicked off and I furiously started to take notes on both teams, on formations and who was playing who.  With a severely restricted view my eye sight stretched to about half way across the pitch and no more.  Fortunately a night in shining armour arrived, as long time fan of the blog Vinny turned up, shortly followed by his wife (what else would you do on a Monday night in London apart from come to an FA Cup 1st Round Qualifying replay eh?) who helped me on the simple things like shirt numbers. The worst thing that could happen was of course a close game that went to penalties after extra time as I would have to continue to take notes on all 22 players throughout the two hours.  Certainly for the first half an hour it seemed like that would be the case as both teams.  I duly noted the formations and then tried to put shirt numbers against positions, only to realise in Harlow’s case that according to my notes they had 10 men.  I made extensive notes for the corner formation for Bethnal Green, describing their approach of all standing on the corner of the box and running into as the ball was delivered as a Shambolic shotgun tactic, and I described the home team’s as fat Peter Cech simply due to his luminous orange kit. I was under no illusions about the importance of my task with emails flying in from Patrick, James Boyes and even Danny Last over in Spain, reminding me that the accuracy of my report could be worth £4,500 in prize money in the next round, and to “remember Leiston” from the Eastern Counties League who had beaten Lewes two seasons ago when they were a Blue Square Premier club. It was certainly an interesting crowd.  Nearly 200 people squeezed into the old stand and along the side of the pitch and were certainly vocal.  The unusual but easily recognisable smell of cannabis was also a feature of most of the game, perhaps relaxing me more than normal as I soon got into the rhythm of delivering stinging critics on all of the players.  The first goal came just after the half hour mark.  A Harlow corner (big men up from back, man to man marking) was met by Jon Stevenson, not with his head as he initially intended, but with his knee – hmm how do I write that one up? I had imagined half time would be spent with some of the big wigs from other clubs in a room somewhere discussing players and tactics but instead it was spent queuing up to use a vending machine for some cold tea.  I have seen on TV countless times Premier League managers at other clubs “having a look at future opponents” but none of them ever seem to be scribbling furious notes; Capello is always at games yet he just goes to look like a miserable Italian.  Who takes notes for him? The second half started, fortunately with no changes on either side and gave me the opportunity to fill in the other half of the pitch on my sheets.  Harlow had adopted the traditional 1-11 numbering with the defenders using 2,3,4 and 5 but throwing in a spanner with their play maker and central midfielder Danny Cowley wearing number 9.  Bethnal Green, well let’s just say I used the word “fluid” to mask my deficiencies. Fortunately my work got a little easier in the 47th minute when Cowley scored a magnificent free kick from 25 yards right into the top corner of the net.  A box ticked for me for “men to look out for at free kicks I think”.  He then added a third ten minutes later, finishing off a nice move that ran from box to box in just 5 passes (Counter attacking style – tick).  Vinny’s wife Becky provided the commentary as I was hastily scribbling down the defensive formations, trying to find other words for “He hoofs it”. 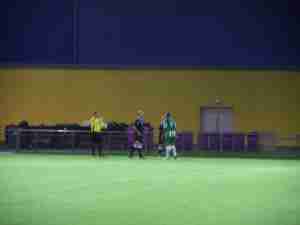 Three nil up and soon playing against ten men, when Bethnal Green’s captain Lee Ryan was sent off for dissent meant I could rip up one of the forms and just concentrate on Harlow for the last fifteen minutes, a fact further underlined by a fourth a minute later when Clark Akers slotted home from just inside the penalty area. But what else could I write?  The full backs “got up and down the line well”, the central midfield “has a good engine on him”, the centre forward Akers “held the ball up well”.  Let’s face it I was out of my depth.  There is a website called Zonal Marking.  It is one of the finest pieces of work known to man, dissecting every game in terms of positional play.  Do you know what I don’t understand a word of it.  I am not cut out to watch a game in such a theoretical way.  To me football games are won on a) luck, b) referees decisions and c) one team being better than the other.  I am sure tactics play a massive part – its just I cannot get how. So a successful evening?  Well I was home in time for Inbetweeners at 10am but from a scouting point of view?  Ask me in two weeks when hopefully Lewes have beaten Harlow Town, are in the draw for the 3rd Qualifying Round and are £4,500 better off.  If not then I can see my new career coming to a premature end.
Share
Tweet
Share
Pins
Share
Like

Why let the pesky weather get in the way of your Christmas?  Well in the case of Lewes FC it doesn’t.  We were all very excited in the extended Fuller household at Christmas to be making ...