Want to know what to do on Saturday afternoons?

Share
Tweet
Share
Pins
Share
Like
There is a saying within the GTC Media offices that a good day out is often ruined by 90 minutes of football. To us a game is not about what goes on, on the pitch but what also goes on off it – and we are not talking about in some 1970’s hooligan action. Far too many fans, brought up with the sanitised Premier League product are more interested in avoiding the queue at the station to even bother to stay to the end of a game. I never understand that. You wouldn’t ever leave the cinema, theatre or even a restaurant early, so why would you like a football match? Football to us involves sampling a few beers with the locals, wandering around the ground chatting to the fans and more often than not having a drink after the game with the players and managers. That is what watching non league football is all about. You are more than just a number on the gate. But are all non league experiences the same? Of course not. Anyone who has sampled a game at the Gateshead International Stadium will be hard pressed to put a romantic spin on the magic of a day out there, but there are literally dozens of teams and venues that make a memorable away day. We have tried to choose five that we would recommend to anyone. A word of explanation first. The five we have chosen below have been through our personal experience and those of the fans we have spoken to. Obviously there are hundreds of clubs out there who could have been included, and I am sure if we review this list in a year or two it will feature a different list of clubs. But for now, our top 5 away days in Non League football are:- Lewes FC – Blue Square Bet South 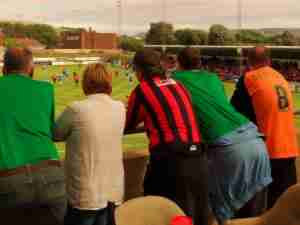 Located around a dozen miles east of Brighton, Lewes has son much going for it as a town that the football used to be incidental. That was until this year when a group of like-minded individuals moved the club from private ownership into a community club. With this move the club has vowed to bring a new era of fan involvement and a few new initiatives, for example offering free entry to children under the age of 16 as well as an Adult season ticket to sit or stand anywhere in the ground for £150. The town is famous for its annual bonfires, its castle, Anne of Cleves house and more importantly, Harvey’s brewery. And where there is a brewery you can be guaranteed a decent number of pubs. And that is exactly what Lewes has to offer. Pubs, pubs and more pubs. And when you have finished in the town centre and wandered down the incredibly steep hill to the brilliantly named Dripping Pan you can have another beer in the Rook Inn, currently a work in progress on a European Fan bar. To really make their day, and to potentially gain a free pint of Harvey’s, bring a scarf of your team along to put up in the bar. And the joy doesn’t end there. You can take your beer out onto the terrace and enjoy what football used to be like back in the 1970’s, but without the flares, the fists and the fuzz.  The ground, supposedly named after the fact that the local Monks used to pan the lake that existed here for minerals was also used for mock sea battles.  It sits in the shadow of the chalky South Downs and has a number of unique features.  What about a steep grass bank that runs the length of the pitch where views are superb, or the “jungle” – the terrace behind the goal where the vocal home fans view the game from?  The team have struggled in recent years, although the steady stream of youth team players brought through by Lewes’s Man of the Year Steve “Ibbo” Ibbitson have on times pulled out some fantastic performances.  For more lovely details of what watching Non League football is all about read here and there. Forest Green Rovers FC – Blue Square Bet Premier 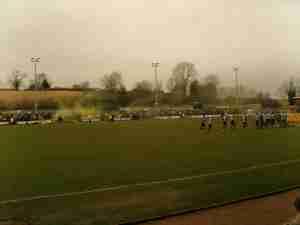 Hands up who really knows where Forest Green is? A couple of you I see. Get a magnifying glass and focus on an area of Gloucestershire above Bath but below Stroud and you will see it just off the A46 – well you will see the village of Nailsworth where you need to take a right (if you are coming from the north) at the roundabout and start climbing the hill, and climbing and climbing until you finally reach Forest Green and the New Lawn. Obviously, by then you will have had a few beers in the village in the fantastic Weighbridge, The Egypt Mill or the Village Inn and think you are Chris Bonnington so the long walk will seem like a walk on a mill pond. Once you are at the ground you will be welcomed with open arms in the supporters bar by the locals and you may even get a glimpse of ex-England wicket keeper Jack Russell who is a season ticket holder at the club. So the game itself may be crap, but looking out from the impressive main stand all you can see is trees and fields, as if football is an imposter in the middle of rural England.  For a more detailed view click here and there. Buxton FC – Northern Premier League Premier Division 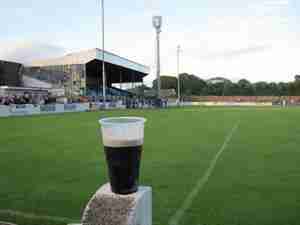 A visit to Buxton FC ticks all of my football watching boxes. Their charismatic Silverlands ground is the highest in the pyramid of football, situated over 1000 feet above sea level. And, it has the lesser seen slopping pitch. Buxton is situated in the Peak District so you can make a weekend of it, and please your wife at the same time. Visiting with the lads only? Then it boats a total of 23 (twenty-three) pubs. Get yourself up to “The Triangle” nearby the stadium for the best of those pubs; Cheshire Cheese, King’s Head and The Swan. You can be assured of the warmest of warm welcomes once you enter the Silverlands as well. Upon my first visit there, former player ‘Bammer’ took me under his wing, and showed me around the place conducting a potted history as we strolled around the ground, and eventually into the clubhouse for an agreeable pint. If you’re looking for a particular match to attend, then hold your nerve. The Bucks biggest game of 2010/11 falls on the very last Saturday of the season. Buxton v Matlock Town is a local derby that’ll have fans flocking to Silverlands. Do yourself a big favour, and get yourself along there. You won’t be disappointed.  Don’t just take our word for it, have a read here. Hampton & Richmond Borough FC – Blue Square Bet South 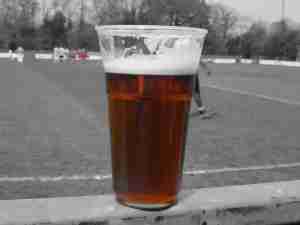 There are so many reasons why every football fan should make an annual pilgrimage to south west London to visit the Beveree. First up it is easy to get to. A five minute walk from Hampton station, and within 25 minutes of the centre of London helps for those coming by public transport. Coming by car? No problems, the M3 and M25 are within ten minutes and parking is plentiful and free around the ground. Fancy a beer then look no further than the The Worlds End, The Railway Bell or the Jolly Coopers all within a few minutes of the ground. Of course you can go into the supporters bar at the ground and mingle with the hospitable home fans or after where for the price of a lemonade you can hear some classic storied told by Hampton manager and ex-West Ham legend Alan Devonshire.  Pick your game and you may also land in the middle of a fancy dress day. The ground itself is another surrounded by trees and has real character. Behind the goal you will find the new Alan Simpson stand, named after the club’s President who wrote Steptoe and Son as well as Hancock’s Half Hour who still attends all games, health permitting. The Beveree is another ground where having a beer on the terraces is actively encouraged and they even have a tuck shop for the kids to spend their money in.  For a view on a typical matchday at The Beveree have a look here and there. Whitley Bay FC – Northern League Division One 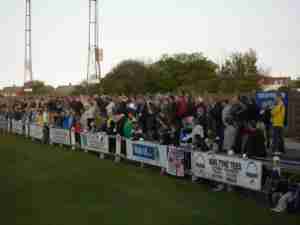 The coastal town of Whitley Bay is simple to find. If you’re travelling by train, you’ll need to alight at Newcastle and then catch a Metro to Whitley Bay station. If you’re driving from the south, follow the signs to Newcastle from the A1 and then just after you’ve crossed the Tyne Bridge, follow the exit signs towards Tynemouth and the coast (A1058) and then you’ll pick up signposts for Whitley Bay. Hillheads Park is located just outside of the town centre, on Hillheads Road, behind Whitley Bay ice-rink and just up the road from the Morrisons supermarket. The two closest pubs are The Seahorse (located at the ground and also accessible once you’ve paid your way in for a match) and The Last Orders, which is located between Morrisons and the ground. If you fancy a pre-match pint in the town centre (a 10 minute walk from Hillheads Park) then you’ll find plenty of fans in The Rockcliffe Arms, a real ale pub on Algernon Place, just around the corner from the Metro station. The match-day atmosphere is fantastic for football at this level, mainly due to a group of fans calling themselves the Bell-end Choir (stop sniggering at the back – it’s because they stand behind the goal, ring a bell and sing for 90 minutes) who drive the atmosphere, regardless of the match being a Northern League fixture or a big FA Vase game (which will see crowds of up to 3,000 rocking the place). If you don’t fancy standing behind the goal on the uncovered terracing, then head for the covered, old-style main stand which has seating at the back and standing at the front. A new stand is being planned opposite this which will provide covered terracing. At the back of the main stand is the refreshments bar, while to one side, in the corner of the ground, is a burger van. The entrance to The Seahorse pub is as you come through the turnstiles, set just back from the pitch. After the match you’re spoilt for choice on where to go – the town has a wide variety of pubs, nightclubs and restaurants, and you can easily stay for the night in one of the many hotels and B&Bs that are located along the streets near the beach. So there we have our first ever official top five non league away days. Now we are very happy to take suggestions on where we should head to re-assess our votes for the next six months, so if you want to nominate somewhere else for us to go to then email us at [email protected]gmx.com and give us a reason why we should come and visit.
Share
Tweet
Share
Pins
Share
Like

About The Shepherds Neame Stadium Salter Lane is a work in progress.  Thanks to the patronage of the local brewers there are some exciting plans in place to change the face of the ground...