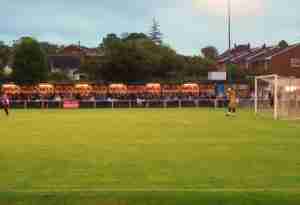 “And so the end is near”…with just a few days left until the start of the Premier League and Non-league seasons there was still time to fit in one more friendly.  And could we have found a better one that just across the water in the heart of the Essex commuter land.  Hornchurch has some interesting memories for me.  A few years before the beautiful CMF came into my life I dated an Essex girl.  Well, dated was stretching it a bit.  Culture was not high on her agenda, but she knew every lay by in and around Upminster and Hornchurch.  Her Dad worked next to Hornchurch Stadium and threatened me on a number of occasions to “take me daarn the Urchins”.  Somehow I managed to avoid that treat as by all accounts the place was a “right dump”.  Before I incur the wrath of any Hornchurch fans this was in 1992 – some time before the club hit the highs and then the lows of the mid-2000’s. This was also my first chance to see West Ham this season.  We, of course knew they would only be bringing squad players to this local derby, but even so some of these would be earning more in a week than the Hornchurch team would earn in a season put together.  At up to £37 a ticket for a game* at Upton Park this season it would be one of the only chances that the Littlest Fuller’s would get to see them. 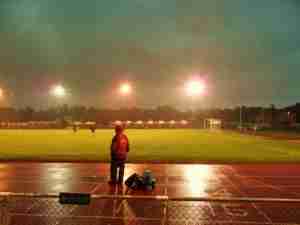 AFC Hornchurch are the phoenix that rose from the flames of Hornchurch FC.  We all know that clubs who throw ridiculous money around are doomed to failure in the long term.  Everyone knows that one day the owners of Manchester City will walk away leaving the club in billions of pounds of debt.  Or they could simply convert the debt to shares as Roman Abramovich has done, although these holdings will essentially be worthless unless he can find a buyer willing to pay his premium.  In the non-leagues such investments, albeit on a smaller scale are not uncommon.  Such events took hold of Isthmian League Three team Hornchurch when a strange European Investment Company started investing in the club. 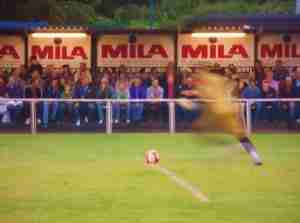 Within a couple of years they had risen up to the Conference South, had hosted a sell out FA Cup 2nd round game against Tranmere Rovers in their redeveloped ground and with a full time squad including ex-Premier League players such as Darren Caskey (today officially the size of a bus) and Dmitri Kharine.  All quite unheard of at this level.  The future looked very bright for the club as they started the 2004/05 season like a train – winning 14 out of the first 18 league games and seeing regular crowds at The Stadium of over 800.  But then murmurings started about the stability of the owners, Carthium Ltd and that started to affect the team.  A FA Cup 4th qualifying win against Gravesend & Northfleet in front of over 1,600 fans saw the beginning of the end.  The club went into freefall, the investment disappeared, the crowds dwindled, the high paid players all left and the club eventually folded, reforming as AFC Hornchurch in May 2005 in time to take their place in the Essex Senior League. Five years on and the club are back again in the Isthmian League Premier Division.  Sensible investment, a couple of good cup runs and a prudent business plan has seen them get into a position to be ready to challenge again for the Conference (Blue Square) South.  Last season they were an outside bet for a play off spot around Easter but as with a few other teams in the Rymans League the ridiculous pressure to complete their fixtures saw the club having to play 7 games in 21 days. 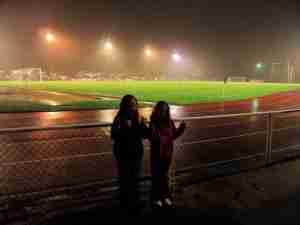 This was a special occasion, as Littlest Fuller was to make her debut for the season.  Not that she really wanted to, but sometimes in life we don’t always get what we want.  CMF was out with her chums so I was on baby sitting duty, and what better option than to take her to football.  I am sure when she is older she will thank me – after all I had sat through the pain and misery that was Cats and Dogs II (in 3D to make it even worse) in the afternoon, so it was only fair that she should endure 90 minutes of pain for me. A quick trip under the Thames and through the country lanes that I knew so well, passing the cows that had seen too much of me when I was younger and we were outside the Hornchurch Stadium before you knew it.  Of course being an English Summer’s evening we were met with rain, rain and more rain. AFC Hornchurch 1 West Ham United XI 2 – Hornchurch Stadium – Tuesday 10th August 2010 Hornchurch hadn’t really marketed the game much apart from on the website, and despite it being a foul evening the crowds had come in abundance.  Over 1,100 in total – and hats off to the club for charging a sensible £5 for Adults and just £2 for kids.  The one thing the ground doesn’t lack is seats under cover although sitting on the edge of an athletics track with virtually no incline isn’t ideal.  The best views of the game actually came from the bar, positioned at one end on the bank, with a nice patio area – not that anyone could enjoy anything but the rain. 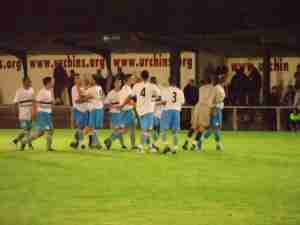 The West Ham team according to the programme contained a number of “fringe” first team squad youngsters – the impressive Anthony Edgar and Jordan Spence were down to play, but of course the actual team looked nothing like that.  It was an Under18’s squad, led by the legend that is Tony Carr.  It is a shame that perhaps one, or maybe two of these will ever see the bench on a Carling Cup 2nd round night, let alone a regular place.  In recent years we have seen Noble, Collison, Tompkins and Hines emerge, but others have simply not had the opportunity.  Some make an impact on the reserve level but in a first team squad of 33 (currently), there are players from 16 different countries, and I would suggest over a third of the squad are “transient” – i.e they will be gone in 12 months.  After all just look at players such as Diego Tristan, David Di Michele, Mido, Ilan – hardly set the world alight did they? Still it was the youngsters we were here to support, although judging by the reaction of some West Ham fans (of the younger variety) they felt that just because they were wearing the Macron shirt they should be Di Canio or McAvennie.  Every missed tackle or poor pass was missed with a “you wanker” or “tosser”.  This was in between deciding which girls in the ground were “legal”…highly intelligent fans. So with the rain, the greasy pitch and the wide open spaces it was hardly a classic.  Hornchurch’s first team for the most part were out muscled by the young West Ham team but it was the home side who took the lead around the half hour mark when West Ham keeper Sam Cowler made a Howler (he must hate his name for just that reason), letting a shot from distance squirm between his hands.  Obviously watching too much Robert Green over the summer? 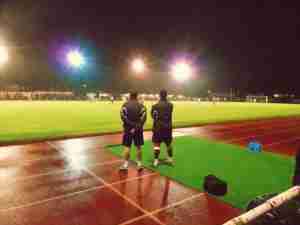 Just as the second half started, so did the heavy rain.  Hardly a pleasant evening to be watching, let alone playing the game.  Our young friends had moved off around the ground to look for more “jail bait” as they said, although one was keen to have a “crack” at the MILF in the hot dog van.  Do they really think that life is just like a scene from the Inbetweeners? West Ham started to pass the ball around a bit better, and actually dominated the midfield, especially with the introduction of Daniel Purdy who is a name to watch out for.  The equaliser came eventually in the 53rd minute when Jack Werndly’s shot took a massive deflection of a defender and wrong footed the Urchins keeper.  As the thunder started overhead with just ten minutes left West Ham scored the winner when Sadlier finished off a nice move with a well hit shot. Did the trip bring back happy memories?  Not really, although on the drive back up to the A127 we did pass a car, with very steamy windows parked in a lay-by. “Look Dad” said Littlest Fuller as we drove past “They must be drinking some very hot tea to make the car that steamy”.  So much to learn about life. *It should be noted in fairness that for the first home game against Bolton Wanderers under 16 members tickets started from £1 More photos from the night can be seen at our Flickr feed here. About The Hornchurch Stadium 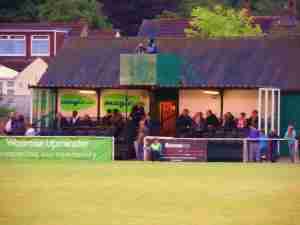 Hornchurch have called “The Stadium” home since 1953 when they moved from Upminster Park.   The ground is predominantly an athletics ground with individual stands placed around the edge.  As the club made a rapid rise through the leagues in the early 2000’s bits were added to comply with various league gradings.  The Riverside side of the ground is so called as the River Ingrebourne runs behind it.  On this side of the ground there are three separate stands offer shelter from the elements although as they are not very steep the view isn’t the best.  On the East side of the ground is the Main stand, flanked by covered terracing. The East side also houses the rather plush, for non-league standards anyway, club shop, bar and restaurant.  At the far ends of each ground is simply a fence around the pitch. How to get to The Hornchurch Stadium 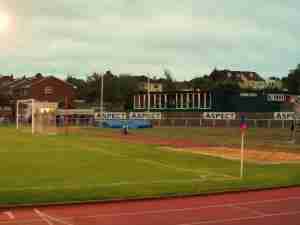 By car – Take the M25 to junction 29 on to the A127 towards London. Come off at the next major turn-off (signposted to Upminster) and turn left into Hall Lane. Follow this road for about a mile and a half, passing Upminster station on your left, until you come to a major crossroads with traffic lights. Turn right at the lights into St Mary’s Lane. Continue down the hill and take the second turning on the left (Bridge Avenue). The stadium is found about 200 yards down Bridge Avenue on the right.  There is a large car park at teh ground.  Alternatively parking is on the streets around the ground, but be careful of some of the parking restrictions.  The postcode for SatNav’s is RM14 2LX. By tube – Upminster Bridge underground station (District line) is a few minutes away. Turn right out of the station, walk under the railway bridge and take the second right turning into Bridge Avenue. The station is in zone 6. 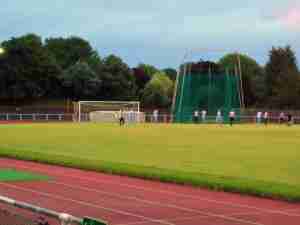 By train – Upminster BR station is the nearest and a 10 minute walk. Come out of station, turn left into St Mary’s Lane and then left again for Bridge Avenue. The station is in zone 6. Getting in at The Hornchurch Stadium Apart from the odd cup game as they experienced a few seasons ago when Peterborough United were visitors in the FA Cup first round it is pay on the door for everyone.  Adults are charged £9, OAP’s £6 and Under 16’s £2.  There is no additional charge to go into the seated areas.  Match programmes are £2.
Share
Tweet
Share
Pins
Share
Like

Manchester United legend Roy Keane has taken a dig at Arsenal by saying he believes Jose Mourinho can afford to rest key players and still take the three points home against the Gunn...