Share
Tweet
Share
Pins
Share
Like
You do feel for clubs that are penalised with points penalties through no fault of the current players or management team.  You feel even sorrier for the fans.  I know from bitter experience as a West Ham fan over the whole Tevez affair that your name can be dragged through the mud and the team suffer (yes, yes I know we should have been relegated but can we let that go now Blades fans) for years to come. But what happens if the penalty happens to a promotion or relegation rival of your team?  What happens if the harsh penalty actually works significantly to your benefit? Where do you stand then?  Deep down you may feel sorry for the club, but outwardly are you not just walking around with a smile that the Mona Lisa would be proud of? Just such an event happened yesterday, April Fools Day.  And whilst the FA are seen as a joke by many in the way they run our national game, especially at grass roots level, the decision was made after midday thus condemning them to another year of being the fool if it wasn’t true (as if they would need an excuse to continue their bizarre running of the game anyway). 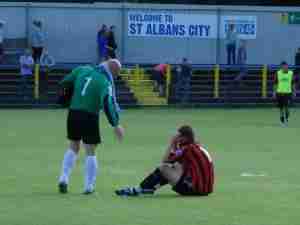 St Albans City, fighting relegation from the Blue Square Bet South had their 10 point penalty for financial irregularities upheld.  The decision, relating back to events from over 3 years ago (!) has effectively relegated the team from the division.  They are now twelve points from safety with just six games to go.  If they do manage to get out of the situation then they deserve a spot in the Champions League.  It is hard to see where the club will go from here, as they have been on the brink of financial crisis for a few seasons now.  In fact on our last visit there in August 2009 saw them at odds with their programme printers and a simple A4 photocopied sheet was available (Another ridiculous FA rule – if a programme isn’t produced a club faces a fine or points penalties). Their misfortune worked in the favour of the other teams at the bottom, including Lewes and Maidenhead United who were also in the bottom three. And guess what the next game of the season is?  Yep, Lewes hosting Maidenhead. 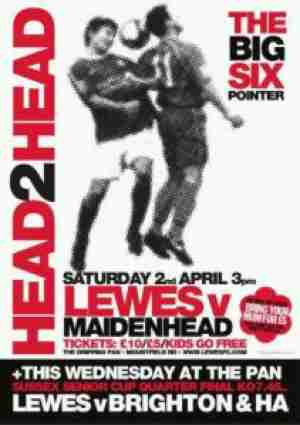 So IF Lewes could win, perhaps rediscovering the Braintree rather than the Dartford /Farnborough /Woking /Ebbsfleet /Chelmsford form then they could potentially climb out of the relegation zone for the first time in months and put five and eleven points respectively between the other two teams in the drop zone.  Six pointer?  This was going to be a twelve pointer! This week also saw the non league loan deadline day – sort of the transfer window for the non leagues.  With few teams able to afford long term signings, the loan system is the only way some teams can compete.  Lewes have used it extensively this season (around 30 players have come in on loan) and so it was no surprise to welcome a few new faces into the squad for the relegation run in:- The Pan needed some lifting after the disappointing defeat in midweek to Brighton & Hove Albion in the quarter final of the Sussex Senior Cup.  With the final being the first competitive game to be played in the new Amex Community Stadium, the prize was tantilisingly good but a strong Rooks team could not overcome the Seagulls.  So it was going to be left to the Lewes faithful to lift spirits as Maidenhead rolled into town. Lewes had been in the news this week for a number of reasons.  Firstly because the press had picked up on the fact Nigella Lawson (and husband Charles Saatchi) had invested in the club.  Not exactly a lie but not exactly true either.  They had both become pioneer shareholders in the club, investing a fixed sum of £1,000 in return for one share in the community club.  Just like over 60 other people had.  The constitution of Lewes FC means that no one can actually own more than one share so I would hardly call this a “proposed takeover” as some people speculated. And then yesterday.  April Fools Day. One of the best football related gags was the news that Internationally-renowned sculptor Antony Gormley had agreed to create a modern sculpture that would be positioned in the currently vacant south-east corner of the ground.

Based on the Angel of the North in Gateshead, the ‘Rook of the South’ would be a 75 foot high sculpture of a rook – Lewes FC’s nickname – with a 100 foot wingspan, constructed of weather resistant corten steel.  Before any NIMBYs got too excited the last line of the article said plans would be available for anyone to see at the club until midday.  I wonder how many people actually turned up? The sun was out and I was being joined for the match than none other that Tom “The Pie Man” Dickinson, a man who knows a thing about football grounds and football cuisine.  Tom recently published the story of his monumental trip around the 92 Premier and Football League grounds, enjoying (well eating at least) a pie in each one.  He was going to be disappointed at the Pan as pies are not on the agenda.  Still a few Harvey’s down his next will drown his sorrows I am sure. Lewes 1 Maidenhead United 0 – The Dripping Pan – Saturday 2nd April 2011 The question that was being tossed about in the Rook Inn pre-match was which Lewes team would turn up today.  The Braintree bravehearts or the woeful Woking wasters.  O’Shea was able to recall Winterton in goal and Joe Dolan at the back after suspension and also added in debutants Paul O’Conner, Andy Hutchinson and Mitchell Nelson. Ninety minutes later we had our answer.  Sure it wasn’t pretty but most of the near 700 in the ground will have seen the improvement in the defence.  Dolan, a man who someone said to be was “more of a donkey than an actual donkey” was immense for the second home game in a row and won a deserved man of the match award.  Breach continues to impress with every game and Nelson added pace that 38 year old Anthony Barness once had in his Bolton days. There was really only one talking point.  As a relatively nondescript first half entered injury time Hutchinson managed to get in front of the defender after a long punt upfield.  From our vantage point at the top of the Jungle we could see him go down under a challenge from the Maidenhead centre back.  At first the referee said “get up” but then out of the corner of his eye, and ours was a waving yellow flag.  The linesman had seen what we had.  PENALTY. 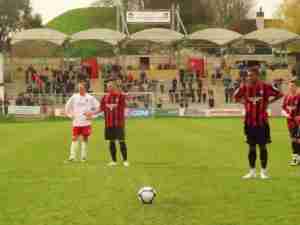 Now correct me if I am wrong here but Hutchinson had got in front of the LAST MAN.  He had been FOULED in the PENALTY AREA as he prepared to take a GOALSCORING OPPORTUNITY.  Add those four facts together and you get……nothing.  The referee did not even book the defender.  Still we had a penalty and Gary Noel stepped up and sent the keeper the wrong way.  As a dancing Patrick Marber informed me mid-embrace “We’ve never lost after taking a first half lead”. There wasn’t the same confidence we had seen in the Rook Inn against Braintree Town.  There was an air of nervousness, especially as scores elsewhere were not as good as could be expected.  But at this stage of the season the fate of Lewes still lays in their own hands.  Four wins from six would almost certainly lead Lewes to the promised land of safety. So what can I tell you about the second half. Erm not a lot really.  I couldn’t even blame the Harveys this week.  It was simply not a good 45 minute period.  Wheeler kept tormenting the full back, Dolan and Breach kept things tight and substitute Danny Buckle (the rather large Danny Buckle) gave the two Maidenhead centre backs a torrid time. 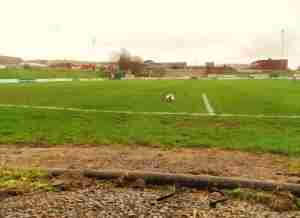 Ninety minutes were up and do you know what? There wasn’t any of the nervousness on the pitch that we had seen against other sides earlier in the season.  In fact it was all relatively calm.  With four minutes of injury time up the Maidenhead keeper decided to go on a run with the ball.  One of those that you try on FIFA 10 where you try and take on everyone in the whole team.  Well he beat Hutchinson and then Wheeler.  As he crossed the half way line the referee blew for full time.  Good job too as he lost control of the ball and Charlie Holness shot just as the whistle went.  The ball, for all it was worth slowly trickled towards the goal, eventually hitting the post and the ball just sat there, like a forgotten toy at Christmas.  The players came over to take the applause, but the ball just sat there, all alone, wanting to take part in the party, but no one invited it in (enough now!). It was now all about results elsewhere.  Five years ago we would all be crowded around a terrace tranny (a radio not a cross dresser!) waiting for the other results, but today there we all were on our iPhones checking Livescore and NLN24 with the full times from Thurrock (won, booo), Dover (defeat for Stortford – yes!) and Hampton (draw – ok). In the space of 24 hours Lewes had gone from relegation certainties to survival fighters thanks to the FA, an eagle eyed linesman and two good old fashioned centre backs.  All is not fair in life, but on a day like today who cares – sorry St Albans City! A couple more snaps here.
Share
Tweet
Share
Pins
Share
Like

er Division where they have played ever since.  The original Moorlands club were formed in 1989 and can claim the Central Midlands Supreme League title to their name – surely a higher hon...