If Heskey can play for England so can Jay

Share
Tweet
Share
Pins
Share
Like
Two weeks ago Fabio Cappello announced his provisional England squad for the World Cup of 30.  For some reason the Italian, as a number of the predecessors did, thinks that Emile Heskey is the answer to all of our problems.  The lumbering, accident prone striker was picked ahead of Carlton Cole for instance who would give the team so many more options. And if Heskey’s good enough for England, then so is Jason Lee.  And why not?  The ex-Forest player has just finished his 22nd season as a player with Ilkeston Town in the Blue Square North league, his 17th club.  Whilst journeyman may be a tag some give him, those who know Jason will know he is a model professional who gives 100% at whatever club he is plying his trade at.  His goal record is impressive – 118 goals in 588 games gives him a strike rate on a par with Heskey. 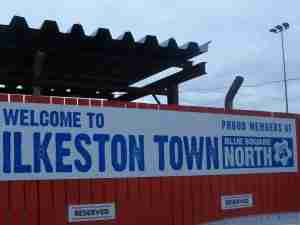 We went up to Ilkeston Town a few weeks ago when they took on AFC Telford United for his debut.  He terrified the Telford defence, showing his class and was rewarded with the winning goal in a 2-1 victory.  As fate then conspired we ended up meeting up with Jason at the airport just as he came back from playing in a tournament in Hong Kong. You were born a stone’s throw from Upton Park.  Did you ever have a chance to play for West Ham? No not at all.  Both Millwall and Charlton Athletic showed interest in me as a youngster. Who did you support as a boy, and is it hard to support a club when you are a professional? Arsenal is the team I’ve always supported;  I went to games as a youngster but after turning pro no longer attended games. I always look for their results and watch them on TV if I can. So how come you ended up at Charlton Athletic? They took me on on the YTS scheme.  At the time the club were still struggling financially – this was prior to the Curbishley era.  He was still at the club as a player and the manager was Lennie Lawrence. Most people think of you as a Nottingham forest player but you really started to make your name at Lincoln City.  What are your memories from your period there? Steve Thompson had gone there a manager from Charlton where I had got to know him.  I had a decent run there, scoring 21 goals in only 93 goals – not bad for a youngster!  I also had the privilage of playing alongside Grant Brown – he was a model pro even at this stage in his career. So how did the move to Forest come about? I had been taken to Southend United by Barry Fry who wanted someone to replace Stan Collymore who had ironically just gone to Forest.  Barry had built a great team spirit there, almost crazy gang-esque.  We had no fear and gave a few of the bigger clubs a right battering when they came to Roots Hall, including Forest. They were struggling up front as Collymore and Robert Rosario were both injured and they were pushing for promotion to the top division.  They had obviously been impressed with what they had seen when we played them so they made an offer for me! The Forest team took the top league by storm when they were promoted.  Was that the best team you ever played in? We certainly had a few really decent players.  A strong keeper in Mark Crossley, Stuart Pearce at fullback and attacking options such as Bryan Roy and Kevin Campbell.  We ended up finishing 3rd and qualifying for Europe – not a bad achievement and one that I doubt could be achieved today. Was playing in Europe a culture shock at all?  After all these were the days before fitness coaches, nuitritionalists and warm downs. Actually we had a nutritionalist and fitness coach in my time with Forest as this was probably the beginning of the process in this country, the Italian’s were already doing this and have always been ahead of everybody else in terms innovative ideas. Third place in the Premier League today is a completely different world.  The kind of wages players at the top end of the league earn today must be a bit sickening for you? Yeah, wages have gone through the roof, but footballers earn what they deserve.  If people want to pump money into the game then surely it should go to the players rather than anyone else. Nottingham Forest, Leeds United, Blackburn Rovers and Newcastle United were probably the last teams that could have broken the top of the table monopoly.  Do you ever see a time when a smaller club could finish as high as 3rd again? Smaller clubs are now happy just to survive in the top flight, which is understandable given the resources they have to work with. For a small club such as Hull or Wigan to break into the top four and qualify for the Champions League would be incredible and something of a miracle. Who have been the best players you have played alongside? Stuart Pearce was the most committed and focused player I have come across.  Bryan Roy brought some real continetal flair to the Forest side and was a great addition to our squad.  Tommy Mooney seemed destined for bigger things at Watford and I am not surprised that Jimmy Bullard ended up playing in the Premier League when we were team mates at Peterborough United. 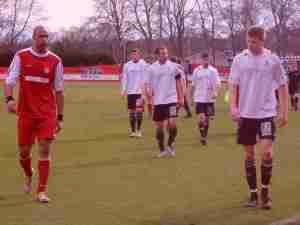 So at the age of 39 years old, and after 17 clubs and nearly 600 appearances what is next for you? Ilkeston Town want me to come back next season (7 games and 1 goal for the Blue Square North side).  I still enjoy playing and doing what I do.  I certainly didn’t think 22 years ago when I was at Charlton Athletic I would still be playing now!  I also still work with Notts County in their Academy and have my own soccer school – Just4Strikers which is designed to help produce the next Jason Lee! Any regrets from your career? Not really.  I have always believed in myself and that has enabled me to keep focused and also to enjoy playing at any level. Many football fans will remember the ridiculous levels of stick that was directed to you, primarily thanks to Baddiel and Skinner.  Do you still feel angry about that? No I was never angry over their jibes, just a little frustrated by the fact that some times my achievements in the game never get a mention.   I was brought in to do a job at Forest, and did that well yet the focus was not on my game.  I’ve since had success playing at every level of the game.   I’ve been promoted from all four divisions as well as within the Non League structure and I have enjoyed every moment.  After all I have played football for over twenty years – a job that I love. You have just come back from playing in the Hong Kong Soccer Sevens for Nottingham Forest.  That must be one of the strangest places you have played? I’ve certainly played in a few wierd places on pre-season tours, but I think Hong Kong in front of 2,000 in a 7-a-side game will take some beating. Who else played in the tournament? 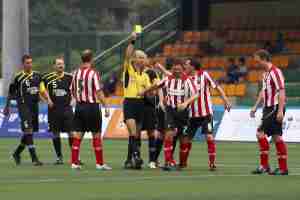 The tournament is a two part one – one for profesional teams including West Ham United and Birmingham City, and one for the “veterans”.  The criteria is that you have to be over 35 years old but can still be playing.  Apart from myself there was Nigel Jemson, Darren Wassell and Peter Davenport – quite an attacking force.  We was up against a few local teams as well as the Southampton Lloyds TSB Masters and Andy Cole’s All Star team.  We reached the semi-finals of the Plate competition, beating Southampton on the way before losing to eventual winners Team Bondi. It was a great experience and good to catch up with some old “pros”  and some of the games were refereed by Mike Riley. There are far too few model professionals in the game today.  It is hard to see some of the Premier League “stars” of today still being in love with the game at 39 years old as well as preparing to play their game lower down the league ladder AND giving something back to the game through his coaching and the soccer skills academy.  We salute you Jason and hope that we still see you playing in years to come.
Share
Tweet
Share
Pins
Share
Like

Please note that for the foreseeable future Sittingbourne will be playing home games at Woodstock Park’s ground. About Bourne Park After years of uncertainty, Sittingbourne now have a...