Share
Tweet
Share
Pins
Share
Like
The next few weeks could be pivotal moments in the history of Kentish football.  For far too long Gillingham have held the monopoly as Kent’s only league team but that could soon change.  Whilst Ebbsfleet fight with relegation after the glory years of the Myfootballclub.com ownership fade away there could be a challenge both from Dover Athletic who are poised for a play off spot to reach the Blue Square Conference after a long absence, as well as from Dartford who are just one game away from promotion to the Blue Square South.  Of course it is more than possible that Dartford may find themselves next season with local derbies against Ebbsfleet (should they be relegated) and Dover (if they fail to progress in the play offs).  Good times indeed. The Fuller family have a long tradition of supporting Dartford as a second/third team.  As part of an article I have been researching about “My first game” my brother regaled me of a couple of classic stories from the early 1970’s when Dartford were in their golden period, including the club’s one and only visit to Wembley in 1974 for the FA Trophy final where they lost 2-1 to Morecambe. They also won the Southern League in that season which entitled them to apply for a place in the Football League, but with so many other clubs ambitions under the old “re-election” system they did not get enough votes for promotion. 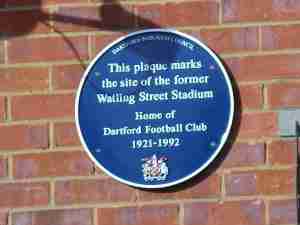 The following season they played a strong Wimbledon team in the Southern League which included Dickie Guy in goal (who was later to find fame in saving a penalty in a cup game versus Leeds United) and a certain Dave “Harry” Bassett who was sent off in a 2-0 defeat.  So what was special about this?  Well it was the club’s third game in four days over the Easter period!  The following season the club reached the first round of the FA Cup and lost narrowly at Watling Street to Plymouth Argyle.  However one story that he remembers from the season was a game versus Grantham Town when fed up with the stick he was getting from a particular home fan, the away goalkeeper hurdled the fence around the pitch and chased the fan into the car park, whilst the game carried on for a couple of minutes in his absence.

The decline of the club in the 1990’s has been documented in detail elsewhere and the part played by Maidstone United’s move into Dartford’s Watling Street ground. But after a significant period in the wilderness, sharing grounds with Erith & Belvedere (technically sharing with Welling United), Purfleet (now Thurrock) and Ebbsfleet (or Gravesend & Northfleet as it should be known) they returned to a new purpose built state of the art stadium in the town in 2006.  The ground has won a number of awards for its futuristic design and use of “green” methodologies – in fact fashion designer Wayne Hemmingway once described the stadium as “the best in the country”. So after a steady rise up the lower non-leagues the club finished 8th last season in the Ryman’s League Premier.  However, this season things could not have been better for the most part.  They climbed to the top of the table after the second game of the season and have stayed their ever since.  Apart from a little wobble post Christmas their form has been imperious and promotion as champions was odds on.  They are without doubt the biggest team in the division, and will also make a serious challenge next year in the Blue Square South both on and off the pitch. We had been down to Princes Park before, in March 2007 just a few months after the stadium opened when they beat Croydon Athletic 3-0 in front of a few hundred.  But after the annual TBIR garden spring clean (which included breaking a £500 lawn mower) I was given permission to head off to their game with Canvey Island for being such a good boy. At exactly 10 miles from TBIR and just 17 minutes down the road it was one of the easier grounds to get to, and after leaving home at 2.15pm I was in the bar enjoying a cold pint less than half an hour later. Dartford 2 Canvey Island 1 – Princes Park – Monday 5th April 2010 With the sun shining at last the locals had come out in force and took their place behind the Canvey goal but it was the away fans who made the most noise early on, spurred on by some indecision in the Dartford defence.  It is often the case that teams who for so long have dominated the league start to doubt their own ability with the finishing line in sight and this was the case for long periods in this game. 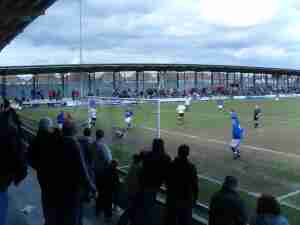 And consequently it did not come as a surprise when Canvey took the lead from such indecision when Greg Cohen smashed the ball home after the Dartford Keeper, Andrew Young had failed to clear the danger.  The away fans (of which there was no more than 20) when wild…”We’re going to win the league”, “You only came to watch the Canvey” and my favourite “Sh1t ground, no fans”. As the half progressed the referee Mr Harris seemed to want to get involved more and more in the game – but not in a proactive way.  He showed little consistency, seeming to give every decision to the away team in a tetchy first half.  Canvey played a flat back line with an offside trap which whilst effective was crap to watch.  My view is that the offside law should be scrapped at this level to make games more entertaining. 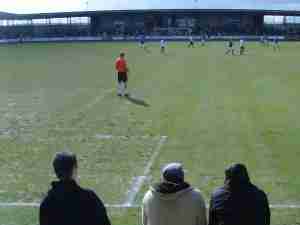 Half time came and Dartford trudged off with a need of an injection of confidence.  Manager (and Director) Tony Burman made some changes bringing on Rob Haworth who was soon booked for “persistent fouling” which was impressive considering it was his first challenge!  Dartford continued to struggle until the 68th minute when Danny Dafter (name of the day, closely followed by Canvey’s Gabriel Fanibuyan) was allowed to run unchallenged through the Canvey defence before his pass found Danny Harris and is miss hit shot fooled the keeper and the ball rolled into the net.  Game on! With news filtering through that Kingstonians and Sutton United losing, Dartford sensed blood and went for the kill, finally starting to put the Canvey defence under pressure, and with 12 minutes to go Ryan Hayes crossed to the back post and Elliot Bradbrook stormed in to head home. 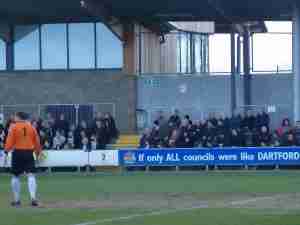 The home fans, of which the 1,319 was bigger than every game bar one in the Blue Square South and North, and bigger than three games in the Blue Square Premier including local rivals Ebbsfleet United. They left licking their lips at the prospect of promotion with a win away to second placed Kingstonians in a few days time.  Welcome back Dartford! For more photos from the game click here.
Share
Tweet
Share
Pins
Share
Like

About The Robert Parker Stadium The ground was opened in 1986, although most of the developments followed later. The Main Stand, pictured right, was opened in 1998 and has been expanded ...