Share
Tweet
Share
Pins
Share
Like
Question: What do you get for £400 at West Ham United, £250 at Reading, £120 at Lincoln City and £50 in the non-leagues? Answer: To have the privilege to run out onto the pitch as a mascot (children only before anyone gets too excited!) And what do you get for that?  Well in the case of Lincoln City, just abouteverything actually..For your £250 at Reading you have to supply your own kit, West Ham you get a copy of Match of the Day on DVD but what about your £50 at the non-league level?  Well read on to find out… 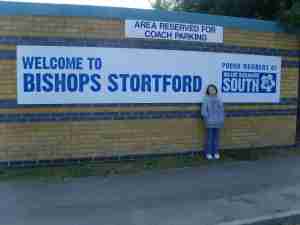 So this weekend we headed back up the M11 for the battle between two of the worst teams in the Blue Square South based on current form.  Bishops Stortford, with just one win from their last six and Lewes, with three draws and three defeats from theirs was hardly impressive form, but for one day the football was taking a back seat.  You see since coming to Woodside Park back in September we have had a soft spot for the club thanks to their general outlook on the football world, and we noticed a bargain when we saw one.

And so when the whole TBIR family drove into the car park at the ground at 2pm, it was not just to watch the game but to “be a part of it” as Carlsberg would say.  For not only was this very blog sponsoring the Match Ball, but the littlest Fuller’s were both mascots.  And as an added twist, Lewes official photographer, match reporter and general man in the know, James Boyes, was unable attend so he asked me to pen the details and snap a few snaps.  One hat tick, two hats hmm, three hats you what?  But four hats.  Well with a head as big as old big head himself I decided to give it a go. 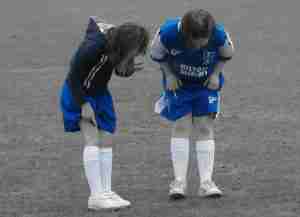 I will not reveal how much of our hard earnt beer money had to change hands but when I was told by John Turner, the club’s commercial maestro and officially in the “Footballest nicest man” gallery about the deal he could do me, I almost bit his hand off.  Christmas presents sorted all round.  It wasn’t about the fame and fortune that goes with sponsorship at this level (after all look what happened to Bob Evans Taxi services Ltd when they sponsored Dorchester recently!) but it is about putting something back.  John himself welcomed us in, sorted kits out, signed programmes and a tunnel pass before explaining he doesn’t do this to make a profit, but to “see the happy faces of families”.  FIFA 5 stars to you John. With the EFW team rolling into town as well with the Lewes Lunatic Fringe it was sure to be an interesting afternoon.   The girls were excited.  In Lolly’ s case it was same old, same old as this would be her third run out in the middle.  Nothing like the big stage as she had previously led out London Irish at Twickenham (aged just 3) and last year England Under 21’s versus France.  However, this was all new for Littlest Fuller and her nervous excitement was probably due to the fact she was going to her first ever concert at the O2 for the X-Factor Live at 7pm (oh how I was looking forward to that one).  It was also a rare afternoon out for CMF as she is normally on child care duties, but today was enjoying the facilities to the full with an offer from me to act as chauffeur for the day. 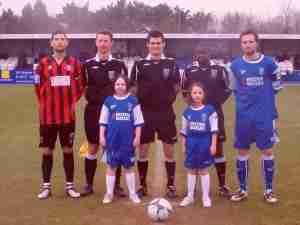 So after the girls were kitted up and taken to be amused on the pitch by a couple of the Bishops Stortford girls team we were able to enjoy a well earned beer for being “The Best Parents in the World”, apparently.  Now there are a few things you never see at football.  I have never seen a badger, or a Reliant Robin, or even a photo of Jimmy Saville.  But I had also never seen a vicar, complete with his dog-collar on.  And outside of football I had never seen a vicar carrying a drum, nor a drummer selling raffle tickets.  But here, in the bar was a drum carrying, raffle ticket selling vicar.  One for the trivia album!  The buzzer sounded and it was time to see the girls big moment.  “Just wander onto the pitch if you want to take pictures – the referee wont mind” added John as they walked out…so we did. Stortford had just about accumulated enough points to avoid the drop from the Blue Square South.  Essentially, Weymouth were down already, and then it was two from three involving Weston-super-Mare, Worcester City and Lewes.  So this game could either keep Lewes’s season alive for a few more weeks, or put the home team 15 points clear of the drop zone.  Since our last visit top scorer Charlie Sheringham had driven up the M11 (and along the A14 for a mile) to Histon, leaving the blues without a striker, and it is no co-incidence that since his departure goals had virtually dried up. Bishops Stortford 0 Lewes 0 – Woodside Park – Saturday 20th March 2010 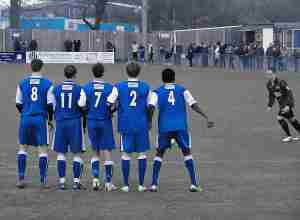 Last week we wrote about our trip to Odense in Denmark under the heading “Never go back”, and that is exactly how Stortford returnee Duane Jackman must have felt as he hobbled off in his first game back at the club after fifteen minutes following a clash with Rikki Banks in the Lewes goal.  One became two when they lost a second player a few minutes later.  Two substitutions in the first twenty minutes?  It had to be Lewes’s day surely.  After failing to win a league game away from home for well over a year could this be their day?  The team came into the game seven points from safety but with two games in hand and an all important six pointer away at Worcester in a few weeks time, and they certainly tried to play like they meant to win. 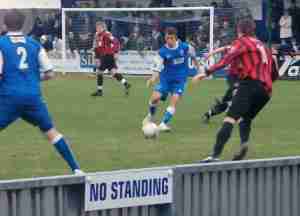 The Lewes Lunatic fringe stared in disbelief when Walder’s shot skimmed the crossbar and the giant Nick Morgan in the Stortford goal had to make a good save from Jack Walder soon after.  The girls busied themselves in the first half by taking pictures and mocking a young Spurs shirt wearing lad who thought it was like something out of The Firm or Football Factory to run across the terrace we were on shouting “You can’t score”, “You are going down” and “You’re not going to score in a minute”…Tell us somethng we don’t know! 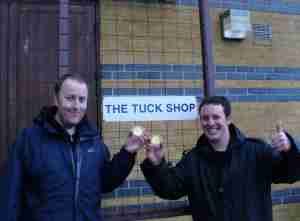 After a brief half time cup of tea in the boardroom, adorned with the glories of yesteryear, and of course the smiling mug of Jeff Stelling on the wall telling us about the latest scores from the rest of the country it was back out into the action.  Danny and Deaks, both sporting fetching TBIR badges for the day had brought their cakes with them and taunted the rest of the away following with “We’ve got cakes, we’ve got cakes, you ain’t”. 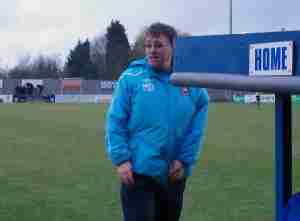 So what can I remember about the second half? Well it rained, alot.  Neither team created a chance until the 75th minute when Stortford’s Reece Prestedge should have scored when set up by a great run down the wing from Pavett but he headed wide and we spotted the Stortford Manager Mark Simpson sporting a West Ham tracksuit top whilst parading around in the technical area with the initials “MD” on, which is a tad strange.  Simpson certainly didn’t like the major incident in the second half, going ballistic at the linesman when the referee sent off Ali Abdullahi near the end, not realising that he had been booked already.  It was the first time I had heard a manager apologise for his words in a long time. 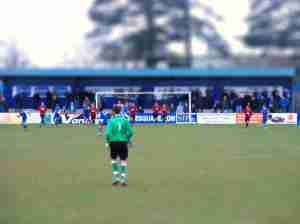 So with time ticking down the final chance to wrap up all three points fell to captain Anthony Barness when his shot from distance through a crowd of players failed to take the necessary deflection and Nick Morgan smothered it well with a host of Lewes players waiting for a mistake.  Nil Nil it ended and it hadn’t been a classic on the field, but off it it was a great afternoon out for the girls. After a few handshakes in the boardroom and a quick pork pie we were off down the M11 for a night with the X-Factor finalists.  Whatever you do Lewes, “Don’t stop believin'”… If you are desperate for some more, have a read of the EFW day here. Video thanks to Ben Dellows from Bishops Stortford FC
Share
Tweet
Share
Pins
Share
Like

Manchester United are in advanced talks with Real Madrid for Welsh star Gareth Bale, according to Daily Star. Bale, 27, has made 38 appearances for Real so far, but reports suggest that ...